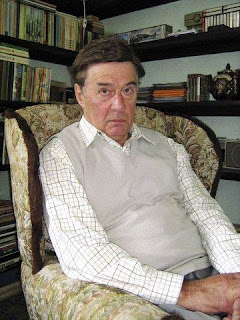 Here’s a nice little local story explaining what life was like at the start of WW2, through the eyes of a seven year old lad, Harry Bancroft, who was born and bred on a farm in the village of Oxenhope near Keighley.

Harry recalls it was a beautiful, sunny, late summer day when war was declared. He was seven and lived at Stones Top Farm in Oxenhope. “At 11am we heard, on the radio, Neville Chamberlain, the Prime Minister, pronounce the fateful words ‘this country is at war with Germany’. So that was it; we faced a very uncertain future.

“A popular hobby at that time was collecting cigarette cards. The set I was collecting was entitled ‘Speed’ and featured record-breaking planes, trains, cars, motorcycles and speedboats. On that Sunday morning, I tore up every card that had anything of German or Italian origin as its subject.
“It was thought there would be an immediate blitzkrieg, but that did not come. However, a plan was put into force to evacuate all children from major cities to ‘safe’ areas. Oxenhope C of E School had its numbers increased by an influx of these evacuees.
“Not only were schoolchildren evacuated, but whole families as well. The Direction of Labour Act meant that you could be sent to wherever it was thought you could be most useful. We rented part of our property to Bert Holt, a skilled engineer, who had been sent to work at a factory at Bocking. The family came from Liverpool, and Bert took to country life with enthusiasm.

“He was in the AFS (Auxiliary Fire Service), and they had a fire tender based at Whin Knowle. The one time he nearly went into action was when the lathe at Pinhill End Farm caught fire.

“There was a lot of humour during the war. There had to be – laughter was a powerful weapon. But the war was grim for those on the receiving end.

“Air raids did not occur straight away, but by 1940 Göring’s Luftwaffe got down to its grim business. One winter, as I lay in bed with a childhood illness, there was the drone of German bombers passing over on their way to Liverpool or Manchester. ‘They won’t waste their bombs on us,’ my father said reassuringly.

“At Stones Top Farm our air-raid shelters were very much do-it-yourself affairs. One that I well remember was in a corner of the lathe under the hay. It would have been very effective protection against a blast, but hazardous if incendiaries were dropped! I recall it being used on the night Bradford was bombed, which, I think, was the most alarming of the war as far as Oxenhope was concerned. I remember the sky being filled with the sound of aircraft engines and a red glow in the sky in the direction of Bradford. That was the night that the fish market on John Street and Lingard’s department store on Kirkgate were set on fire.”

Harry also remembers walking back to school after dinner, and seeing a German bomber flying very low. “The thought that I might have been machine-gunned never occurred. There it was, dark green with the black crosses outlined in white,” he said.

During the war it was decreed that every farmer would plough a percentage of his land and grow a crop. At Stones Top, this was kale for cattle fodder. “The ploughing turned up a lot of stones, so a stone-picking afternoon was organised.” But, according to Harry, “as a child the greatest deprivation was sweets, which were strictly rationed”.

He concluded: “Many families in Oxenhope lost husbands and sons; not on a scale like the First World War, but that is little consolation to a grieving family. As the victorious allies swept through Germany and the occupied countries, the full horror of the concentration camps was revealed. Sad to say war still goes on.”

[I am grateful to the " Down Your Way" magazine, where these details came from.]