Oxenhope in the Great War 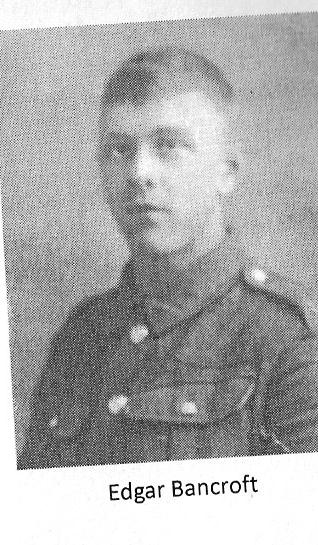 I recently read a book called “Oxenhope in the Great War” which was a very informative story about how WW1 affected this little village in Yorkshire and the lives of the men and women who lived there, where 370 men left home to serve King and Country and 54 of whom never returned.
Usually my articles about WW1 are tinged with sadness about all the young lives lost during this terrible conflict, but in this article I want to talk about people who survived, In particular one individual called Edgar Bancroft who was born in the village, was called up in 1916, and not only survived the war, but stayed on for 6 months after the end of the conflict in the army of occupation in Germany because he wanted “ to have a bit of smooth after the rough!” 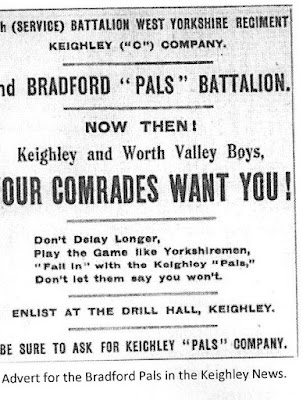 As in most areas of the country, many men volunteered to fight, and the above newspaper advert uses comradery and patriotism to try and persuade men to sign up, and many did. The 2nd Bradford Pals Battalion of the West Yorkshire Regiment visited Oxenhope on a recruiting parade and on 24th March 1915. The men, women and children of Oxenhope, who had been taken out of school that day all watched as the soldiers marched and were welcomed in the village.
Edgar was born on 3rd November 1897 in Oxenhope, the younger son of Alfred and Sarah [nee O’Hara]. Alfred was a master tailor, who later in life became a farmer and cattle dealer living at Stone Top Farm. Edgar became an apprentice plumber, working in Keighley for a Tom Slater.
He was called up and enlisted with the York & Lancaster Regiment on 12th September 1916, and travelled by train from Keighley to Halifax, where he reported to the Duke of Wellington’s Regiment at their collecting depot. From there he was sent to the transit camp at Clipstone near Mansfield, and was the youngest man in the hut. After training, he went to France, travelling overnight by train to Dover, then drafted out to Abbeville and St. Omer. 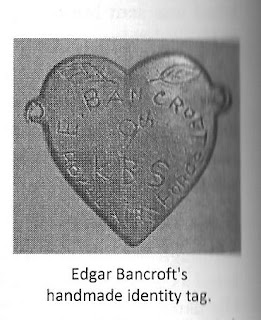 He did not go into combat immediately, but eventually served at Ypres and Passchendaele. One of his memories there was standing directly behind a gun and watching the large shells for a second or so as they went down the trajectory. Some of the guns were huge and before a battle when the artillery put over a massive barrage, the ground would shake like a jelly, and the guns would leap into the air as they recoiled.
He joined the Machine Gun Corps when volunteers were called for and was given two days leave as a reward. Sixty other lads who hadn’t volunteered were also drafted into the MGC, but without any leave.
Edgar was later transferred to the Royal Flying Corps and the 9th Kite Balloon Squadron, and he would watch the officer go up in the balloon to check and correct the range of the artillery fire. However, sometimes the Germans sent over a plane to shoot down the balloon, and when the officer saw it coming, would have to quickly parachute out. One particular morning this happened several times.
As mentioned earlier, at the end of the war Edgar was asked to stay on for an additional six months, and went to Germany with the army of occupation, and was most impressed with the city of Cologne. Although he was offered promotion to sergeant, he declined to stay on any longer, and was demobilised on 7th August 1919, transferring to the RAF Reserves. 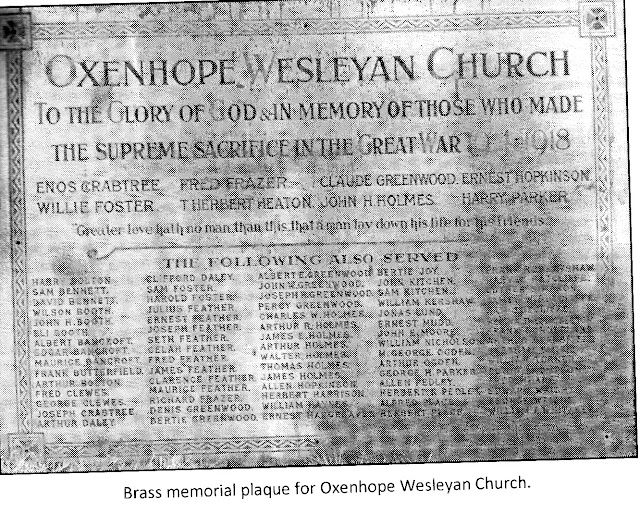 Edgar is named on the Oxenhope Wesleyan memorial.
He died, age 65 years, on 1st March 1962. 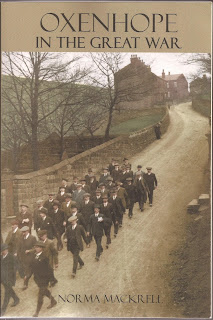 [I am grateful to be allowed to use extract from the excellent book “Oxenhope in the Great War” by Norma Mackrell. Anyone who wishes to purchase this book, the profit of which go to Manorlands Hospice in Oxenhope, can do so on the following website.]
https://www.feedaread.com/books/Oxenhope-in-the-Great-War-9781786975065.aspx