As a child of 8-9 years, I remember being taken on a school trip to a local pottery factory, at “Soil Hill” which was a large hill near our school at Thornton nr Bradford. In those days, school trip were not as adventurous as they are today, and had to be close to home, due probably because money was not as ready available as it seems to be today.

I can still remember the class’s excitement at this half day outing to this place about a one mile walk from the school, with a sandwich and drink in our backpack as we set out on our big adventure.

The pottery tended to specialise in making large brown earthenware pots and jugs, of which many still survive today and are highly valued, and were all thrown by Mr Isaac Button who ran the place on his own.

A large collection of Soil Hill pots are on permanent display, together with many photographs, at Cliffe Castle Museum in Keighley. Here are pictures of some of them. 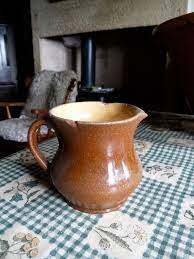 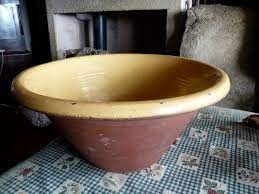 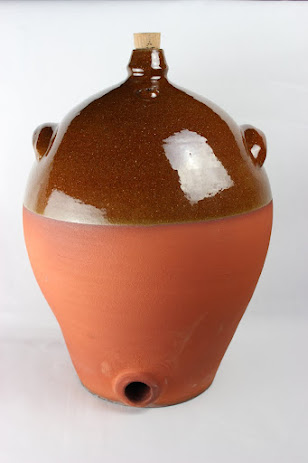 There are records of a pottery being on site from the late 17th century and it came into the Button family when Mr. Isaac Button [senior] bought the company for £800 around the year 1900. Mr. Button re-built the Pottery just a bit lower down the site and up until 1965 it remained with the Button family until his son, also called Isaac, retired.

Around 1900 England had only around 100 Country potteries and sadly by the end of the depression no more than a dozen. At Soil Hill, before the first world war, the pottery employed 13 men, but as time passed Mr Button ended up working the pottery on his own due to him not being able to find anyone to take an apprenticeship with him so 18 years passed on his own which meant he had to dig the coal and fireclay/mixed the clay/formed his produce and fired the kiln all alone. The site itself had sufficient quantities of clay and coal for his needs, and the picture at the top of the page shown what remains of the buildings used for this purpose

He was renowned for making a ton of clay pots in any 1 day, in fact he was once timed from throwing the lump of clay onto the potter’s wheel and producing an excellent pot then cutting it off using a wire cutter took him 22 seconds, 120 pots in any 1 hour and up to 1200 in any 1 day. There is an excellent short 5 minute video showing the inside of the building together with Isaac throwing some pots and bowls on his potter’s wheel here.

Isaac's strength and endurance were Herculean. The ton of clay he could pot in a day he dug himself from the hillside. Each firing of his 500 cubic foot kiln had to be stoked with two and half tons of coal at six firemouths. That kept him up for 48 hours or more at a time, during which he would climb on to the hot kiln roof, even in gales, to pull out test firings.

Once he had emptied the kiln he would begin barrowing to the wheel blocks of clay that he had processed: first blunged (mixed with water), sieved, dried on a stone floor heated by the kiln and twice pugged (compressed); all the time he smoked his pipe.

I can still remember what Isaac Button looked like….an old man in his 60s, [not so old now, but when you are only 8 years of age, everyone older than your parents seemed old!]  He always seemed to have a pipe in his mouth as he worked at his turntable casting these large brown pots as he gave our class a demonstration into this skilled craft, while our teacher told us all to pay attention and stop talking.

Sadly the site is now largely derelict, and just used for farm storage. The kiln is still recognisable, although in a sorry state as shown here.


And the clay extruder, which I can still remember seeing pushing out a long tail of clay after Isaac had filled it is barely recognisable as the important piece of equipment it was in its day.

The Soil Hill area today has been developed into a large quarry extracting “pudding clay” which general uses  includes lining for flood defence schemes, pond/lake/canal or reservoir lining , capping or lining for landfill site and mixing with higher grades of clay for the manufacture of bricks.

There is a Bancroft connection to the Button family, as Isaac's sister, Francis, married a William Bancroft on 27th April 1922  at Halifax Parish Church.  At the time of the marriage William was a 47 year old widower described as a 'Traveller', and Francis was a 48 year old spinster.

To finish this article, here’s a nice picture of Isaac carrying bowls he has just made.