The Bancroft Brothers - Tailors of Haworth


I was recently given a large cardboard box of items, which had originally been deposited at a local solicitors, on behalf of an Emma May Bancroft, who died in 1970, an unmarried lady, who was the last surviving member of her particular line...and what an interesting assortment of papers, letter and photographs it turned out to be!

Emma May's father George, turns out to be a very interesting and rather "well-to-do" person of some note in the area. He, together with his three brothers, Abel, William and John Thomas, all ran tailoring business's in the area and he was, amongst other things a Grand Master of the local Masonic Lodge as well as a substantial property owner who at the time of his death in 1915 had at least eight houses and some land in and around the local area of Crossroads nr Keighley

The collection, as well as having the usual collection of photos, letter and personal items also had many rent books recording the weekly rent collected from his various properties both by him and later his daughters.

George was born in 1860 at Brow Top nr Haworth, the fourth of seven children of Abraham and Martha Bancroft [nee Sutcliffe] and married Maria Wood at St John's Church, Ingrow, Keighley on 18th June 1895.
They went on to have two daughters, Emma May in 1896 and Hilda in 1900, neither of whom were ever married.

A rather non-descript exercise book in the collection hold a nice secret....amongst dozens of recipes is one for Maria's  Wedding Cake, or "Bride Cake", as it was know then. Her recipe is shown below with that special  ingredient...."1 shilling worth of brandy" !
﻿﻿﻿

﻿﻿﻿The following picture shows George in full  Grand-Master masonic attire, but it is not clear exactly when he took on this role. It is is thought that it was between 1900 and 1915, when he was probably seen as an important businessman in the local area. The Masonic Lodge is still there at Mill Hey Haworth, close to where he was living  and running his tailoring business at the time and he, no doubt, was able to get lots of business from his lodge connections. 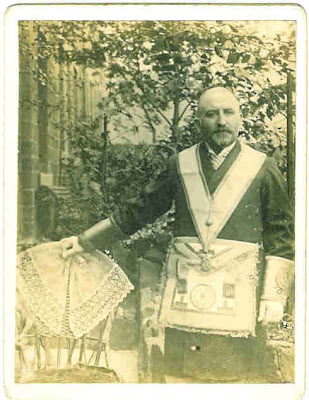 George died on 24/11/1915 at the relatively young age of  55 years, and  his estate with all the properties he owned together with his list of other assets and cash were valued at  over £1500.
He was buried at Slack Lane Baptist Chapel, Oakworth with his wife Maria, and later their two daughters. Unfortunately the gravestone is now in a sad state, as can be seen from the following picture no doubt because the family line has died out and no one is left to attend to it. 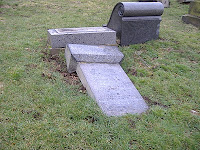 After the death of George, it was left to his brother William [Willie] to continue the Tailoring Business. The advert below shows the extent of his business and he was able to boast " Good Workmanship and a Neat Fit Guaranteed", and lists an interesting collection of items and services he was able to provide such as
" MOURNING ORDERS  executed with despatch"

The rather faded picture below is believed to possibly  be William at work in his workshop at Hebden Bridge Road.


﻿
William carried on in the tailoring business until his death in 1932, at the age of 73 years. His obituary in the local newspaper described him as "having carried on business as a tailor and outfitter for many years, and was a well known tradesman in the Worth Valley. His funeral was attended by a large number of friends and fellow tradesmen".
He was buried at Haworth Church graveyard, and his Will lists his estate as being valued at about £3000, of which over £1300 was from a war-loan which had been left unclaimed from the First World War.

[I wrote an article some time ago about Maria Bancroft and details from a school book which she wrote  in the 1870's. This can be seen by clicking here]
Email ThisBlogThis!Share to TwitterShare to FacebookShare to Pinterest

What a beautiful story and what a beautiful pictures. George was born one year before Patrick Bronte died. I don" t think Patrick knew him.
What is history interesting, don't you think? I will link your story to my weblog about the Bronte Sisters. Is is a nice story over Haworth.
Greetings from Geri from the Netherlands.