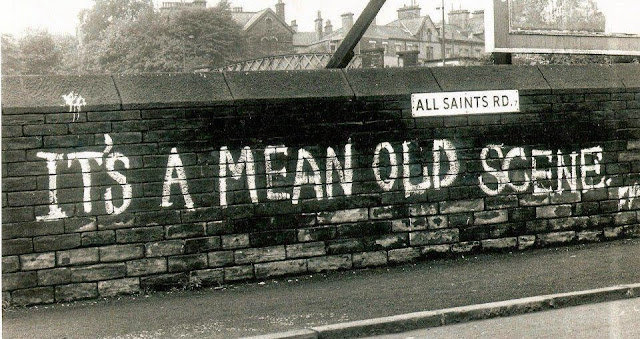 On first glance the above shown graffiti might look like wanton vandalism of the worst kind,  written on a wall by some mindless idiot…but read on and here is the story of one of the most iconic images of Bradford in the 1960/70.


When I first started work in Bradford in the 1960’s, I used to pass these words written on a wall on All Saints Road and wonder what the author was thinking when he wrote this, because to me, Bradford at that time was booming with its Wool Industry keeping over one hundred mills working day and night and employing a large percentage of the population….it didn’t seem like ‘a mean old scene' to me!

No one really knows who wrote this, but rumour has it that it was written by a university student called Graham Little in 1969, who went on to be part of a local Theatre Group.

On closer inspection of the letters, particularly the ‘E’, ‘T’ and ‘S’s it was clearly written by someone with artistic tendencies, perhaps an art student, or at least someone who practiced calligraphy.

Over the next few years many Bradfordians came to love seeing the wall with its meaningful words, so much so that the head of Bradford Council’s clean-up team is rumoured to have kept putting the removal notice to the bottom of his pile.

Some years later, when a car hit the wall and partially demolished it, the council were forced to lower the height of the wall when rebuilding, and partly destroy the graffiti....then someone came along and rewrote it with the new phrase ‘It’s still a mean old scene’!

Many people came to look at it, and appreciate it over the years, so much so that a Jim Greenhalf used the image in a book he wrote called ‘ A history of Bradford from 1974’, and someone else called Pete Coe, even produced a folk music record with the phrase of the title track.

There is also a blues song written in the late 60's by John Mayall called ' Double Crossin' Time' which uses the phrase in it's first line.


There were even tea-shirts produced with it shown, depicting the Bradford Boar as well! 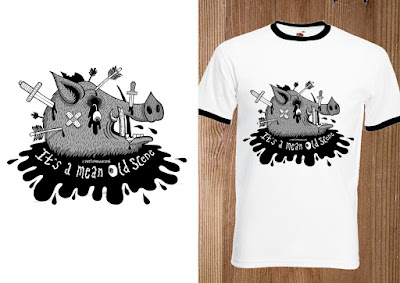 Sadly, had it been a modern day 'Banksy', I’m sure it would have been moved and reassembled in the local museum today but like most things, nothing lasts for ever, and the image has now long since gone…..but not forgotten in lots of local people’s memories.

[When I was research for this article, I posted a request for more information about this and received literally hundreds of messages from fellow Bradfordians who had fond memories and anecdotes about this iconic feature…..thank you to them all.]
Email ThisBlogThis!Share to TwitterShare to FacebookShare to Pinterest

i remember the mean old scene having lived at dirkhill rd bradford at margaret mcmillan. it was sad to see it go.

its also referenced by the Bradford Band New Model Army, the track BD7 , tells the story of it being taken down and re written as its still a mean old scene. They often mention places in Bradford in their songs

Other wall graffiti from the Little Horton area, and in the same style, that I used to pass a lot:

I keep looking for photos of those.