I spent a very pleasant evening recently at the rehearsal room of the Haworth Brass Band, which is on the old cobbled main street in the village of Haworth, listening to one of their regular weekly practice sessions. The reason for my visit was to research information from their old minute books about James Bancroft [1836-1921], who had a long association with the band as it's leader and as a  cornet player.

James Bancroft, was born on 2nd July 1836 , and baptised by the famous Patrick Bronte at Haworth Parish Church on 27th November 1836. He was always known as “Jim o’ Abes”, which was the local way of saying James, son of Abraham. It was quite a common practice in those times to give people a nickname such as this, particularly where there were several people with the same name in a village....and there were several 'James Bancrofts', both related and unrelated, in the area around this time.

James’s father, Abraham, must have led a hard life, working most of his life as a hand loom weaver from his small cottage in the hamlet of Oldfield near Keighley.Unfortunately he ended his days in the Keighley Workhouse, where the 1891 census describes him as an ‘imbecile’ at the age of 78 years, which today would probably describe someone suffering from dementia. He died in 1893, and I wrote an article about life in the Keighley Workhouse, which described the terrible conditions at the time, and the soul-deadening drudgery the inmates had to endure which can be read by clicking here.

James started his working life at home as a woolcomber and weaver, no doubt helping his father prepare wool for their hand loom. He married Maria Smith from the nearby village of Oakworth on 28th April 1860 at Keighley Parish Church and interestingly the marriage certificate wrongly states his father as being ‘Edward Bancroft’ as the following copy certificate shows.

By the time of the 1861 census James and Maria are settled at 104 Lidget, Oakworth, with a baby daughter Ada, and he is now shown as a worsted weaver at one of the local mills. From then on his career continued to improve and by 1871 he had become a weaving mill overlooker, a job which he continued with for the rest of his working life until he retire at the age of 76 years from Clough’s Mill at Ingrow in Keighley.

So how did James become involved with a Brass Band in Haworth?....here is the how it all began.

As far back as 1854 there was a Brass Band with a body of excellent performers at Ponden, near where James grew up, which was founded by a John Heaton who was a large land-owner and lived at Ponden Hall. They had the honor of playing at a peace celebration in Haworth at the conclusion of the Crimean War. At that time there were also some young Haworth men who were keen instrumentalists,but who did not belong to any band, and because of local band rivalry tended to move from one band to another.  On occasions some of them, assisted by the Ponden performers would get together to play, and on one Christmas morning in the early 1860’s the group were out ‘busking’ on Haworth main street when they  were heard by a local mill owner, Mr. Hartley Merrall, of Spring Head Mills, who was on his way to the service at the Parish Church. Mr Merrall was himself a keen musical, and there and then invited the group of players to his house that evening as he was determined to have a brass band of his own, to compete with other local businessmen in the area who financed bands of their own.. This is how the Spring Head Band, named after his mill, came into existence, and was the forerunner of the Haworth Brass Band. James Bancroft was amongst this group and he was appointed leader, an association which continued for nearly 60 years. Mr. Merrall continued to be the main financier of the band until his retirement from business, there was then a period of uncertainty for the band’s future until  Mr. J.T. Robinson, a local businessman arranged a meeting of the influential people of Haworth  at the Black Bull Inn to consider ways and means of securing the future of the band. A public subscription raised the considerable sum of over £200, and from this new instruments and uniforms were able to be purchased.... the minute book of the time states that ‘Bandsman Bancroft had to get his cloths altered to fit him’

From then on the Springhead Band became known as ‘The Haworth Public Brass Band’. The following picture, which is taken from a newspaper of 1888, which explains the poor quality, and shows the band with James Bancroft third from the left in the back row. 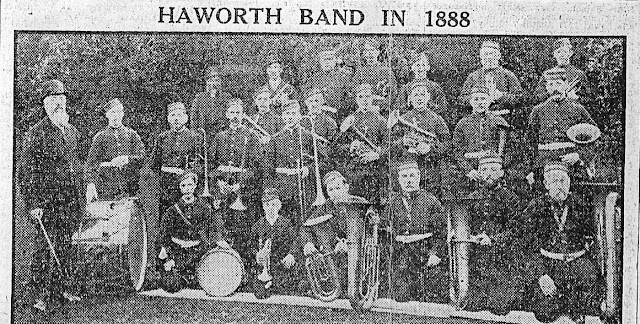 The band was involved in many concerts throughout the early years,as far away as Manchester, Morecambe and even Crystal Palace, and their winning cups were usually exhibited in local shop windows on the band's return. Nearer to home one performance was a concert at the annual local Gala. Here is an entry from a ledger of 1890, showing the receipts and expenses for this event…..by a stroke of luck, both work out the same…£21-15s 10p! 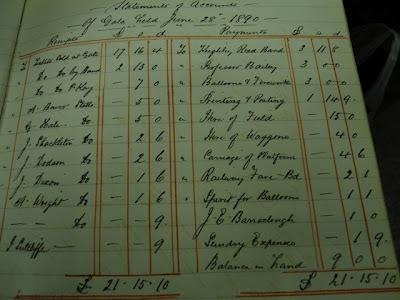 Trustees, including James Bancroft  were appointed and a Trust Deed was drawn up and signed on 2nd April 1895 which stated that ‘the band was formed with the object of promoting the knowledge and practice of instrumental music and affordable musical entertainment for the inhabitants of Haworth’. An interesting condition, which was incorporated into the agreement was that to qualify for membership of the band's committee, a person had to be a 'resident of the township of Haworth' 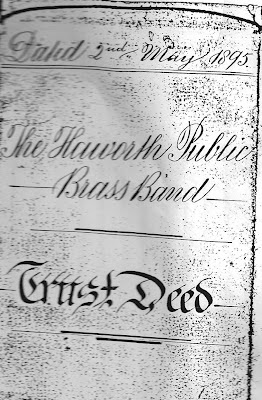 All trustees, including James Bancroft, were listed on the first page of the Deed. 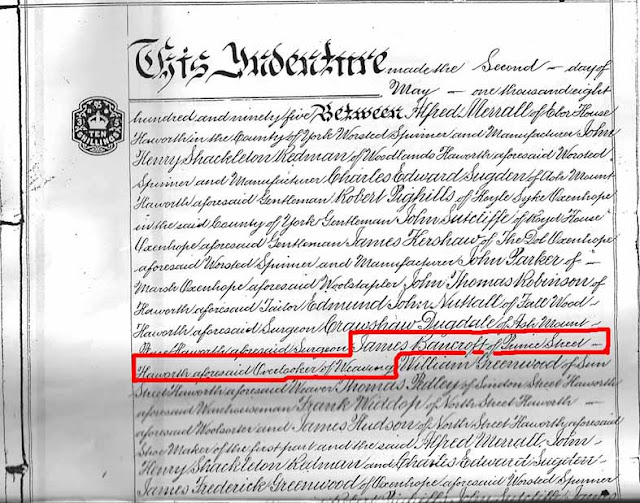 The items including  instruments,  which became part of the Band's property were listed in the Trust Deed as follows:
7 B Flat Cornets
2 E flat Cornets
4 E Flat Tenor horns
3 B Flat Euphoniums
1 B Flat Baritone
3 B Flat Trombones
1 Bass Trombone
2 E flat Bombardons
2 BB Flat bombardons
1 Bass Drum
1 Side Drum
plus 21 uniforms, including a like number of bells, overcoats and caps.

While writing this story I was reminded of an old article in the local paper.
Here are a few interesting paragraphs from the article:

“Mr Bancroft, better known as 'Jim o Abes', was one of the foremost bandsmen in the district , and was a cornet player in brass bands for over 40 years. When he retired in 1899 the public of Haworth presented him with a gold watch and chain in recognition of his 40 years service, and Mrs. Bancroft with a silver tea and coffee service”

And here is the extract from the Band’s minute book which mentions this:

Here is an amusing anecdote from the local newspaper, relating to the Band’s triumphant return from Crystal Palace in 1863 after performing in a competition:

“ The Haworth Band passed through stirring times under Mr. Bancroft’s control. One of the outstanding events was the visit to London to compete at the Crystal Palace in 1863. On their return to Haworth, stories were related which ‘capped the natives’ of that day. It was said that on this memorable occasion they arrived at the railway station at midnight and took of their shoes and stockings when they started to play through the town ‘so that they did not disturb the residents who had gone to bed!’ “

And another, interspersed with local dialect!

“Another amusing tale is told that one evening the band was rehearsing when a late comer, who had been listening outside, opened the door and exclaimed ‘My word you’re playing sahnds [sic] lovely’. The band put down their instruments and went outside to listen!”

“Haworth Band at that time prided itself on its ‘blowing’ powers. It revelled in the achievement of playing from the railway station to the top of Haworth without a break, and the band was prepared to challenge all-comers on the amount of music put out per mile. A challenge which was never accepted. The shirkers of those days never wanted to hear for a second time, the withering scorn which Jim O’Abes put into his query…”What’s ta' want to stop for?”

Looking through the minutes book, there are countless numbers of entries mentioning James Bancroft….here are just a few:

22nd August 1890….A motion was proposed by Mr Bancroft that a joint committee be formed of Haworth Public Brass Band and the public, for the management of the said band.

21st March 1894…. It was resolved that Mr. Bancroft wait upon Mr.P Bower respecting engagement as conductor at a certain terms. Expenses allowed to Me Bancroft

14th September 1898….It was proposed that Gilbert Bancroft be allowed to join the young band….carried [This was James’s son, who later emigrated to the US in 1905]

I will finish the story of James Bancroft and the Haworth Band with this touching, and rather sentimental Edwardian poem which was written about the band by a Mr. Mark R Peacock, many years ago, and is a charming recollection of times gone past.


The Haworth Band continues to thrive to this day, and regularly makes public performances.

For more information about the Band, please see their website on:
http://www.thehaworthband.co.uk
Email ThisBlogThis!Share to TwitterShare to FacebookShare to Pinterest

Hi Aussiegirl,
I do have more information about James Bancroft's line, including details of others researching the same line.
E-mail me for further information, if you are interested on:
jbancroft1@btinternet.com
Regards
Jar