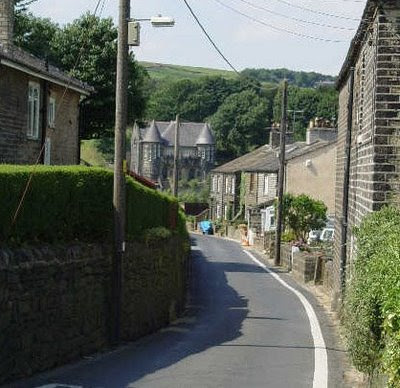 I am grateful to Tim Bancroft from Canada, who supplied me with details of this terribly sad story of his Great-Grandmother Sarah Bancroft, who drowned herself and her baby daughter at Boulderclough near Sowerby, Halifax in 1894.
At the time, Boulderclough was a sleepy little hamlet where not much ever seemed to happen until 19th June 1894, when Sarah Bancroft, the wife of Wright Bancroft, went out in the middle of the night with her fourteen month old child in her arms, and firstly drown the child before drowning herself in a nearby stream.
Here is how the local newspapers reported the tragic events as they unfolded, and the Coroner’s eventual verdict as to why this happened.

Sarah’s husband, Wright Bancroft was a well-respected man who was employed as a cloth miller at a nearby mill at Luddenden Foot, and was also a teacher and chapel-keeper at nearby Bethel New Connection Chapel. His job required him to work during the night, and he tended to return home between five and six o’clock in the mornings. Sarah had been complaining for about six months of acute abdominal pains, and had been spending long periods in bed. The couple had two children, Joe age 7 years and Alice Elizabeth who was about 14 months old at the time.

A niece, Miss Betsy Pickles, had been staying with the family to help Sarah with the house and children, and was woken in the middle of the night by some movement. She found Sarah sitting on the side of the bed putting her stocking on, and when she enquired if she wanted anything, was told “no, stay where you are” so went back to sleep and was then woken by Mr Bancroft at about six o’clock on his return from work, after finding both his wife and the baby missing, and the front door ajar.

Mr Bancroft went back outside on to the street and gathered some of the neighbours to look for his wife and child. Within ten minutes the bodies of mother and child were found in a shallow stream less than sixty yards from the house. The newspaper reported the finding as follows

The mother lay on her back with her face upstream, and a miniature waterfall of clear water was trickling down upon her face. She lay in her nightdress and the only other articles of clothing she had on were stockings and a petticoat. The little baby was to her left side, also having her head upstream…the child’s head barely reached the mother’s hands. The distressed husband waited for nothing, but lifted his wife out of the water exclaiming the while “ Eh Sarah, whatever have you done this for?” He burst into a flood of tears as he knelt on the rivulet bank and gazed into his wife’s pale face. The baby was taken from the water by someone else. The corpses were removed to the house and laid out side by side in the chamber they had recently left. As the morning sun stole in at the windows, the little baby’s face was a picture. Never in life had she exhibited much colour but now her cheeks were a pretty scarlet. The mother, as white as a sheet, lay on the left side of the infant.

An Inquest was opened two days later at the nearby Kings Arms Inn, and evidence was heard firstly by the family doctor who confirmed that he had visited Sarah seven times in the last week He felt that she had had delusions about her ailment, and he had tried to persuade her that she was mistaken, but that she remained in low spirits, although he did not think she had any suicidal tendencies.
Wright Bancroft was then interview, and in a distress state gave his evidence about the events of day in question. He left home to go to work at 5 o’clock in the evening, as usual, and that day his wife had stayed in bed all day. He went on to say that his wife had been seeing the doctor since 1st July, and that he had told him that his wife was suffering from an ulcer, but had been told that there would be no operation because of his wife’s nerves, due to the strong pain she was suffering. He said she did not seem low-spirited, but she never was of a very cheerful disposition. He confirmed to the jury that he and his wife “had lived affectionately together all their married life…and that she was a very good woman”
There was then evidence given by the niece Betsy Pickles, and various neighbours who commented on Sarah’s state of health, and how weak she was. One witness commented on the fact that she was so weak, she could hardly lift the baby up, and the fact that she was able to carry it to the stream surprised her.
The Coroner in summing up said that ‘all the evidence tended to show that the poor woman, distracted with pain, had drowned herself, and as to the baby, he was afraid the evidence was very strong that she drowned it as well….The case was a very unfortunate one, and he hoped it would be a long time before there was another like it in the township. From the way he gave his evidence, the husband seemed a quiet and respectable man, and he said he and his wife had always lived very affectionately. Besides he said, she was a very good woman’.

The jury deliberated a few minutes in private, and then found that Mrs Bancroft had committed suicide while temporarily insane, and that she had also drowned the child.
These facts regarding Sarah’s death are confirmed on her death certificate, shown below. 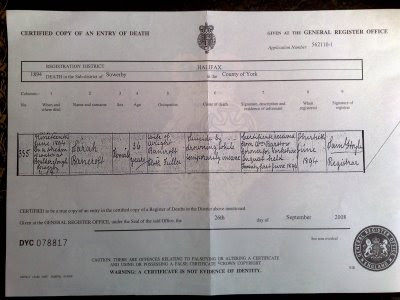 The local weekend paper for Saturday 23rd June 1894, summed up the whole incident as follows:

The Sad Affair at Sowerby
There will be but one feeling, that of profound sympathy, with the poor fellow at Sowerby who this week lost his wife and infant daughter in such a tragic manner. Boulderclough is so peaceful and quiet a village, it’s life is so regular and monotonous that the sad event of Tuesday must have produced a terrible shock in every home. The complaint from which Mrs Bancroft was suffering, an internal abscess, may well have occasioned in her a feeling of despondency, and now after her death, circumstances are called to mind which, though little regard at the time, seem to have indicated that her condition was producing a mental effect which is very familiar to coroners and juries. The fact that her husband was away at work during the night may indeed have accentuated her feelings of despondency, though the arrival of her niece on Monday to spend a few days with her might have been expected to have a cheering effect. Very sad indeed is the story of the finding of the poor woman and her cherub babe. The shock, so unexpected, was terrible to the stricken husband upon who’s happy home had come a sudden and crushing blow of a kind happily rare in human experience

After Sarah’s, death their surviving son Joe, was brought up by two maiden aunts. Joe’s first-born child, born 1910, was named Alice presumably in memory of his long lost sister.


I have never found anything to lead me to believe that Wright remarried after this sad incident. He died on 19th July 1913, and is buried with Sarah at the chapel near their home, where he had been at one time the Chapel Keeper.
Below is a picture of the Bethel New Connection Chapel and the gravestone of Wright & Sarah Bancroft. 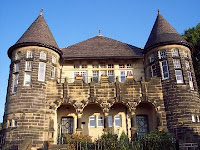 Thanks for this story, which was really sad but interesting.

I lived very near here as a child and was in concerts at the chapel. And played in the stream. So sad to hear this story...

I never new this! I grew up in Boudlerclough, I’m a Cockroft

I lived on finkle st just below boulder Clough and attended the chapel in boulder Clough I never knew of this story what a tragedy for that poor family my name is Geoff Wadsworth .I left the area in 1962 but go back very regular I still regard it as home

We visit Boulderclough often and last time managed to clear the weeds from the grave stone. Will do so next visit after xmas and post a picture RIP, regards John

John,
Thanks.
email any photos to my email: