I was recently driving past the site of what was once the Horkinstone Baptist Chapel, which was on the outskirts of Oxenhope. All that remains today is the graveyard, where quite a few Bancrofts were buried, including some of my family line, together with my Great-Great-Grandparents William and Hannah Greenwood.

There are at least six separate Bancroft graves on the site, all of families who lived in the Bradshaw Head and Far Oxenhope area, including Jonas & Betty Bancroft and their family, who lived in the Tancy End and Sykes areas of Far Oxenhope. Jonas occupation was a quarryman, an occupation sometimes also referred to as a ‘stone delver’ Another grave denotes what must have been a sad story of the death of four of the children of John and Harriet Bancroft, which shows their children dying at the ages of 7 months, 15 months, 19 years and then an unnamed stillborn child. John and his family lived in the Leeming area of Far Oxenhope, and carried on the business of a Greengrocer there. Thankfully at least three of their children reached adulthood.
My own Great-Grandparents Timmy & Jane Bancroft also have a grave there denoting the death of their firstborn child Fred, who died as an infant in 1871. At the time they were tenant farmers, living at nearby Dole Farm, Bradshaw Head. 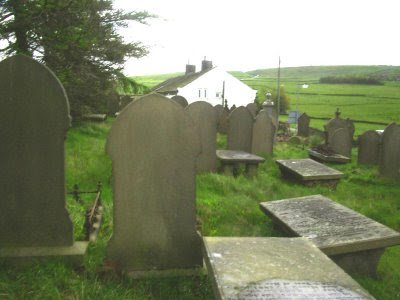 As the photos show, the Chapel is no longer there, it having been abandoned in 1924 when it was declared unsafe and then demolished. All that remains is the graveyard, which continued to be used after the demolition of the Chapel, with the last burial there recorded in 1953.The site for a new Chapel further down the road was acquired in 1925, and that was opened in 1927. This replacement building is still there today, although it ceased to be a place of worship in 1996 and has since been converted to residential use. 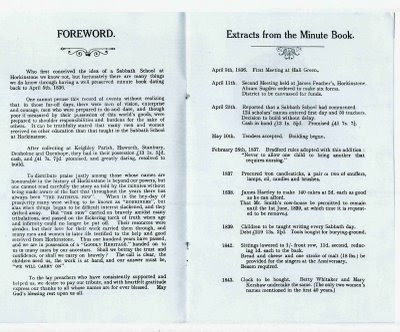 Extracts from the Souvenir of Centenary Celebrations of 1936 and the old minutes book for the Chapel, can be read by clicking on the photo, and they give some interesting facts about it’s inception and the early days of the Chapel when it was getting established. They provide a record of the first meetings in 1836 when it was resolved “with great daring” to build a chapel from the funds available which were £13 in cash with a promise of a further £41 after collection in all the outlying areas There are also interesting items about everyday things, such as "precuring iron candle sticks, a pair or two of snuffers, lamps, oil, candles and brushes”,and also “asking Mr Smith to remove his cow-house” by a certain date.

As was the practice of many chapels in those days, Horkinstone provided an annual Christmas Day Tea. The local paper at the time in December 1883 said, “ The Christmas entertainment was a great success. About 300 sat down to an excellent tea. After tea Mr W Kershaw took the chair when an excellent programme of glees, duets, readings and songs together with piano duets by Mrs Crabtree and Mrs Kershaw. Mr L Crabtree presided at the piano”.

The choirmaster from 1896 to 1907 was Amos Dewhirst, and in his time there the choir occupied a wider sphere than just it’s Sunday services. Under his leadership it formed the centre of the local social life. Public teas and Saturday-night concerts were important social events, and the choir alternated sacred oratorios such as ‘From Storm to Calm’ and ‘From the manger to the cross’, with comic songs like ‘The Chinese Laundry Man’ and ‘Ain’t Yer Ebber Gwine ter Marry Me?’
For some years the choir took part in the Great Nonconformist Festival in London, which required leaving Oxenhope on a Friday night and not getting back till early on the Sunday morning.

The graveyard is now managed by a group of trustees, and they are currently in the process of producing a book about the graveyard and it’s inhabitants. If you are interested in getting a copy of the book when it is available, please contact the trustees by clicking here
Email ThisBlogThis!Share to TwitterShare to FacebookShare to Pinterest