The village of Haworth is no stranger to ghosts, and here is a nice little story sent to me by fellow Bancroft researchers, Charles and Joan Jessop....see what you think!

"On a visit to Haworth in July 2010 our intention being to clean and tidy my wife's family grave, a grave we had found previously. We made our way past the Church up through the graveyard to the grave .First we moved hens and cats, then cleaned bird droppings off the stone. The grave is just earth and we could only weed it .We then decided to get some flowers, not realising Haworth is closed on Wednesday afternoon.We walked down the high street then down through the park, where Joan never fails to recount summer holidays spent visiting Grandmas. We found two plants at the greengrocers and made our way back to the graveyard.While  I planted the flowers, pink for the ladies and white for the gentlemen, I made comments on why they had not left any inheritance to my wife's side of the family

On returning home that evening I decided to take a bath and while lying ,eyes closed relaxing, I opened my eyes to see in steam and condensation an image in the mirror. Having puzzled over it for several minutes I decided the Bancrofts had come to say thanks. I shouted to my wife and then took this photograph. 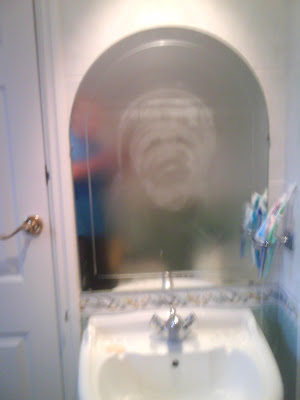 We cleaned the mirror several times but the image returned every night for several weeks until I guess the flowers died for it no longer appears, then I read on your web site of bodies buried in wool  and the image seems stranger than ever. [click here to read the buried in wool story]
I will not make sarcastic remarks in Haworth graveyard again!"

The family grave they were researching contains Joan's ancestors Abraham Bancroft [1801-1881] and his wife Margaret Hartley 1840-1876] who were tenant farmers at a place called "Hole" near Haworth.
Also in the grave are their son Hartley Bancroft [1852-1922] and his wife Rebecca Robinson [1849-1907] who carried on with living at the farm after Abraham died, although his occupution on the various census records list him as a Stone Quarry Owner, rather than a Farmer. 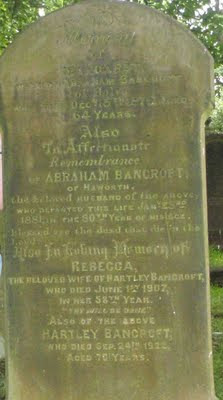 I wrote an article some time ago about a different ghost in Haworth Station, which can be read by clicking here.

My very own introduction
Hiya, my friend just informed me relating to this forums therefore I believed i would definitely arrive and consider a appear and also present myself, Seems an excellent web site having a a lot of extra people!