Pictures from the old Salt Tin


There's an old saying " You don't  know who you are, if you don't know where you come from!", and I am often asked about how I became interested in researching my family line, so I though I should put something on the blog about this..... this is how it all started.

After the death of my Grandmother, Hettie Bancroft in 1982, the family were going through the many things she had collected over her long life of 90 years, and came across a wonderful collecting of old family photographs, in a large old salt tin. She had obviously cherished this collection throughout her life. Much to everyone’s surprise, no one in the family had ever seen the salt tin before, and we therefore discovered that she had been an enthusiastic and prolific photographer of her family, her working life and surroundings in her earlier years.

The picture below shows a proud moment for the Bancroft Family.....Their first car!, which was a "Bull-Nosed Morris" and was only the second car to be owned in their village in Thornton. The first car in the village was actually bought by the local doctor. I also remember her saying how motoring could be a toil as well as a pleasure if they were out motoring at night. The rear lights had candles in the lamps and so  they had to check the reflection of the lights in passing shop windows, to make sure they had not blown out. There was also her memories of everyone having to get out an push it up steep hills  and then putting a brick under the back wheels, to stop the car running back when they all had to stop for breath half way up the hill!

Hettie, and my Grandfather John, had run the family farm, Nettle Hall, nr Thornton all their married life and had been typical hard working farmers for most of the time, but unusually for that type of background, they had always spent a couple of weeks every year holidaying in lively Blackpool, as a complete change to their normal quiet way of life. Here they are with the children, enjoying a day on the beach....my Grandfather John dressed in a suit with a collar and tie, which was most unusual for him!


The photograph collection contained lots of the normal holiday snaps, like this lovely one showing Hettie  and children paddling in the sea on a rather misty day at the seaside. 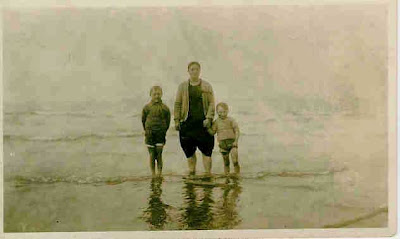 There were also lots of wonderful family photos of life on the farm in the 1920’s and 30’s, showing farm practices long since overtaken by progress ,such as tending to breeds of cattle no longer seen on modern farms, haymaking by hand with scythes and wooden rakes, and working the land with a team of horses. Here we see a couple of  them bringing the hay in, before the days of baling it, ready for storage for winter feed for the animals. The first one shows Hettie's parents, Lister & Jane Watson helping out at hay-time....notice the shiny toecaps of Lister's clogs, which everyone on the farm wore at that time and Jane's sun-bonnet which, I think, adds a certain period charm to the picture.

It must have been thirsty work...you can just make out Grandfather on top of the haystack drinking from a pop bottle. 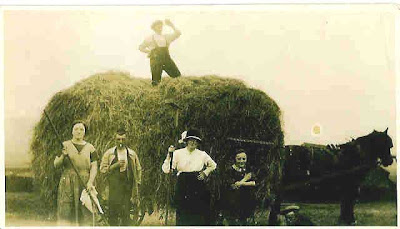 and also this beautiful picture of my Grandmother Hettie in later life, with the working horses on the farm in an age before tractors became the norm in farming practice. She once told me how sad she had been on the day the horses were taken off  the farm for ever. She could not bear to see them going, so stayed in the house when they were lead away.... praying that she would not hear them whinny...but of course they did make a noise when being loaded up and she then cried all afternoon. 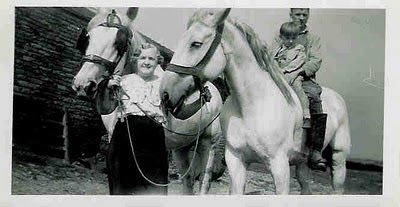 Amongst this collection of photos was a Memorial Card to commemorate the life of my Grandfather John’s father Timothy Bancroft, who died in 1900 and was buried at Mount Zion Baptist Chapel at Ovenden nr Halifax.. Up until then I had never really thought much about my ancestors because as a family this was something that we never really talked about much. The religious verse within the card is as follows:


"Farewell, dear wife and children all
Your face I see no more
Until we meet at God's right hand
On Canaan's happy shore" 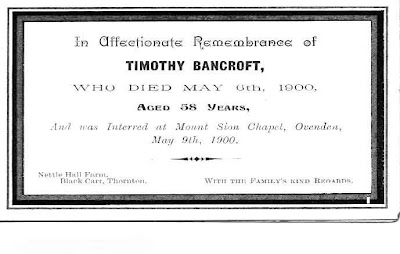 It was this one item, the memorial card, which started me on my quest for family history research, and from it’s details we were able to find the long forgotten family grave at Mount Zion Chapel, which was found after several searches in a very overgrown corner of a very neglected graveyard. I wrote and article about Mount Zion Chapel some time ago, which can be found by clicking here. 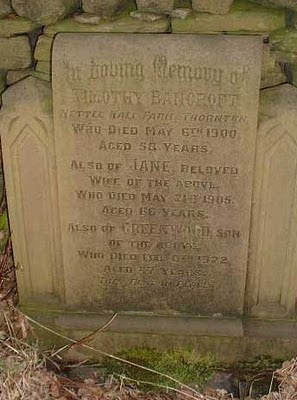 I just want to finish with, what for me, is the special photograph in the collection, showing my Grandparents in their younger days having a good time with their friends on a day out. [John & Hettie are third and fourth from the right...John is wearing a bowler hat for the occasion...very middle-class for a man who normally always wore a flat cap!]


They say that "every picture tells a story" and also "a picture tells a thousand words", and as well as the many family pictures in my Grandmother Hettie's collection which were easily identified, there were lots and lots where the individuals could not be identified because nothing was written on the back. She obviously knew who they all were but never passed it on to future generations, so all this wonderful material with all those stories about the people concerned will never be known....so here's a plea to all fellow researchers....please.... put some information on the back of all your photographs so that the information is not lost forever!

To read the full details of my family line click here