I visit Mount Zion Chapel at Ovenden on a annually basis to check an tidy up our family grave where my Great-Grandparents are buried, and was privileged some time ago to be given a guided tour of the building with a party of other interested researchers.
The original Chapel and adjoining cottage was opened in 1773, and was at that time in the Anglican Parish of Bradshaw.
One of its most important preachers came soon after it’s opening…John Wesley came and stayed in the adjoining cottage on 22nd April 1774. He recorded the following in his journal ‘I rode to Bradshaw House, standing alone in a dreary waste. But, although it was a cold and stormy day, the people flocked from all quarters. The house afforded hospitality and shelter for man and beast’. He made his last visit to preach at Mount Zion in May 1790, by which time he was a frail 87 year old and it was said that two friends had to assist him as his memory was failing.
It is said that a window in the Chapel Cottage once had the following etching…’Time how short – Eternity how long. CW’…Was this a reference to a Charles Wesley’s visit?

The original building was demolished and the present day chapel was opened in 1815. The only remains of the 1773 building are the sundial on the front of the present chapel and a foundation stone.
The interior of the Chapel was done by a company called Leeming & Leeming in 1881, a well-known firm who also did the interior of the Admiralty Building in London. The capacity of the building is 170 on the ground floor & 180 in the gallery on pews made of pine. The original pew rent board is on view in the vestry.

The Chapel also houses an important collection of Methodist Ceramics, bequeathed by Alderman Horace Hird, a one time Lord Mayor of Bradford. The collection consists of busts, standing figures, pulpits gothic niches, plates, plaques, teapots, jug cups and much more, mainly Staffordshire, but also some Wedgwood and Sunderland pieces. Many of the items are on permanent display in the Chapel, and the rest safely in storage. Two of the busts are of John & Charles Wesley.

There is also a collection of pictures, on display in the adjoining cottage, which depict life locally at the time of Wesley.

The Chapel Organ was built in 1892 By a Belgium company called Charles Anneessens, and is thought to number one of only six left in the world still in working order. The original Chapel Cash Book records the cost of the organ as £350, with an additional cost of £1.14s.0d to convey it. The original blower can still be seen, but theses days an electric blower is used. The organ is still working and was last overhauled in the 1980. It is however now in need of an enormous amount of money to carry out a full restoration, which is hard to justify in this day and age.

It is well worth going onto the Chapel’s excellent website for lots more information. The site also contains links to a register of monumental inscriptions and photographs of every grave known in the graveyard, which has been painstakingly produced by volunteers, together with a plan of the whole graveyard, which could be invaluable to any family history researchers. There are records of at least 50 Bancroft people buried at Mount Zion, many of them unrelated.
The site address is:
http://www.mountzionhalifax.org.uk/

The Chapel has it’s own Heritage Centre which is open to visits at certain times in the Summer. Full details on it’s website, and I would urge anyone with any interest in family history to go along and see everything on view at this important place of local religious history. 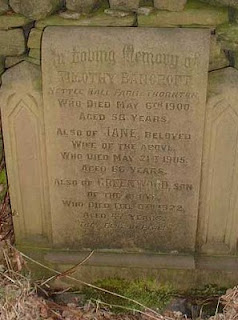