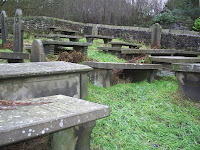 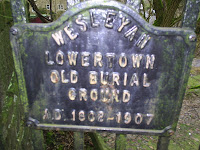 I was recently lent an interesting book about the Lowertown Old Burial Ground, which is in the village of Oxenhope near Keighley. Originally it adjoined the Wesleyan Chapel, which had been built in 1805, and these were the first church and graveyard in Oxenhope.

From records at that time, the chapel was obviously still in debt several years after being built and the trustees were desperately trying to get some money in. The Methodist Times of 1910 recalls early days at Lowertown Chapel…”When £300 debt remained on the early chapel, Mr Beaver’s father wore out a new pair of boots in tramping the surrounding district getting subscriptions. Have the younger generation realised this self-sacrifice?.”

The first burial took place in 1807 and thereafter they averaged about five burials a year, the last one was carried out in 1908. It was becoming evident by 1850 that more burial land was going to be required in the village and so a new Wesleyan burial ground was opened on land across the road, and the two were then used at the same time.The old burial ground was largely hidden from view for nearly two hundred years because it was partly behind the Chapel, which was in use until 1891, when a new larger Methodist chapel was built elsewhere in the village. It contains at least 90 graves all packed into a fairly small area, and was in a very neglected and overgrown state when it was rescued. There are though to be many other people buried there in unmarked graves. The old chapel was eventually sold and converted into a mill where it was in use for the next century under the name of Perseverance Mill, but in 1990 the mill was destroyed by fire. When it was demolished after the fire, the little burial ground was revealed for all to see from the roadside. The following year the site of the mill and burial ground were offered for sale as building land. Two local Bancroft sisters decided to put in a tender to buy the graveyard, because it contained the graves of some of their ancestors and were successful in purchasing it. They then managed to set up “The Lowertown Old Burial Ground Trust” with six trustees appointed, all of whom had ancestors buried there, and who were also interested in family and village history. The burial ground was thus saved for future generations.

The burial ground is on a steep slope, measuring about 90 feet x 60feet, and is bound on two sides by the original stonewalls. The gravestones are close together and are set in eleven rather haphazard rows without paths between them, which must have made funerals difficult in such cramped and steep conditions.
The gravestones are set northeast/southwest and are all inscribed, except for two, which face northeast. There are 101 gravestones commemorating 264 people. Twenty five of the gravestones are impressive table tombs, made from huge blocks of millstone grit measuring about 6 feet x 3 feet x 6 inches, weighing about half a ton and resting on shaped stone supports. At the lower end of the burial ground there are no memorial stones and it is thought that stillborn babies were buried here together with those who could not afford a plot for a family grave.

There are several Bancroft families buried here, all descended from Joseph Bancroft who died at Far Oxenhope in 1785,but who was buried at Haworth Church. The Bancrofts buried here in Oxenhope were either the mill owners or mill workers from the village.

One Bancroft family grave denotes a sad memorial to John Bancroft who died in 1869 age 56 and his wife Mary. John had been a spinning overlooker at the nearby Charles Mill, who had seven children during their twelve-year marriage, of which four died very young. Jonas died of the croup age 3: John of work fever age 1: George of teething, inflammation of the lungs and convulsions age 1. Their mother Mary died age 33 after a long illness of Phthisis pumonalis [tuberculosis]. Eleven years later their second child, Walker Bancroft was killed at the age of 21 years at Charles Mill where he worked as a engine tender. At the inquest in 1862 the cause of death was given as “accidentally crushed when working in a steam engine”. He had previously had an accident in the mill in which he lost his left hand. The father John died in 1869 and the cause of death was described as “chronic ulcer of stomach etc”. His remaining two sons Joseph and Jonas went on to eventually inherit Charles Mill from an uncle in 1870, and the Bancroft family continued to run the spinning mill for another hundred years.

Another grave marks the family of Joseph and Pricilla Bancroft who lived in the outlying area of Sawood. On the 1861 census Joseph is listed as a quarry master employing seven men at his flag and slate quarry. It is a sign of the hard times that children had to encounter in those days that his son David was described on the census as a “Coal Miner” at the age of eleven years, and died age 29years in 1879. Joseph later went on to be the innkeeper at the Dog & Gun Public House at nearby Bradshaw Head, as well as continuing with the quarry work, and he died in 1889.

Since 1991 there has been an ongoing programme of restoration and maintenance of the burial ground, with support from donations from all over the world, much of it from other researchers who have ancestors buried there.

[With acknowledgements to the book: “The Lowertown Old Burial Ground and Life in Oxenhope 1807-1908”, where most of this information came from.
If you would like to purchase a copy of the book, please contact the trustees by clicking here
Email ThisBlogThis!Share to TwitterShare to FacebookShare to Pinterest

Thanks for another interesting article.

I'm curious about the Denholme Methodist Old Graveyard - do you know if it still exists or whether the monuments have been photographed?