The day the heavy horses left the farm. 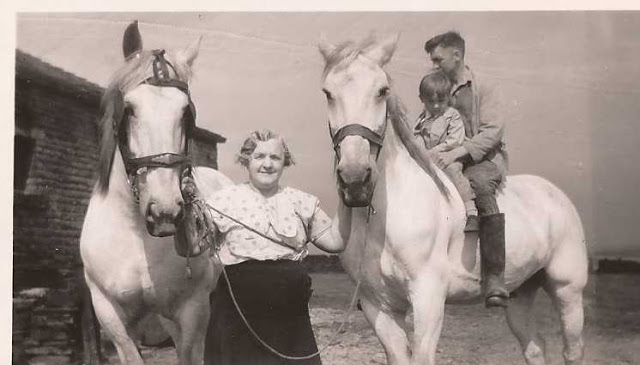 I was recently going through some old family photos taken by my Grandmother, Hettie Bancroft, over most of her life and the above photo brought back memories of a conversation I had with her many years ago.

Until the late 1950’s most work on the farm was done using heavy horses, and my grandparents, John and Hettie Bancroft who farmed at Nettle Hall Farm in Thornton, always had a couple of heavy horses for this work.

Shown here is Hettie standing proudly holding the last of their heavy horses. I can still remember her talking about then, and calling them fondly by name, Darling and Sweetheart!....great names for these large gentle creatures.

After the end of the Second World War, many farms moved away from using heavy horses on the land to using tractors, particularly with the arrival of the smaller and cheaper grey Ferguson models.
The fateful day came in the 1950’s when these beautiful animals were no longer needed due to the arrival of the first tractor on the farm, and as no one else wanted them, [you could not even give them away!],  the only solution was to take them to be put down at the local Knacker’s Yard.  Today they would have gone to a local horse sanctuary, but in those days there was just too many surplus large horses for this to be an option.

Hettie said she could not bear to see them being led away for slaughter, so stayed in the farmhouse all that day, hoping that they would not make any noise when being loaded into the wagon. Unfortunately one of them whinnied as it was loaded up, and she says she burst into tears and cried for a week afterwards!

She never forgot that day, and told me the story as a young child in the late 1950’s, which is something I’ll also never forget
Email ThisBlogThis!Share to TwitterShare to FacebookShare to Pinterest