The village of Cowling near Keighley was the home to many Bancroft families in the 18th & 19th century. Many were involved with the stone business and worked either in quarries in the area, or indeed actually owned small quarries on pieces of land they owned.


Three Bancroft brothers, Smith, Isaac and John were the sons of James and Esther Bancroft who lived on a 40 acre farm called Fairplace in Cowling and also ran a small stone business, probably quarrying stone from the land where they lived.

Later in the 19th century their business partner in the building firm became Holmes Gott.

Smith died in 1890 and Isaac died in January1900, but I'm unable to work out exactly when John died as there are several Bancroft deaths with the same name around this time.

The building partnership called "Bancroft & Gott" was set up by the two families because both families were involved in the stone business, and jointly constructed several important structures in the area, one of them being the Cowling Pinnacle

There was a former pinnacle structure in the area known as ‘ Cowling Pinnacle’, which is said to have been quite large, and was built as a 'Folly'  in 1815 by William Wainman of Carr Head Hall, possibly to commemorate the end of the Napoleonic Wars.

It was badly damaged by lightening in 1870 and was then rebuilt by Messrs Bancroft & Gott in 1898, with the work being paid for by a Mr Hall-Watt of Carr Head. This ‘new pinnacle’ as it was called for many years afterwards, was rebuilt on safer ground in nearby Sutton parish, with Mr Hall-Watt paying a small peppercorn ground rent to Sutton Parish Council.

The Pinnacle has always been a magnet for ramblers and people wanting a day out in the fresh air and looking for somewhere for a picnic, as this old photo shows. 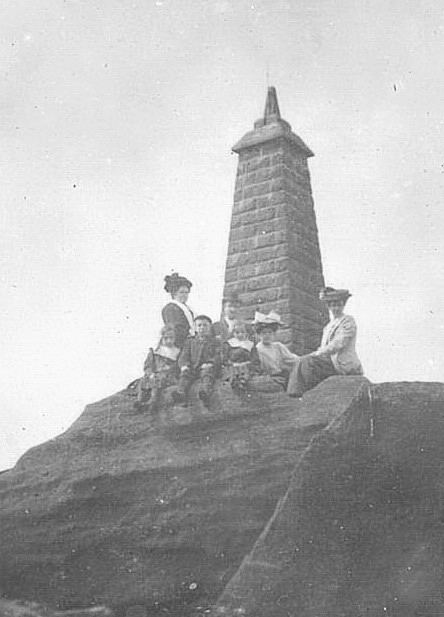