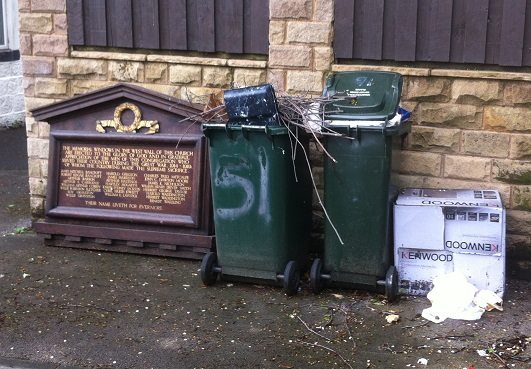 Here is the interesting story of a WW1 memorial plaque which had been presumed to be lost since the 1970’s but turned up recently, as part of a house clearance in Keighley, and was then nearly lost again.forever....thrown out with the rubbish!

The plaque had originally been on display in Temple Street Chapel Keighley, but when the Chapel closed in 1978, the plaque disappeared, and for many years was thought to be lost. Alongside the plaque in the Chapel were a pair of WW1 memorial stained glass windows, which are now on permanent display at Cliffe Castle Museum in Keighley, and which helped to confirm the identity of the plaque because of some similarity in the wording. 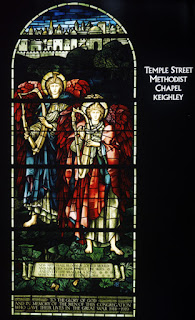 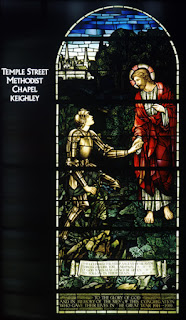 And that is how the mystery of the plaque's disappearance  was for many years until, as part of a house clearance, the it was found left outside a house on Chelsea Street, Keighley, alongside some wheelie bins and a pile of rubbish, and was saved in the nick of time before being collected with the rest of the house rubbish and lost forever. It can only be assumed that a thoughtful parishioner from the Chapel had taken the plaque home for safe keeping when the chapel closed in 1978, and it had been sat in their attic ever since.

Luckily a sharp-eyed member of the public noticed it as they were walking past the property and alerted the 'Men of Worth' project , who are a group of local volunteers who research and record details of local war heroes. After negotiation with the police to decide on ownership of the plaque, it was passed to the group and they have now donated  it to Cliffe Castle Museum, to sit alongside the Temple Street Chapel windows, already on display there.

On closer examination of the names on the plaque, the first two names refer to James Mitchell Bancroft and Robert Edgar Bancroft, who were brothers lost in WW1. They were the sons of James and Rose Bancroft, who had a total of eleven children, although two died at an early age.

WW1 must have been a worrying time for James [Senior] and the family with, at one point, four sons service in the war in France.

A few years before the start of WW1 the 1911 census shows James [senior], who by now was a widower, having lost his wife Rose  in 1904, living at 23 Aireworth Street, Keighley with seven of his nine living children. Included on the census are James Mitchell age 23 yrs and Robert Edgar age 17 years. At that time James [senior] describes himself as a ‘Broker Furniture’ and ran a second hand furniture shop in nearby Bridge Street, whilst his son James looks to have been working in a draper's shop, and son Robert was helping his father in his shop.

The family lived within a few hundred yards of Temple Street Chapel and seems to have had strong connections with it, as James [junior] is know to have been a teacher and secretary of the junior department, or Sunday School, and other family members also worshipped and were married at the chapel.

As far as the history of the chapel is concerned, briefly it was opened as a Wesleyan Methodist Chapel on 27th November 1846 with a capacity of seating 1,600 worshippers. It prospered for many years but it became increasingly difficult to continue, due to the cost of maintaining such a large building with a dwindling membership. Discussions were opened to set up  a shared agreement with the nearby Keighley Parish Church and  a sharing agreement was eventually signed, and the Chapel finally closed it's doors in 1978,

The final service at the Chapel was reported as follows in the Keighley News at the time.

The Temple Street Chapel premises were sold to the local Council for £36,000, with presumably anything of value removed, including the plaque and stained glass windows, and it eventually became a Muslim Mosque, which it continues to be to the present time.

Details of James and Robert's WW1 stories can be read here

[I am grateful to the Men of Worth project for help with this article . Their website is here]