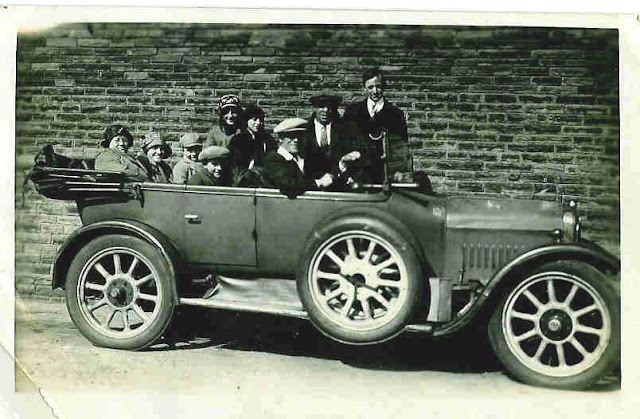 Here is a nice happy little story about a family holiday in the 1920's and the journey to get there.

Whilst going through some old family photos recently, I was reminded about the story of my Grandparents, John & Hettie Bancroft who were farmers near the village of Thornton near Bradford in Yorkshire, and their pride when acquiring their first motor car…a Bull Nosed Morris Oxford from the 1920’s. The above picture shows my Grandfather, John, standing proudly at the back on the car's running board, letting one of his friends sit behind the wheel, and my Grandmother, Hettie, second left in the rear seat.

Prior to getting their first car, like many local people, John and Hettie either had to use a horse and cart or the local buses to get anywhere, but when they got this car there was no holding them back! They normally lead a fairly quiet life running a mixed farm, but for a bit of excitement in the late 1920’s and 1930’s, like many other families liked to go to Blackpool, the most lively of all the northern sea side resorts.

The photograph at the top shows them all about to set off on their exciting journey to the coast…somewhat overloaded with 9 people in the car,  and below is a photo of the same party enjoying themselves on the front at Blackpool, all dressed up in their Sunday best. Note my grandfather in his suit together with watch-chain and wearing a bowler hat, not looking much like a farmer that day! 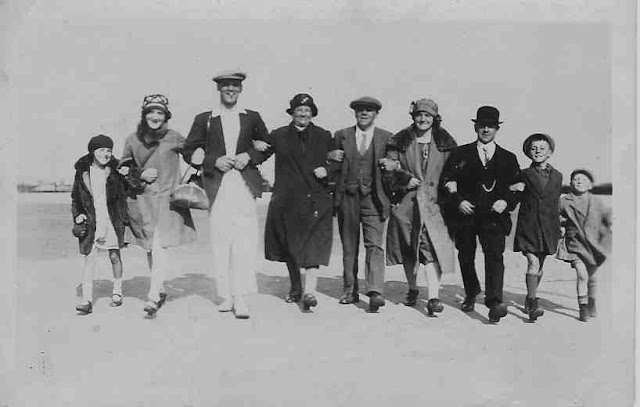 Their car, which was only the second one owned in the village was a Morris Oxford, and got its popular name, 'Bullnose', from its distinctive round-topped radiator, and was manufactured  between 1919-1926.
An early motoring review of the model in 'The Times' newspaper said: “The engine was reported to be "commendably flexible" and quiet. It seemed to enjoy being made to turn over at high speed and that happened easily, certainly it had plenty of "courage". The clutch was good. There is no safety stop for reverse but the gear box was pronounced the chief delight on the car, it is "simple, quiet and expeditious". The accelerator is very sensitive, and the brake handle was too far away. The car was easy to travel in and holds the road at any speed, and will reach 50 mph, with the same steadiness as cars of twice the weight and price.”

Motoring in those early days was not without it’s trials and tribulation, as I well remember my Grandmother saying that on journeys to the coast, the car had difficulty getting up some of the hills, and everyone except the driver had to get out and walk up the hill, to lighten the load….no doubt the fact that there were up to nine people travelling in the car had something to do with this!

They also had to keep a block of wood in the car to put under the back wheels if parking on a hill, otherwise it rolled back because the handbrake was not very good!

Another motoring task required by the passengers, was to look in shop windows as they passed them in the dark, because the rear lights worked by burning oil…my Grandfather’s  request was to look for the reflection in the windows, to make sure the lights had not blown out! 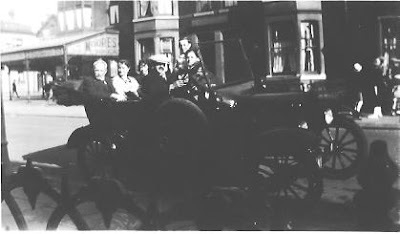 Blackpool in the 1930’s remained my Grandparent’s favourite holiday destination, and they returned there many times. This  picture shown is another visit to Blackpool, to their favourite Boarding House, with John behind the wheel and his in-laws, my Great Grandparents, Lister and Jane Watson, in the rear.

To finish the article, here is a nice picture showing my Grandparents with their three children, Gladys, Fred and my father Lister, on the beach at Blackpool, which does not seem that crowded at the time...possibly a bit cold as well, as they still have their coats on! 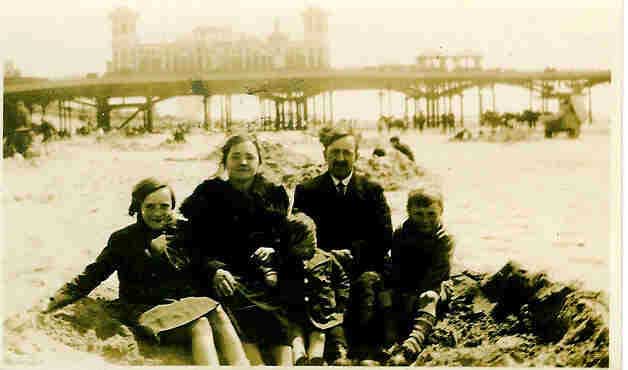