The Bancroft Delvers and Quarrymen

Not everyone will be familiar with the local job description of “Delver” which is another term for a stone quarry working, a job which employed many individuals in Yorkshire which had, and still has many sandstone quarries. This once important local industry shows on the 1850’s Ordnance Survey area dotted with many quarries , and the trade directory of that time lists 10 stone merchants and quarry owners in the Keighley area, with another 4 in Bingley, and the industry was booming at that time due to so many new woollen mills springing up in the area.

I was recently reading an article in the local newspaper about nearby Flappit Quarry, a large stone quarry which has been active until fairly recently for nearly 200 years, and which provided a living for many Bancroft families, including some of my ancestors….a living that was not without its dangers as the above picture shows with cranes, overhead gantries, horse and carts etc. everywhere. [More about Flappit Quarry as it is today later in this article]

As far back as the 1851 census, my G/G/ Grandfather, Timothy Bancroft, together with his three eldest sons, who were all still teenagers, were working as “Stone Getters” when they were living nearby on Cullingworth Moor as the following census record shows. A stone getter was not a skilled stone worker but was more likely to be just a general labourer, manhandling the stone and loading carts.

10 years later he had moved to New Spring House [now called Field Head Farm] and by the1861 census he had progressed to being a "Quarry Contractor employing 6 men".

The quarrymen worked with hand tools in this bleak open moorland with no safety equipment, using only hammers, picks, crow bars and sledge hammers forcing the stone from the rock face after removing the overburden of clay and soft rock  to expose the usable flat top surface of the bed. They would first mark out the extent of the block to be broken free, then rows of tapered holes would be cut along the marks and wedges hammered into the holes to split the rock, allowing the block to be prised free with crowbars, and then lifted out either by horse and man power, or in later periods by a crane. The block of sandstone, weighing several tons, could be then moved to the work area to be split again into manageable sizes and the masons could finally shape the sandstone to the correct measurements.  Even inclement weather would not stop them trying to earn a day’s work to feed their often large families. If the weather was bad, the only shelter available was usually in a dry stone shelter, built from all the smaller pieces of discarded stone that was usually strewn around the site.

Below is a picture showing the size of some of the sandstone blocks extracted from a local quarry.

Quarry working was however not an easy job for older or less fit men, and so Timothy eventually had to give up this work and took tenancies on various farms to earn a living as a farmer, which would have been less arduous and certainly less dangerous.

Another Bancroft was John, who was born 2nd September 1827, the son of William Bancroft and Hannah Bartle. At the time of his birth his father was listed as a ‘Husbandman’ living nearby in the Denholme area. A husbandman was a job description given at the time to a free tenant farmer or small landowner. The social status of a husbandman was below that of a yeoman farmer, who was generally the person who both owned and farmed the land. William and Hannah had a large family, of at least ten children, which probably explains why John seems to have spent his early years living with his grandparents, Joseph and Martha Bartle in a row of farm cottages called Providence Row on Cullingworth Moor, as his parents were probably short of space in their house with such a large family. The censuses of 1841 and 1851 show him living with them as a weaver and later a delver. He later went into business as a tanner and currier as the following letterhead shows. 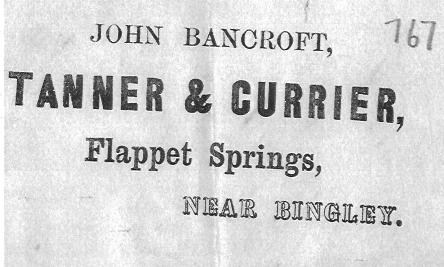 My Grandfather, John Bancroft b 1880, was also a Stone Quarry Worker is his early working life as the 1901 census shows.

Although born and raised on the family farm, Nettle Hall at Thornton, he did not take up full farming duties until a few years later after getting married.

Moving on to the present day, Flappit Quarry has been subject to much publicity in recent times, because although it was not been properly used for many years it became an unofficial off-road biking area, until the local authority stopped this after a fatal accident happened there.

The quarry has changed hands in recent years, and earlier this year two new applications, by Flappit Tipping and Recycling, were submitted to the local authority. One sought permission to extract the last remaining stone from the site. The other was to change the planning conditions, allowing the company to push back the full restoration of the land until 2038. Both applications have now been approved. This approval came despite Cullingworth Parish's objections  to the applications.  It is estimated that work to restore the site is likely to require around 2 million tonnes of "construction and demolition" waste being brought onto the site to fill the quarry.