Following on from the previous story about the finding of a long lost WW1 memorial plaque which can be read by clicking here, and to coincide with Remembrance Day, here is the story of the two Bancroft brothers, James and Robert, who were listed as the first two names on the plaque. 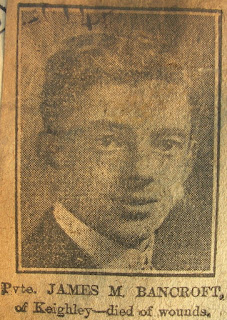 James Mitchell Bancroft was born in Keighley in 1888 and initially worked as at a drapers shop in the town, before working as a clerk in the Keighley Educational Offices. The local newspaper said he ‘had an unassuming disposition and was very popular with his colleagues and friends’. He was closely involved with the Temple Street Chapel Sunday School as a teacher and secretary there.

He signed up as a Private in the Duke of Wellington’s Regiment, and spent about 12 months serving on the front in France. At that time the family had three sons servicing on the front, and another working in munitions, after having served on the front for 12 months.

The circumstances of James’s death are outlined in the following War Diary, which states that the Regiment were camped on the Mory East Road and received heavy shelling to the A and D Companies with a list of deaths and injured. At the bottom of the page, dated 26th April 1917,  is says:
“ 267111 Pte JM Bancroft died in hospital of wounds received on April 18th”

This terrible news that the family must have been dreading, was in a message received by them on 27th April 1917, when the Army Chaplin wrote:
“ Your son was brought into the hospital a few days ago, badly wounded. I saw him twice and he seemed very cheerful, and spoke about his home and church etc. I thought he would recover, but yesterday he took a turn for the worst and passed away last night. Everything was done for his comfort, and I don’t think he suffered very much. I buried him today in the ……. military cemetery. Please accept my sincere sympathy. He had laid down his life for his friends. May you be comforted and strengthened through this awful trial.” [The exact location of the military cemetery was purposely left black presumably for security reasons.]

A second message from a Second-Lieutenant K Chapman, of the West Yorkshire Regiment, wrote to his father:
“ I wish to let you know that you have the deepest sympathy from myself and all your son’s comrades in your sad bereavement. His loss will be keenly felt be all, for he was always cheery and an excellent soldier. I personally felt it very much indeed, for I have known him all my life. It will perhaps comfort you to know that he will be laid to rest alongside others of his brave comrades, who died doing their duty.”

The following notices then appeared in the Keighley News, which sum up exactly what a desperate time it must have been for the family.

James was buried at the Achiet Le Grand Cemetery on 26th April 1917, and here is his grave, together with a view of the whole cemetery….James’s grave is on the front row. 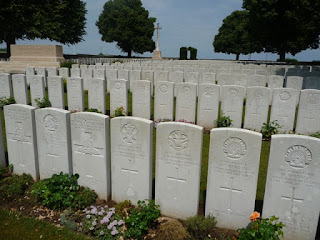 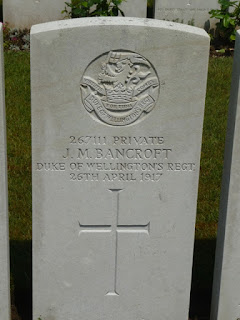 
Robert Edgar Bancroft’s story is a bit more of a mystery, because nothing of the circumstances of his death seems to have been reported in the local media, and no picture of him seem to exist.

We know he was born in 1893 in Keighley and prior to joining up was an assistant to his father, James, in his second hand furniture shop in the town.

Records show that he initially signed up at Halifax in the Duke of Wellington’s Regiment on 10th December 1915 at the age of 22yrs 4 months as a reservist, and was mobalised on 20th October 1916. Strangely, although he signed up in the Duke of Wellington’s Regiment his posting was with the Highland Light Infantry, with his army number stayed the same as 42142.

He obviously must have had some home leave because he married Carrie Goodwin at St Mary’s  Church, Keighley on 9th January 1917, shortly before he was posted abroad to France on 26th February. Their first and only child, Ethel Rose, appeared very shortly afterwards on 7th June 1917.

The circumstances of Robert’s war details are somewhat sketchy, but it seems that he was then reported ‘missing’ on 25th March 1918 on the Somme battlefields, near the French village of Maricourt, where the Highland Light Infantry's 12th Division were involved in prolonged heavy fighting. The war diary for that day show no mention of Robert by name, but during that week they reported 33 killed, 183 wounded and 110 missing so it is not surprising that he is not named in the records at the time, due to the heavy casualties.

Robert being reported as 'missing', must have left his wife Carrie and baby daughter in difficult circumstances, because the following  desperately sad document shows her applying for a pension to support herself and her child on the 18th November of that year, seven months after him being declared 'missing'....presumably the delay in her being able to claim a widow's pension was due to the fact that he was in initially declared 'missing' rather than 'dead'.

There is no grave of resting place for Robert, presumably because his body was never recovered from the conflict, but he is mentioned on the inscriptions at the Pozieres Monument, where 97 panels are inscribed with the 14,655 names of the missing casualties. These panels are incorporated in the southern, western and northern boundary walls surrounding Pozières British Cemetery.