The Bancroft Brush Makers of Halifax

There was a Bancroft family of three brothers, who were involved in Brush Manufacture in Halifax, West Yorkshire, during the 19th century, which at one point must have been a sizable business.

Frederick Bancroft seems to have started the business, and was born at Highroad Well in Halifax  in 27th November 1843,  the son of John Bancroft [1806-1858] and Mary Lees.His father  John had started his working life as a weaver, later becoming a ‘Victuallar’ and probably the licensee of the Queens Hotel in Halifax between 1845-1850.

Their son, Frederick, married Emma Morris in 1874 at Halifax, and they went on to have eight children, five sons and three daughters.


Frederick served his apprenticeship as a  brushmaker under a man called Mr. Sutcliffe, and the Brushmaker’s Society have a record of this dated 1865. As with all crafts at the time, the training of apprentices was given great importance and seven years was served in learning the trade. The Brushmaker’s Society took interest in the well-being of these apprentices and controlled the amount of apprentices a Master could take on. The apprentices looked on membership of the Society as a goal to be striven for. The lads finished their apprenticeship at twelve noon exactly with much noisy celebration. That afternoon, or the next Saturday a great deal of "health drinking" went on. They received their indenture which showed they had served their master. Later they were taken to a more solemn evening ceremony at a local Tavern which served as a meeting house for the local  branch. If the apprentice was of the required standard he would pay his entry fee to the society and be given his certificate.


The Brushmaker’s Society is an ancient organisation which came about because Brushmakers were always very aware of how precarious their job could be, as many of the earlier ones were basically journeymen, who moved from one brushmaking establishment, called a ' Panshop' to another, and could easily be out of work.  A means was needed to ensure that the members of the trade did not suffer due to illness, unemployment and old age, so, in 1747 (or probably earlier), the Brushmakers Society was formed. The Society was in effect a Trade Union but could not be called such as to do so would then have been illegal. Dues were paid weekly by all working members, and were held by the local Branch for distribution as agreed by the members. The term 'Journeyman' is taken from the French word 'journee' which referred to the way they were paid, rather than the fact that they travelled around looking for work. Journeymen tended to be paid by the day, whereas Brushmakers were paid by the piece, and it was considered a serious misdemeanour for a Brushmaker to leave an employer with unfinished work, which would then have to be finished off by someone else.

Around 1866 Frederick commenced business on his own as a brushmaker at Bull Close Lane in Halifax, where he soon went into partnership with a Frederick Fawthrop. The business went through several changes of address from Ann Street, to Stannary Street and ultimately to Raglan Street, which was a sizable factory as the following drawing shows, and was known as 'The Halifax Brush Works'

In 1869 the Brushmaker’s Society  records 'Messrs Bancroft and Fawthorp' as an employer. This meant they had their own workshop and were probably taking on transient journeymen to make up the customary teams of four that each brush shop used. They also had an apprentice, Charles Hanson, who would have been used as the fourth man as his experience grew. As firms prospered, more men would be taken on for different processes, with specialisation for each process becoming more common.


Brushmaking  methods were unchanged until the early 20th century. The brushmaker's "shop," consisted of four panhands who worked around a panframe. This was a strong table with a central hole in which stood a charcoal stove. On this stood a pan of hot, but never boiling pitch. The stocks of the brushes and brooms were drilled to receive their bristles on a hand lathe worked by treadle. Every hole had to be hand-drilled at a slightly different angle. The stock was then held on the panframe and the bristles in use were held on a drawboard. The panhand then drew a bundle of bristles and parted them to prevent their natural curvature allowing them to bend too much in one direction. The root end was dipped in the pitch and tied with twine. The knot, as the bundle was known, was then dipped again and inserted in the stock. The knot had to be correctly positioned in that split second whilst the pitch was still warm. A good broom would have ninety knots and each had to be inserted with the panhand keeping the natural bend of the bristles running the right way at each different part of the broom head. This was known as 'getting the bend'. When a good brushmaker had finished a broom the pile of the bristles would have a feel like velvet. For most of the l9th century the rate of pay for 20 knots was Fourpence-halfpenny per "good" broom. There were twelve sizes of broom down to the poorest quality, which would only have thirty six knots. These were not a popular item with the craftsmen!


Frederick, by 1871 was now describing himself as a ‘Brush Manufacturer employing 3 men, 3 boys and 7 girls’ and the business must have obviously flourished because 10 years later in the 1881 census, he was now listed as employing 23 men, 7 boys and 19 women.

When Frederick's partner, Mr. Forthrop, died in 1884, he then  took his brother, William Henry, on as a partner and this partnership continued until 1891, when William Henry died.

Their other brother George, was also involved in the same business, because his occupation on the 1881 census was listed as a ‘Commercial Traveller in Brushes’. In fact it may have been George who was responsible for starting his brother Frederick in the business in the first place, because as early as  1851, George is listed in the Brushmaker’s Society records as a 'Brushmaker’s Apprentice' to a  Mr Shellsher in Halifax, who was originally from Walworth in London, and who was listed as a 'Master Brushmaker' employing 3 men and an apprentice. George may have later become what the Brushmakers Society describe as 'a journeyman', which was basically a man who, having acquired the skills of brushmaking through an apprenticeship, would then just travelled around from town to town, living an itinerant existence, looking for work with any local brushmaker. My theory, although I have no hard evidence to support this, is that his wife, Emily Ann, was born in Minehead, Somerset, and his daughter, also called Emily, was born in Ireland, which suggests that George travelled about quite a lot. 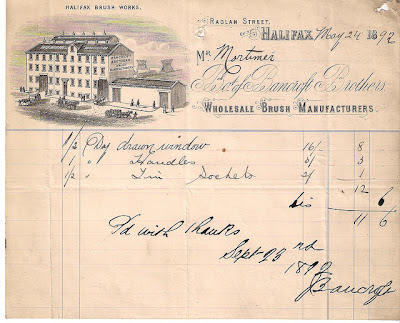 Shown above is a nice, well preserved invoice from the Brushworks dated 1892. The signature of  'J Bancroft' is probably John, son of William Henry Bancroft, who was born in 1864 and on the 1891 census was listed as a brush maker living ar Raglan Street.
After advice from the Brushmakers Society, it would seem that the items were:
1- Half dozen  drawn window brushes, the type where the bristles were held in place by wire rather than glued.
2-One dozen handles...probably broom handles.
3-Half a dozen tin sockets....probably the metal sockets that screwed into the wooden broom heads for the handles to slot into.
An interesting fact , which is sometimes forgotten, is that in those pre decimal days, lots of things were sold by the dozen, making it much easier to calculate the price!....Twelve times fourpence halfpenny = 4/6...if you see what I mean!


Frederick must have become quite prosperous from the brushmaking business, because he had been able to  moved a few miles out of Halifax and purchase a house called ‘Newlands’, which was a large residence surrounded by countryside in the nearby village of Warley. He died in 1895 at a relatively young age of 53 years, after only recently having been elected a local Councillor. It was reported that he had been  suffered indifferent health for some considerable time, and being confined to the house with dropsy for the previous two months. His son George William, who was by then the Brushworks Manager, was granted probate in his will of 1895.

The local newspaper, when announcing his death, wrote a long obituary, and said the following about him:
“As an employee of labour, Councillor Bancroft maintained the best relationship with his work people, amongst whom he was exceedingly popular. He was of a kindly disposition, and in the west portion of the town especially he had a host of friends. In politics he was a staunch Liberal. Up to October 1894 he had little interest in public affairs. He was then however prevailed upon to stand as a candidate for municipal honours in the West Ward, and was elected on the 1st November after a contest. Mr Bancroft’s ill health unfortunately prevented him giving that attention to Corporation affairs that he had desired. He was 53 years of age, and leaves a widow, four sons and three daughters to mourn his loss. The wide sympathy felt for the relatives of the late Councillor Bancroft in their bereavement was manifested in a marked manner on Wednesday at the internment, the attendance being remarkable considering the violent character of the weather.”

Shown below is a photo taken of Frederick's family in mourning dress, shortly after his death with his wife Emma, in the middle of the front row, surrounded by her seven children. 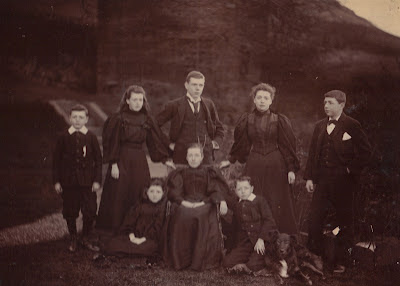 However things started to go downhill with the brushmaking business after Frederick’s death, because within a few years, the firm had gone bankrupt, due to stiff competition from German brush manufacturers, if family folk-lore is to be believed. Other reasons for the demise of their business could have been because of a problem with supplies of bristles, which had been traditionally imported from Eastern Europe and Russia, or if  the Bancrofts were specialising in a particular product, they may have been unable to adapt to changing demands, as the main problem for many traditional brushmakers was that they could not afford the  new more efficient machines, that could produce hundreds of brushes in a day.

The demise of the business  led Frederick's son, George William, to seek a new life in abroad, and so he emigrated to Saskatchewan, Canada in 1899. He lived there alone for four years, initially working in a lumber camp at Moose Mountain Park  before being joined out there by his future wife Lucy Wormald, who also grew up in Halifax. She came to Canada in 1903, and they were married in Winnipeg, before homesteading in southeast Saskatchewan and then living in Regina from 1913, where they brought up their family.


Frederick's widow, Emma, died on 3rd February 1918, and although still residing at 'Newlands', died at 14 Hyde Park, Halifax. She was 65 years of age. Both Emma and Frederick were buried at Christ Church, Mount Pellon, Halifax.

I am grateful to the following people for their help in producing this article:
Mike Bancroft from Canada, a descendant of Frederick
Steve Pick from Texas, USA
Malcolm Bull and his Calderdale Companion site:
http://freepages.history.rootsweb.ancestry.com/~calderdalecompanion/b.html
Ken Doughty and his Society of Brushmakers site:
http://www.brushmakers.com/index.html
Email ThisBlogThis!Share to TwitterShare to FacebookShare to Pinterest

Sandra,
The easiest way to keep up to date with new articles on this blog is to put your e mail address in the box headed "Follow by e mail" in the top right hand corner of the page.
Best Wishes
Jar