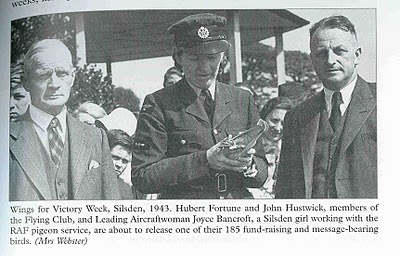 I recently can across this picture in a local history book, which shows Joyce Bancroft taking part in the "Wings for Victory Week" in Silsden nr Keighley in 1943. Joyce was born in 1917 in Silsden, the daughter of Sam Bancroft and Nora Crossley. Sadly her father Sam, was killed shortly after her birth in the  First World War and she was brought up by Nora and her Grandparents. I wrote an article some time ago about Sam's time in the war and the circumstances surrounding his death, which can be read by clicking here.
As is explained, Joyce was working in the RAF Pigeon Service in World War Two which got me thinking ...... I never realised that we were still using carrier pigeons in World War Two !

Joyce's Grandfather, John Henry Bancroft, who died in 1931, was formally a partner of a company called Smith and Bancroft of Cowling  a well known firm, in the world of pigeon fanciers, and was reported in the local newspaper as" having exhibiting with much success all over the country". He was president of the Silsden and District Flying Club,[the group of local pigeon fanciers], and had been engaged in the sport up until a week before his death.


﻿﻿﻿
During World War II, the United Kingdom used about 250,000 carrier pigeons for sending messages. The Dickin Medal, which is the highest possible animal's decoration for valour was only awarded  a total of 53 times during the whole period of World War II,and pigeons were given this award on 32 of these occasions, which gives a clue to the importance of the use of pigeons for message carrying at that time.

"Wings For Victory" Week took place between 15th-22nd May 1943 and was a fund raising scheme to encourage civilians to save their money in Government accounts, such as War Bonds, Savings Bonds, Defence Bonds and Savings Certificates. Cash would be paid into Post Offices or Banks. In much the same way as War Weapons Week, it would coincide with a week of parades, exhibitions and other war paraphernalia. The Keighley area, including all the outlying villages such as Silsden, where Joyce Bancroft lived,  were set a target to raise £750,000, which was the cost of ten Lancaster Bombers and seventy-five Spitfires planes. Silsden's efforts to raise money included the use of messenger pigeons which created a revival of interest in the Silsden and District Flying Club, and required all it's members to hold permits to keep homing pigeons under defence regulations. Purchasers of Saving Certificates were allowed to send greetings to local friends by 'pigeon post'. Some 185 birds, bearing messages on their legs secured by a small rubber ring, were dispatched from the local playing fields, and when the birds returned to their lofts the messages were then delivered by hand. This may have seemed a slightly pointless exercise by today's standards, but it did help to arouse interest in the fund raising and Silsden were able to provide funds for the war effort of £160,664...a very fine sum from a small village.
﻿
﻿

The UK maintained the Air Ministry Pigeon Section in World War II and for a while thereafter. A Pigeon Policy Committee made decisions about the uses of pigeons. The head of the section, Lea Rayner, reported to the committee in 1945 that:
"We can now train pigeons to 'home' to any object on the ground when air-released in the vicinity... bacteria might be delivered accurately to a target by this means.
﻿﻿ With the latest developments of explosives and bacterial science I suggest that this possibility should be closely investigated and watched. A thousand pigeons, each with a two ounce explosive capsule, landed at intervals on a specific target might be a seriously inconvenient surprise."

His  ideas were not taken seriously by the committee, and in 1948 the UK military stated that pigeons were of no further use.  However, the UK security service, MI5, was still concerned about the use of pigeons by enemy forces, and in order to prepare countermeasures, they arranged for 100 birds to be looked after by a civilian pigeon fancier, up until 1950.

Below are a couple of poster issued by the government during wartime, reminding the general public of the importance of carrier pigeons for communication purposes, and the  penalty for shooting them. 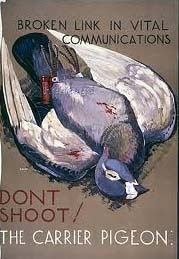 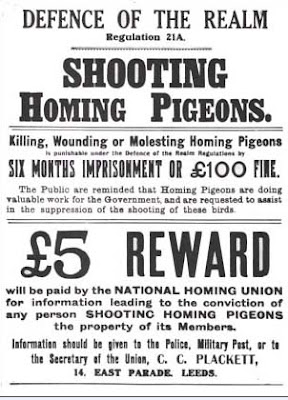 ﻿[I acknowledge the book " Keighley in the Second World War" by Ian Dewhirst, where some of the information came from for this article]
Email ThisBlogThis!Share to TwitterShare to FacebookShare to Pinterest