The Closure of Keighley Magistrates Court 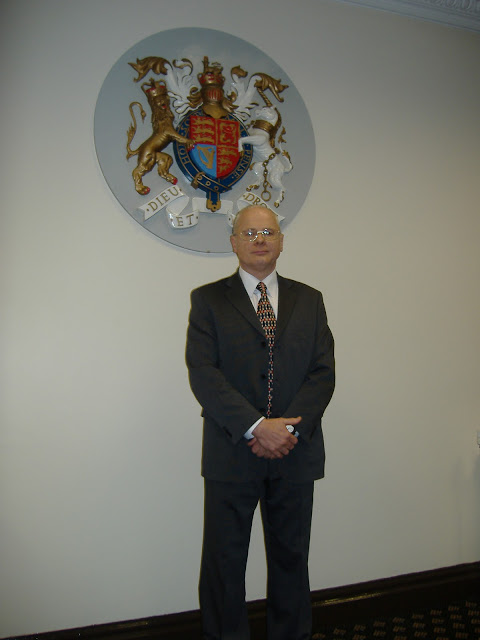 I seldom write articles involving myself, because the purpose of this blog is to write material about Bancrofts who have lived in the past, with details of how they lead their lives, but recently I was involved in an event which I consider will be an important moment in future local history, and so the details of the event should be recorded for future generations of researchers.

I have been a magistrate on the Keighley Bench since 1988, and Chairman of the Bench for the last 3 years. As part of that duty, I have had to be involved recently with the closure of the Keighley Magistrates Court, situated in Bingley, and the merger of our bench with the larger one in Bradford, to form a new Bench called "The Bradford and Keighley Bench"

The closure of our courthouse took place on 23rd December 2011, and here is part of the speech I made at the Closing Ceremony:

"Today is an important day in local history…..the closure of the Keighley Magistrates court, sitting here in Bingley.


Justice was administered in both towns going back hundreds of years. In Keighley initially on one day a month by the Town's Court Barons at the Devonshire Arms Inn, before moving to the first courthouse on North Street in 1831. The formation of the Keighley Borough Magistrates, is recorded in a book on display here today, having taken place in 1899 when the prominent people of the town at that time were brought together to form the first bench of Keighley magistrates."


Minutes of the first meeting of the Keighley Borough Bench 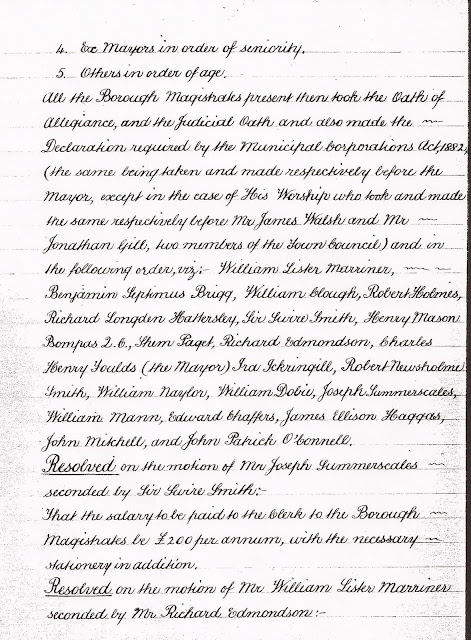 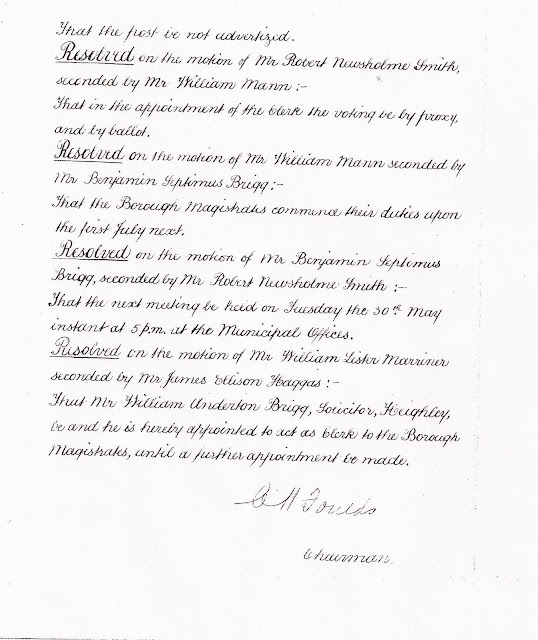 "Bingley’s justice can be traced back to the 16th century when part of the Old White Horse Inn was used as a court, with the cellar used as a prison cell and the stocks in use in the Inn’s courtyard….indeed the stocks still have pride of place just down the road from here in the town centre.

This is a sad day… sad for local people and sad for local justice. Ask any magistrate or solicitor in this court today, what is one of the most important things about dealing with justice, and they will tell you that it should be local justice, by local people, for local people. There are many benefits to magistrates being seen to be from the local community and administering justice with a local knowledge of the problems within the area in which they live, and of the people within that area. With this latest round of closures, not only will defendants have to now make their way to Bradford in future, but also victims and witnesses of crime as well, and I am sure some of them will now decide that it is just not worth the inconvenience.


Over a year ago, consultation started on court closures and despite good support from our local MP’s and a campaign by the Keighley News to keep our court open, the decision was made to close our court together with 92 other magistrate courts and merge the work with the adjoining areas….93 Magistrate's Courts is almost a third of the total in England and Wales so you can imagine the size of such a reorganisation. As well as Magistrate's Courts, a large number of County Courts are also to be closed at the same time. I feel we are witnessing the biggest changes in the structure and management of our legal system, certainly in my time on the bench, and I suspect that much more is to come with the recent announcement that there is now to be a review of the management structure of the courts service throughout the country.


We have always had court  closures and area mergers…. When I was appointed in the 1980’s there were over 600 magistrates courts in England and Wales….indeed our own bench came about by the merger of the Keighley & Bingley areas in the 1970’s, but we have never seen anything on this scale before. When this latest round of closures is complete we will be left with only about 240 magistrates courts in the whole of England and Wales.


I think everyone accepts that changes had to occur due to the big reduction in work that every court in the country is facing, and also because of the large budget cuts that the Ministry of Justice has to make, due to the state of the country’s finances. We also now live in times when we are expected to get more out of less, but our court had one of the highest levels of utilisation in the area, so it is a great pity that it chosen for closure.


As well as difficulties for future defendants, victims and witnesses, it is also going to mean difficult time for our magistrates, with nearly 100 of us now has to make our way to Bradford regularly to sit in court. We should always remember that magistrates are volunteers, giving their time for no financial reward, but who are just trying to be good citizens, and who want to put something back into society and make our area a better place for everyone to live in.


Politicians of today talk about the “Big Society”…which means people giving up some of their time to do voluntary work for the benefit of others in their community…well magistrates are a perfect example of this….our magistrates sat here collectively for the equivalent of over 2000 full days in the last 12 months….a fact that I think is not always fully understood by some of the people at the top making these decisions.
Dealing with justice in this country would be unmanageable without magistrates, giving their time freely, to deal with over 90% of all the court work in this country.


However we now need to look to the future… the decision to merge has been made to merge, and we are where we are, so we need to move on. Many hours of meetings have taken place to make sure that the new Bradford and Keighley Bench incorporates the best practises of both benches…it’s a new beginning and I am sure that our group of nearly 100 magistrates together with the 200 plus Bradford Magistrates will do their very best to make sure things run smoothly.


With any merger, change and compromise is inevitable, not just for Keighley Magistrates but for the Bradford ones as well, who have also seen big changes in the way they operate from next year. Magistrates are used to change…..it seems that we are continually having to deal with new legislation, which involves changes and retraining, so I am confident we can cope with this change.


They will be challenging times ahead….…it’s a new beginning but I am sure that our group of magistrates together the Bradford ones will do their very best to make sure it is a success.
And so I have one last duty to perform as Chairman of Bench, and it is to announce with a heavy heart that.....The Keighley Magistrate's Court is now closed."

And here's a nice letter I received recently from The Rt.Hon. Lord Justice Goldring, Senior Presiding Judge for England and Wales. 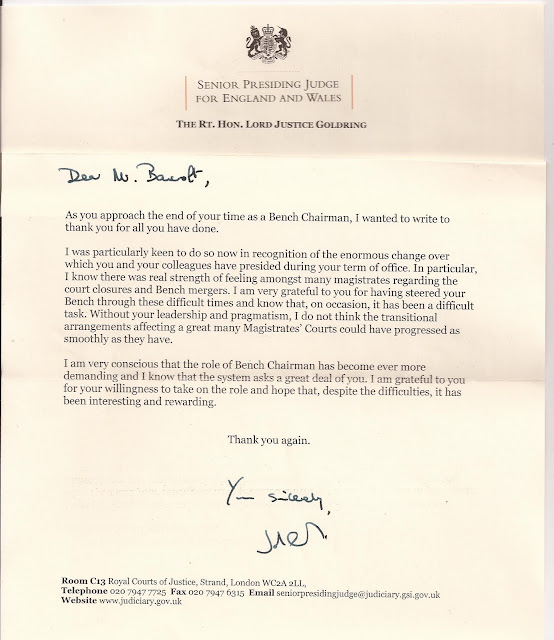 Here is what the local newspaper had to say about all this: 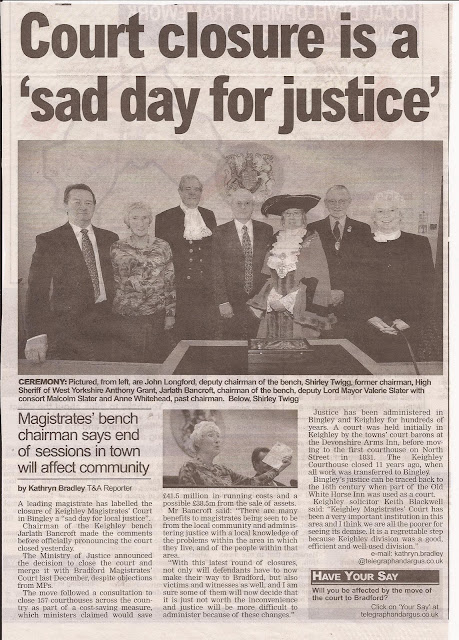 Present at the ceremony was the High Sheriff West Yorkshire, Mr Anthony Grant OBE, and the Deputy Mayor of Bradford, Mrs Valerie Slater

The Bench recently presented me with this gavel to be used at this closing ceremony, which is an item I shall always treasure.  The inscription on the box says:


"Presented to Jarlath Bancroft J.P.
The last Chairman of the Keighley Bench
2009-2011
In appreciation" 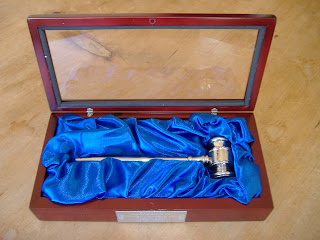