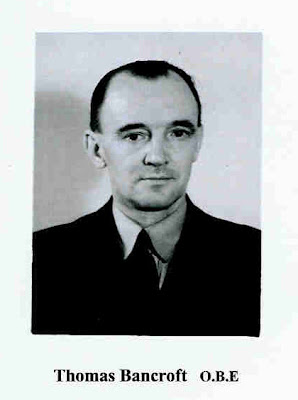 I have just been reading a very interesting book called “ From Woollen Mills to Flying Machines”, which is an autobiography of Thomas Bancroft O.B.E. [1897-1985]. It goes into fascinating detail, and paints a vivid picture about Tom’s early life from starting to work half days in the local mill in Denholme, near Bradford, at 11 years of age, before spending the other half of the day at school, and then at the age of 12, working a full 53-hour week in the mill. The book then goes on to talk about The First World War, albeit not the grim side, but the more day to day activities and then leads onto Tom’s later career working for Aircraft Company’s eventually to become the Works Director of Hawker Siddeley in Brough, East Yorkshire.
This first article concerns his early life at the Foster’s Mill in Denholme, prior to The First World War. A future article will be about his later life, working in the aircraft industry. 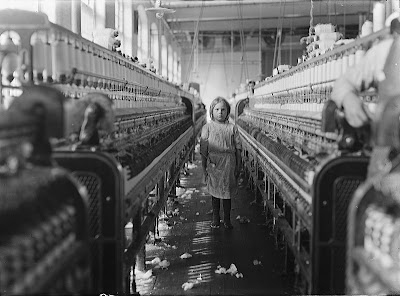 Whilst reading the book I was reminded of my Grandmother talking about her time working half-days in the local mill in the early 1900’s, a practice which was very common with all young children growing up in northern mill towns. The morning’s work started with a siren sounded to remind the workforce to “get to’t mill”. If anyone arrived late, they had to wait until the door was reopened again, and lost an hour's pay.
The noise inside was frightening to anyone not used to it. The machines were driven by long leather belts, which would stretch the length of the room, or shed as it was known, and wrapped around huge wheels. The ends of the belts were fastened with metal clips, and if any of these gave way, due to wear and tear, the flying leather could, and did, cause serious injury.
Despite the heat, the youngsters wore overalls, with the girls also wearing black stockings and clogs. Hair had to be kept fastened back out of the way of machinery, which in those days was unguarded and accidents were commonplace. Loose clothing, like the short smocks worn by the men, was easily caught up unless the greatest care was taken. The smell of lanolin, the natural wool oil, clung to clothing, and grease from the machinery made floors very slippery as it soaked into the floorboards. All this made the mills a serious fire hazard.
Children of eleven years of age, both boys and girls, started as doffers, who had the job of removing the full bobbins from the spinning frames and replacing them with empty ones. For this they received 1s 6d (7.5p) per week. They were supervised by older ones who had become proficient at it and then graduated to spinning. The many and varied processes in a woollen mill all required nimble fingers and a keen eye. Broken threads had to be joined with a neat, flat knot. A poorly repaired knot was known as a “slub”, and the inspector could identify which spinning shed this had come from, so that the careless worker could be reprimanded. I can remember my Grandmother saying that her inspector had a big long strap which he often used on the children if their work was not up to scratch.

Tom’s story starts with a wild shriek of the mill “whew” [mill hooter] gently rattling his bedroom window at 5.30am. This was it!....He had been lying awake for a long time waiting for this great day, when he ceased to be a school kid and became a man. He had been looking forward to this for months, and had been fully accepted by the Spinning Department Manager at W.H.Foster’s Mill, Denholme to start work at six o’clock that morning, a beautiful day, 6th June 1908…his eleventh birthday. After a pot of tea with his father, who was an Overlooker at the same mill, they both set off for work, up the main street to ….THE MILL!


His father then left him in the scurrying crowd of other part-timers at the mill door at around 6.00am, with a tap on his back, saying “ See you at 8.00 o’clock lad” After making his way to the Spinning Rooms, he was directed to the Overlooker, Percy Myers, who was walking along the long isles banging the floor with a foot wide strip of leather, some 4-5 feet long, attached to a short wooden shaft. The noise this made on the floor could be heard above the howling of the two long rows of spinning frames. Percy’s first words to Tom, on seeing his size was “ I’ll hev ta finned thee a box ta stand on”.
He then met Sarah, a nice lass of about seventeen, who looked after some spinning frames, and was given instruction as to what to do as a new “doffer”. He watched the more experienced boys and girls till 8.00 o’clock when the “Whew” blew again, and joined the swarm of men, women, boys and girls pouring out of the main gate. 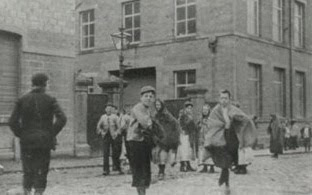 Just enough time to get home for breakfast and then back before the doors closed again at 8.30 am so he could get back to Sarah, before the Overlooker’s whistle blew to start work again. From then till 12.00 he then followed on, copying the other boys and getting the hang of doffing. It took him weeks before he do this properly, and found school dull after a morning in the mill. He couldn’t wait to get back again the following morning.
After he had picked up the knack of doffin, Sarah gave him some more instructions, about what to do when the thread broke on a bobbin. She was able to take the waste off the roller on the spinning frame, without stopping it and start it on the bobbin again. He had watched her do this scores of times a day with just a finger and thumb, so had a go under her watchful eye. When he tried to do this, he had to jump back from the frame sucking a blistered thumb and finger. Sarah stood there laughing and said “ It’s no good laking wi’ it, th’sta grab it ‘ard before it burns tha”. He collected a few more blisters before he got the knack, but then enjoyed watching the new lads burn their fingers as they also learned the knack.

When his twelfth birthday arrived, it found him as a fully trained doffer, and he automatically became a 53 hours a week full-time mill worker. On Friday, payday, he proudly handed his wage of half-a-crown to his mother, who always gave him something back. He felt he had grown up and was justifying his existence in a fine family life

The picture below shows Tom as a boy with his two younger brothers. 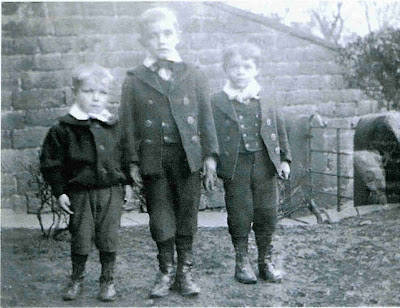 It's only after reading a story such as this that you realise how far we have come as a society. Those who complain these days don't know they are born!