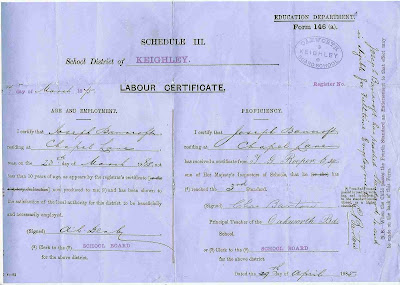 Following on from the previous article about child labour in the mills, one of our fellow researchers, Michael Northrop was reminded of his Grandfather Joseph Bancroft, who at the age of ten years old went to work at a mill in Keighley.

Michael can remember the story he told….. “ I had to walk three miles there and three miles back”. The family had very little money, and what young Joseph earned had to be given to his parents.
Joseph’s father, Jabez, was the Caretaker and Sexton of the Dockroyd Methodist Chapel in Oakworth.

Michael has passed on the ‘Labour Certificate’ issued to Joseph on leaving school, a requirement of the Elementary Education Act, which was needed by any employer before they could set a child on. The wording of the act was as follows:

Every person who takes into his employment a child of the age ten and under thirteen years, resident in a school district, before that child has obtained a certificate of having reached the standard of education fixed by the bye-laws in force in the district, for the total or partial exemption of the children of the like age from the obligation to attend school, shall be deemed to take such child into his employment in contravention of the Elementary Education Act 1876, and shall be liable to a penalty accordingly……PENALTY …40 Shillings

The certificate shown above, was signed by the child’s teacher at the school, and if you click on the picture you can read the following handwritten statement
“ Joseph Bancroft has reached standard 4 and is eligible for fulltime employment”
….at the tender age of only 10 years !!

Young Joseph therefore had to go to work in a mill, three miles away in Keighley, and spent all his life in the textile industry, working on the machinery rather than the production side, eventually becoming a machine fitter and toolmaker.
Email ThisBlogThis!Share to TwitterShare to FacebookShare to Pinterest

Thank you so much for your blog. I am researching a novel on the Butterfield family and the information is most helpful.