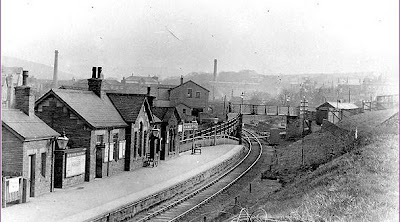 While reading through some old newspapers recently, I was reminded of the large number of accidents that occurred on the railways in the late 19th century, and the following fatal accident at Haworth Railway Station in 1882.
It concerned a man called Binns Bancroft who died at the age of 42, after being crushed by a moving coal train in the station.

Binns was born in 1840 at a house called “Throstles Nest”, which is still there today and is situated on the moors near Stanbury, looking out over the bleak Bronte moorland.
He was the son of John and Hannah Bancroft, and was one of at least eleven of their children.

Binns Bancroft married Hannah Chaplin at Haworth Parish Church on 24th December 1870 and lived at Clarendon Street Haworth from where he went to work for the local Co-operative Society, where he was employed as their coal agent.

On the afternoon of 19th December 1882 around 1.15pm, Binns was at the station, waiting for a coal delivery, and went over to the coal train, which had just come in. He checked with the guard to see if there was any coal on the train for him and the guard said there was one truck of coal allocated to the Co-op. Witnesses then told of how Binns attempted to get through between the buffers of the engine and the wagon, with his back towards the engine, and just as he had got between them, the wagons were closed up by the engine shunting them down the siding. An eyewitness, the guard, said he was carried about a yard, and killed on the spot. The body, when later formally identified, had no marks of external injury visible, beyond two or three slight black marks and a Doctor came to the station within ten minutes of the accident and ‘pronounced life to be extinct’

It was thought Binns was trying to get to the other side of the wagons, in order to take a card from one of them.

An enquiry on the accident was opened two days later at the nearby Royal Oak Inn.
Evidence was heard from eyewitnesses, the guard and the doctor who attended the scene shortly after the accident, and after hearing all the evidence, the jury returned a verdict of “Accidental Death”

His widow, Hannah, was left to bring up their five children, and eventually received the sum of £30 compensation from either the Co-op or the Railway Company. She later remarried a man called Holmes Feather in 1885 and continued to live in Haworth.

The photograph at the top shows the station around this time, and the one below shows the station in the foreground and the Royal Oak Inn in the centre. Both show a very smoky Haworth ….presumably from all that coal they were burning in those days! 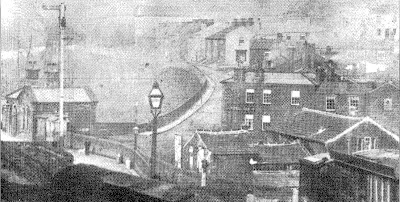 [So was this the end of Binns Bancroft?....maybe not!...click here to read how his ghost haunts Haworth Station]
Email ThisBlogThis!Share to TwitterShare to FacebookShare to Pinterest

Your blog keeps getting better and better! Your older articles are not as good as newer ones you have a lot more creativity and originality now keep it up!

Another great story....can't wait till next month!