Growing up wearing Clogs in the 1920’s 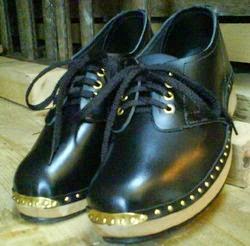 Whilst going through some old family photographs, I remember my father talking about his childhood growing up on the family farm in the 1920’s…spending his formative years wearing clogs, as the rest of his family also did. 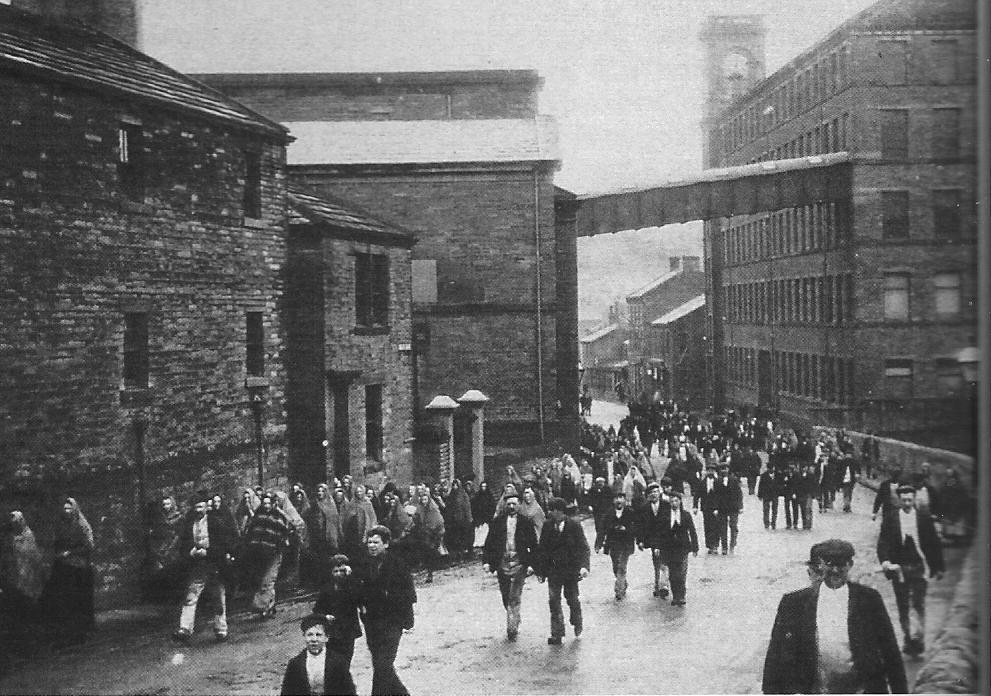 Clog wearing appears to have been a common practice even as late as the 1920. It was not just in the northern wool and cotton mills, where many people had memories of hearing the clatter of clogs on cobble streets whilst making their way to work in the mill every morning, as shown in this picture of workers heading to work at Foster's Mill, Denholme for a 6 o'clock start.

The practice of clog wearing  also happened with farm workers, such as my family, who  were  working in sometimes very wet conditions on the land, and needed footwear that kept their feet warm in winter and cool in summer as clogs did. Clogs also gave some protection to the toes with having metal toe fronts on them. My father never though that wearing clogs was anything out of the ordinary, or a sign of poverty, because everyone at his school or from his background in the farming community wore clogs at the time. 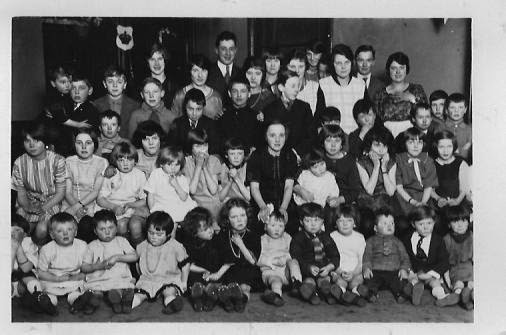 This picture shows my father in the middle front row, with his sister Gladys standing behind him.....note the studs in the bottom of the clogs of the two girls sat to the left of him. 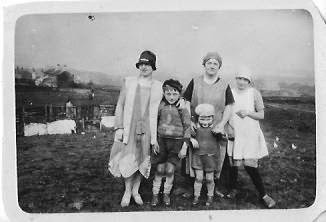 This picture shows my father, as a small child with his brother, sister and mother Hettie all wearing clogs with metal toe fronts The other lady on the left, whose identity is unknown, looks as though she came visiting them on the farm, as she is dressed somewhat more ‘fashionably’! 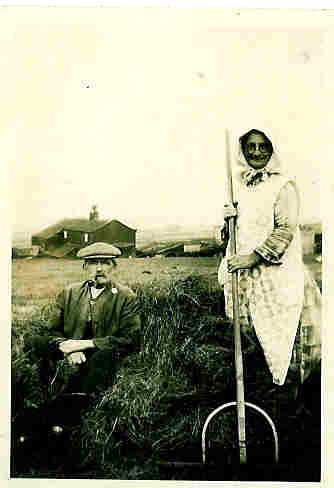 Pictures of my Great-Grandparents, Lister and Jane Watson, taken around the same time show that they too were clog wearers. This wonderful pictures shows him taking a break from haymaking with pipe in mouth and clogs on feet.…..the steel toe fronts are just visible. Jane is suitably dressed with bonnet to protect her from the sun and with the wooden hay rake in her hand. 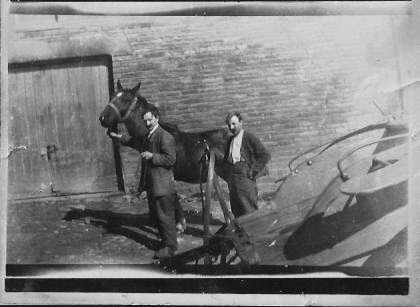 Clogs also gave some protection to feet when dealing with farm animals, and the muck and effluent they produce. This picture shows my Grandfather John and his brother, managing a horse, no doubt the clogs would have given some protection against injury, should the horse have decided to stand on their toes!


There are two explanations of the development of the English style clog. They may have evolved from pattens which were slats of wood held in place by thonging or similar strapping. They were usually worn under leather or fabric shoes to raise the wearer's foot above the mud of the unmade road, not to mention commonly dumped human effluent and animal dung. Those too poor to afford shoes wore wood directly against the skin or hosiery, and thus the clog was developed, made of part leather and part wood. Alternatively they have been described as far back as Roman times, possibly earlier

The wearing of clogs in Britain became more visible with the Industrial Revolution, when workers needed strong, cheap footwear. Men and women wore laced and clasped clogs respectively, the fastening clasps being of engraved brass or more commonly steel. Nailed under the sole at toe and heel were clog irons, called calkers or cokers, generally 3/8" wide x 1/4" thick with a groove down the middle to protected the nail heads from wear. The heyday of the clog in Britain was between the 1840s and 1920s and, although traditionally work in Northern England, they were also worn in many other parts of the country.

FOR just over a century, the area was known for making the horseshoe-shaped irons that were nailed onto clog soles, by a firm called Greens in nearby Silsden.

Several different shapes of clog iron were made – the duck toe, for a more pointed clog, was favoured in the Keighley and Craven area.

A round toe iron, known as a common toe, was largely used in industry, such as foundries, tanneries and quarries. In many of the coal mining areas a square toe was regarded as essential as a miner was able to kneel, balance the square toe on the ground and rest his haunches on the heel of his clog while he worked.

During the latter half of the 19th century, clog-iron making became more mechanised, with the introduction of hand-operated shapers, cutters and punches. These simple machines required fewer skilled men and increased output.

The Green’s business remained in the family for three generations, however Thomas’ grandson – Charlie Green – eventually found that he was unable to compete with the automated clog-iron makers. In 1950 he ceased production and donated the forges and much of the clog-iron making equipment to the museum in Keighley. 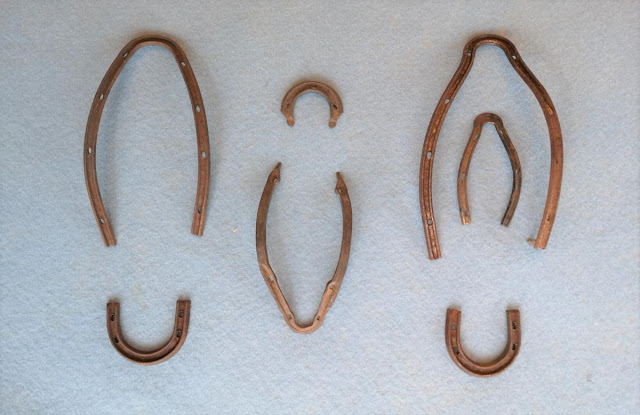 Clog irons: from left, a common or round toe and heel, a Colne strong iron and duck toe clog irons

The last clog maker, close to where I live near Keighley in West Yorkshire, was Harry Greenwood shown here standing proudly outside his shop, which was actually a cellar under a house, at Crossroads shortly before he retired in the 1970’s. I remember going to see him with our new born son in 1976, and asking him to make a miniature pair of clog for our son. After selling us the clogs he had just made, I can still remember his parting words which were…"ang on to ‘em lad, the’ll be wo’th summat one day”…We still have them…wonder if they are?

Clogs are still made today in Yorkshire, by a company called Walkley’s of Mytholmroyd near Hebden Bridge, who say they are the" UK's Largest Clog Manufacturer". They have a very informative website about everything concerning clogs, which can be found by clicking here. 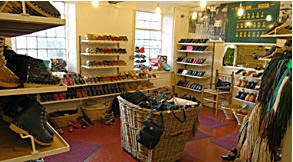 A fascinating and informative article.Really enjoyed reading it and loved the photo’s.

I have a pair of child's clogs, made in Bradford from a genuine design, like the one illustrated. My son wore them for about a year before he grew out of them. I'm hoping my grad-daughter will have the same fun clattering about on the pavement as he did 42 years ago.

I had some of Harry's clogs made when I was a kid, he was a friend of my grandad...When I was living in Bradford in the 80s I returned for some more clogs from the crossroads shop...I'm not sure who the chap was but I remember he was only open Satuday mornings. He measured me up for a pair.He contacted me saying he only had thick leather but assured me they'd be better for it and he only had red thread left. It's now 2022 and I have that very pair on my feet right now..They're almost as good as the were when they left the shop.

do your clogs have irons, i love the sound they make !

HI Brian,
No my minature clogs are just for novelty value so just have wooden soles.
Cheers
Jar