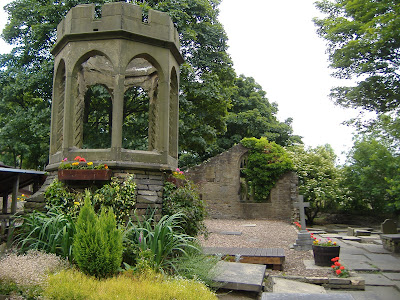 I had a very enjoyable morning recently looking around the St James Church in Thornton, near Bradford. Whilst there I went across the road to see the Old Bell Chapel and Graveyard, which served the community before, St James’s was opened in 1872.
As a boy, growing up in Thornton in the late 1950’s, I attended St James’s as a choirboy, and can remember looking across the road from the church at the overgrown jungle that was hardly recognisable as a ruined chapel and a graveyard, where over 6000 burials took place from the 1500’s, with the last one taking place in 1965.

The reason for the visit was to research a Bancroft family who were buried there. There are records of one Bancroft family baptised and buried there, and that is the family of Joseph Bancroft who seems to have originated from the Northowram or Ovenden area of Halifax.

Records show Joseph marrying Mary Whalloy [possibly a misspelling of Whalley] at Halifax on 26th September 1721. The couple then seem to have had at least three children in quick succession, who were all baptised in the Ovenden area…..Ann on 23rd September 1722, Elizabeth on 22nd December 1723 and then a boy called Lockey on 20th March 1725. It seems clear that Joseph and his family then moved over to the Denholme area, which came under Thornton Parish area, and the sad records show his children Elizabeth and Lockey both being buried within two weeks of each other in July 1726. There is then a thankful gap in dates until 12th June 1728 when another daughter Betty is baptised. It may seem a little strange to name a second child after the earlier one [i.e. Betty is quite often used as a alternative to Elizabeth], but it is not uncommon for this to happen, and the second child was baptised as Betty rather than Elizabeth. This practice is usually done in large families, where the later child is baptised in memory of the earlier one, but with a slightly different first name.
Then the really sad piece of information….written alongside Betty’s baptism record is a hand written note saying “ nothing due…mother buried the same day” and when looking in the burial records, there it is.

Joseph is listed on the record as a weaver from the nearby village of Denholme, but I have never been able to find any records of his birth or burial, so I don’t know what happened to him eventually, but what a sad life this family must have had. We can only guess what the cause of their deaths were, but it is known that many infants died in this time from what we class today as everyday illness, such as measles. There were also the ever-present problems of typhoid, cholera etc from poor living conditions. I suppose it is also quite likely that Joseph’s wife Mary died in childbirth.

There is no gravestone to mark the grave, although the exact spot is know thanks to good graveyard records. This family were one of many listed as “poor”, and therefore were probably put in a grave with other similar families.

A chapel and graveyard go back to the 16th Century on this site, and it is known that an earlier chapel was originally built there is 1587, prior to the later Old Bell Chapel being built in 1612 as is shown by the old date stone incorporated in the present day remains of the chapel. 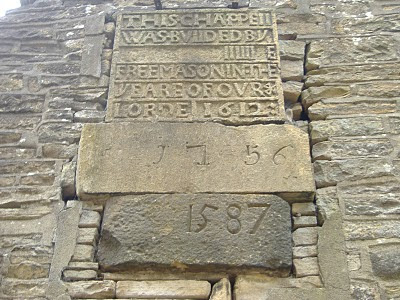 The Old Bell Chapel is of great historic importance, because the Reverend Patrick Bronte was the Curate there from 1815 to 1820, before he moved to Haworth….and as they say, the rest is history!

Four of Patrick’s famous children, Charlotte, Emily, Branwell and Ann were all baptised in the Old Bell Chapel during the period he was there, and the original font from the old chapel, used to baptize his children, is now on display in St James’s across the road. 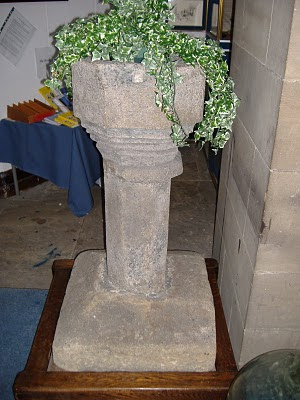 An interesting fact is that at one of his first services at the Chapel, on 23rd July 1815, he gave a thanksgiving for the victory at the Battle of Waterloo over Napoleon.

At this time the village of Thornton had deeply divided loyalties over religion because there was a large non-conformist following in the area at the nearby Kipping Chapel in Thornton, which was thought to be the largest of the Independent or Congregational Churches in the area and had an every increasing size of congregation. In contrast Patrick’s poor little chapel was already in a dilapidated condition so he wasted no time in trying to improve things, and one of his first actions was to stop the practice of allowing burials to take place under the chapel floor. This practice had been previously allowed, for the more wealthy locals who could afford the extra charge of a few shillings, but this was causing a putrid smell to permeate the building. Someone described the interior of the chapel at the time as follows: “ The interior is blocked on the ground floor, with high backed unpainted pews. Two Galleries hid the windows almost from view and cast a gloom over the interior of the edifice. The area under the pews, and in the isles is paved with gravestones and a fedit, musty smell floats through the damp and mouldering interior”
Shown below is the earliest picture available of the chapel interior, which confirms this description.

In the autumn of 1818, major renovation of the Chapel began. The gallery at the east end had become unsafe and had to be closed. For many years this had been used by the singers and instumentalists, who provided the church music because there was no organ. The church records at the time show that thre were two treble violins, one tenor violin and a violoncello, plus about half a dozen manuscript music books belonging to the chapel. Patrick’s plans also included building a Cupola [a bell tower] and to take down the south wall to rebuild it with six new large windows. The early photograph below, shows the chapel and cupola after this work had been completed. 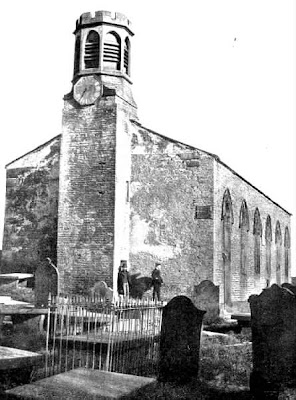 The Bell Chapel then fell into disrepair after the new, and much bigger St James Church was opened in 1872, and it was then left to fall down until all that remained was one wall and the original Cupola which was later rebuild at ground-level, at the other end of the chapel remains.

In 2000 an Action Group of Volunteer was set up to save what was left, and raise awareness of the history of this important site. They meet weekly to carry out maintenance of the site.
Shown below are two photos showing before and after shots of the remains of the chapel, together with a few more photos which show what a splendid job has been done around the graveyard, saving this historic site for future generations. 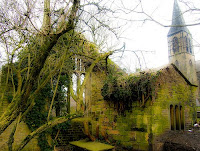 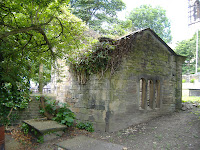 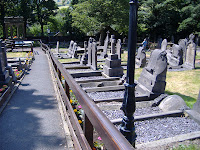 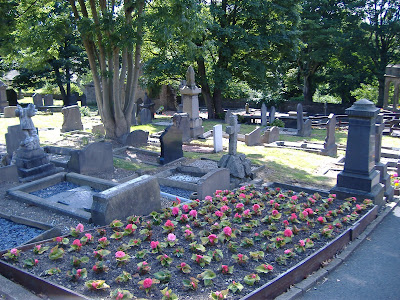 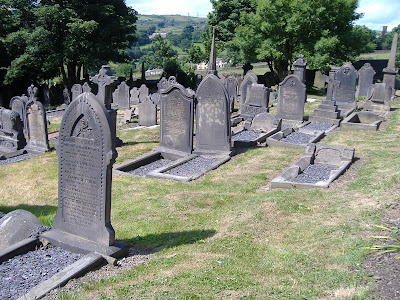 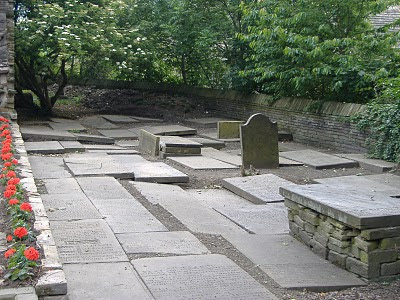 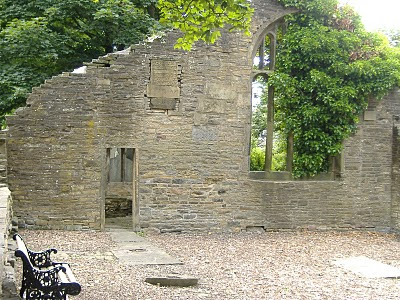 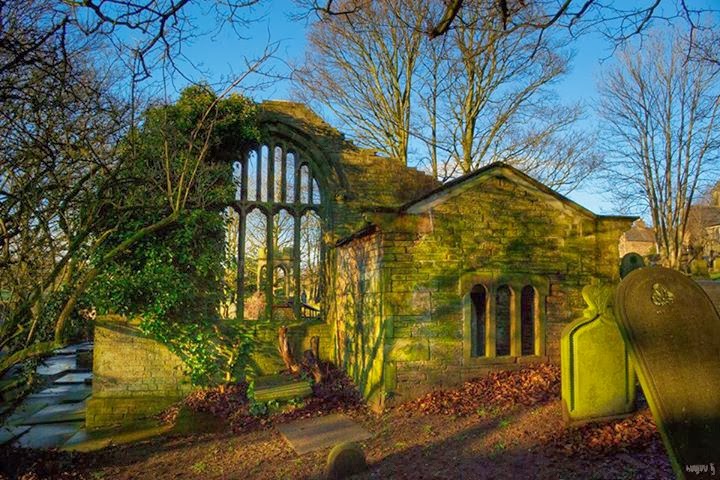 If anyone wants to know more about the Bell Chapel and Graveyard, or indeed would like to become a volunteer, please contact their coordinator Mr Steve Stanworth on:
stevenstanworth@blueyonder.co.uk
Email ThisBlogThis!Share to TwitterShare to FacebookShare to Pinterest

Thank you, that was extremely valuable and interesting...I will be back again to read more on this topic.

Thanks James,
I have amended the e-mail link.
You can also get more details by googling the following:
"Old Bell Chapel Action Group"

Wow neat! This is a really great site! I am wondering if anyone else has come across something
exactly the same in the past? Keep up the great work!

Cool blog, I hadn't come across bancroftsfromyorkshire.blogspot.com before in my searches!
Continue the fantastic work!

hey your blog design is very nice, clean and fresh and with updated content, make people feel peace and I always like browsing your site.

Howdy every one, good forum I have found It positively useful and it has helped me out a great deal
I hope to contribute & support other users like this forum has helped me

thanks for this tips