Here’s an interesting story about a Bancroft individual, who although not born in Yorkshire, spent the early 1900’s in Whitby, North Yorkshire, painting landscape scenes of the town and its people.

Elias Mollineaux Bancroft was born in Barton, Cheshire in1845, the son of Elias [Snr] and Hannah Mollineau.

By the time he was 24 years of age, the 1871 census describes him as ‘Artist – Fine art’ which was his way of earning a living throughout his life.

It appears that Elias, must have had a great deal of sadness in his early life because he was first married to an Elizabeth Kitchen in 1872, and then married again in 1875 to a Jane Kitchen. [both wives are listed as having a father William Kitchen, so I assume they were sisters. He is shown as an “artist” on both marriage records.

He had two children with Jane, Hannah in 1876 and Alfred in 1878, but tragedy must have struck again because after having a third child, Walter in 1885, Jane must have died. He marries for a third time to Louisa Mary Heald in 1888, Louisa being 16 years younger than Elias at the time.

Elias studied at the Royal College of Art and later taught at the Manchester School of Art. He is known as a landscape painter but his paintings often feature the buildings and the life of the local people.

Elias and Louisa spent time in Whitby, Yorkshire in the early 1900’s and there are many painting depicting scenes of the town. Here are just some of them: 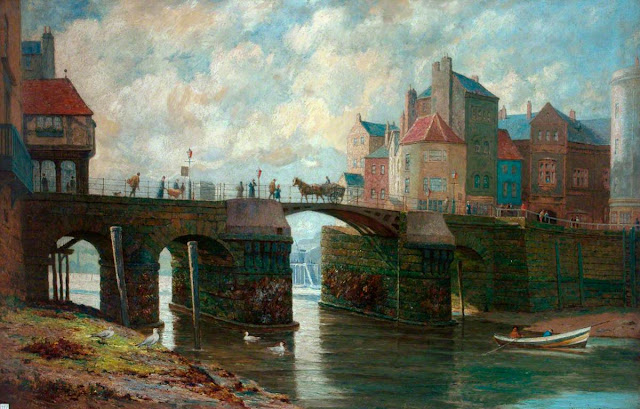 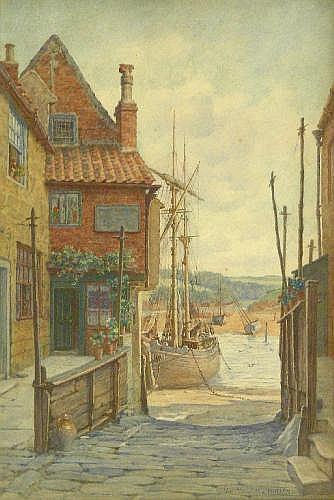 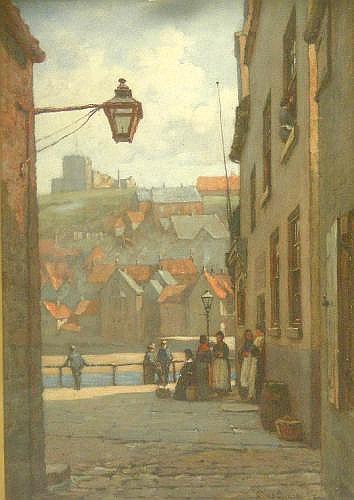 The 1911 census shows Eliza and Louisa staying in Manchester with friends. They were both listed as “Painters in oils”, and their occupations as “own account at home” meaning they were not in paid employment, and worked from home.

Before the outbreak of the First World War, many artists were increasingly travelling to France, Germany, Italy and Greece to find inspiration from the continent. Until late July 1914, Britain was largely preoccupied with domestic issues. Social, industrial and political unrest and the threat of civil war in Ireland received most of the nation’s attention. However in August 1914 Germany invaded Belgium and all eyes turned to Europe.

Britain issued an ultimatum demanding Germany withdraw its troops, the deadline passed without a reply and Britain declared war. All this happened relatively quickly and Elias and Louisa Bancroft, found themselves trapped in Germany. They were painting, as they had done for several years in Rothenberg, and had not bothered to get passports. The authorities gave them papers for safe passage, stating that they were artists not spies, and they began a hair-raising journey home amidst hundreds of troops, field guns Italian refugees and ordinary Germans returning from their holidays. These people proved friendly and helpful when offices wanted to arrest the Bancrofts. Elias and Louisa eventually arrived back in England, relieved but exhausted.

To finish this article here are a few more of Elias’s Whitby wonderful paintings, all produced in the early 1900’s: 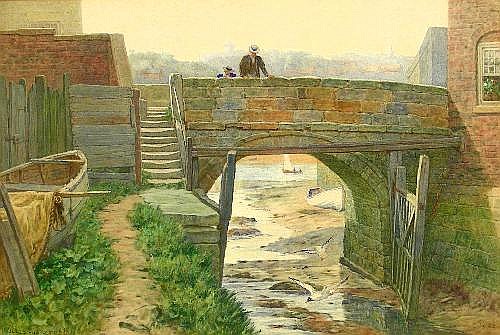 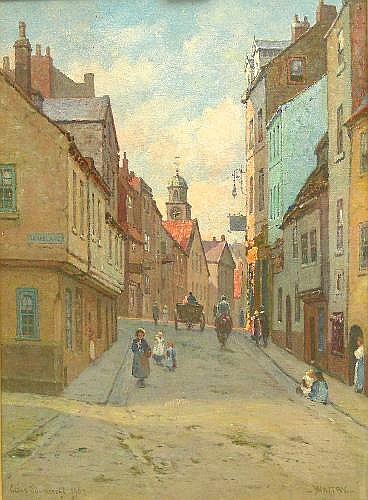 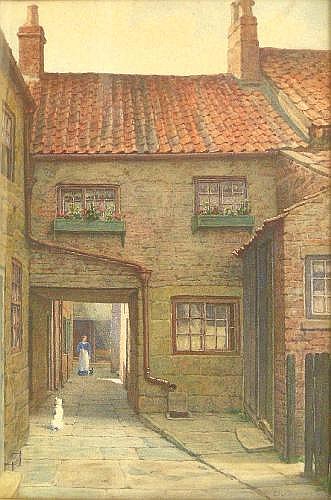 And finally, a rare drawing of Whitby from 1908, entitled "Old Whitby" 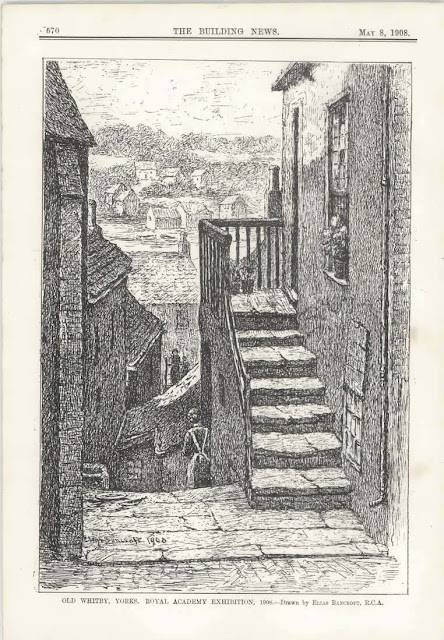 No comments:
Email ThisBlogThis!Share to TwitterShare to FacebookShare to Pinterest

Many of our Bancroft ancestors were ‘Woolcomber’, a difficult occupation at the best of times, usually men working from home in this cottage industry, but one which allowed them to earn a reasonable living until mechanisation took over in the mills of the early 19th century leaving them with no alternative but to move with the times, or seek an alternative way of making a living.

From the early medieval period through into the first half of the 19th century, England's worsted manufacturers held a great festival every seven years on February 3 to celebrate Bishop Blaise, the patron saint of woolcombers.

This obscure Armenian bishop was credited with having invented the wool comb and with its long and vicious spikes, was said to have been scourged and martyred in the 4th century.

The event usually took place in leading worsted northern towns such as Bradford and Wakefield, but in 1777 Keighley held its own Bishop Blaise celebrations. This audacious move by the manufacturers of Keighley was met with some derision and lampooned in Leeds Intelligencer by an anonymous writer as follows:

An “audacious” move by Keighley manufacturers wasn’t well received by everyone,

"Such doings at Keighley sure never were seen!

All was conducted with such great decorum!

Nevertheless, the Keighley celebration was a great success and fortunately a full description of it has survived written by a person who witnessed it. We are told that the procession began at 10 o'clock in the morning and continued throughout the district until five o'clock in the afternoon. It was led by six horsemen dressed in blue, with woollen wigs, tall grenadier caps and woollen sashes. Their horses were decorated with multi-coloured ribbons. They were followed by eight horsemen similarly dressed but in scarlet and with swords drawn. Then came two men on foot carrying a flag, perhaps in the form of a banner, which depicted Bishop Blaise and a woolcomber on one side and Jason with the ship that brought the Golden Fleece from Colchis on the other. Another two men followed carrying a flag with a golden fleece painted on both sides, which the writer of the doggerel inferred was the pub sign from the local public house, The Fleece Inn on Low Street, loaned by the innkeeper Jeremiah Booth.

Then followed a 'King and Queen', representing Jason and Medea, both mounted on horses, richly dressed and with crowns on their heads. Behind them came the bishop in his mitre and robes with a book in one hand and a wool comb in the other. He was followed by a mounted shepherd and shepherdess both dressed in green and carrying lambs. A group of wool-staplers came behind them with fleeces across their horses and they were followed by the tradesmen.

This second part of the procession was led by “the sons of Vulcan”, the comb makers fresh from their forges and carrying iron rods and the broaches, or steel pins, that were made from them. Next came the “son of Promethius, the charcoal burner…with his rakes and baskets tied to his horse's sides.” (Charcoal was used by woolcombers to heat their combs). A mounted band then followed playing popular music. Finally came the woolcombers themselves dressed in white linen with woollen wigs and grenadier caps bedecked with ribbons and escorted by eight horsemen dressed in scarlet and buff.

The account of the event concluded that “so great a concourse of people was never seen in this town at any one time. The procession was allowed (considered) by everyone that saw it, to excel everything of the kind that has ever appeared in Yorkshire.”

However, Keighley did not repeat the spectacle and left that to other towns. Bradford continued the festival every seven years, the greatest of which took place in 1825 with over 800 participants, of which 470 were woolcombers [see the poster above, advertising the event]. Two more smaller-scale festivals were held in Bradford, one in 1832 and the other in 1839, before industrialisation finally rendered them meaningless, with the invention of mechanical equipment such as the ‘Nobel Comb’ which put the cottage industry in a swift decline, as wool processing moving into the numerous newly built mills springing up in all the northern towns.

The city of Bradford, with its long history of being the wool capital of the county, still has a statue of St Blaize mounted outside its Wool Exchange building, where in times gone bye all the trading of wool in the area was carried out.

I wrote an article some time ago about the life of my ancestors, many of whom were woolcombers, which can be read HERE.