The Babbage Report of 1850 about Haworth 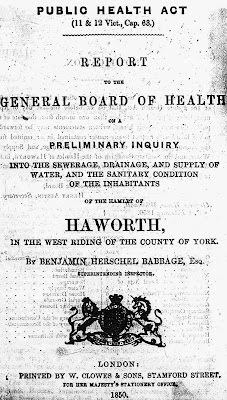 There were many Bancroft families living in the Haworth area in the 19th century, and many of them were baptised, married and buried at the Parish Church there [St Michael and all Angels]. I have records of over twenty family gravestones in the graveyard, and I know there were many more Bancroft individuals buried there, who were too poor to afford a gravestone. Burials go back to 1645, and it is estimated that 44,000 people were buried in the graveyard, which by the 1850’s was overcrowded and badly drained, adding to the already poor sanitation conditions in the village. Many of the Bancrofts in this area died of such things as “The Decline”, “The Gripes” or “Consumption”, which were all illnesses related to the poor living conditions in the town and surrounding area. Reverend Patrick Bronte was the vicar of the parish from 1820 to 1859 and dealt with the birth, marriages and burials during that time. The two pictures below show the parish records of the burial of my G/G/G/ Grandfather Joseph in 1837, and the baptism of my G/Grandfather Timothy in 1842. Both records were hand written and signed by him.

Haworth in the mid 1800’s was not the romantic village that one thinks of when reading all those books written by the Bronte sisters, but in reality was quite a grim place to live and had many social problems because of it’s poor water supply and virtual lack of sanitation. Over 40% of children died before attaining the age of six years, and the school records from this time are testament to the poor health of local children with smallpox, measles, whooping cough and scarlet fever frequently mentioned as the cause of death. The average age of death in the village was 25.8 [years], which was about the same as in Whitechapel, St.George-in-the-East, and St.Luke, three of the most unhealthy of the London districts.

The situation became so bad that Reverend Patrick Bronte took it upon himself in August 1849 to prepare a petition of 222 signatures to send to the General Board of Health in London, in an effort to improve sanitation in the village. No response was received to this so he sent a second petition in October of the same year, and then in February 1850 wrote to them again asking them to survey the water supply in Haworth. His persistence obviously stirred them into action and in April 1850 an Inspector, Benjamin Herschel Babbage, travelled to Haworth to conduct an investigation into the sanitary conditions in Haworth and the surrounding villages of Stanbury and Near and Far Oxenhope. His report found that the sanitary conditions were poor, with open sewers coursing down Haworth Main Street, and water leaching from the graveyard into the main source of drinking water. Here are some of his findings, which make grim reading: 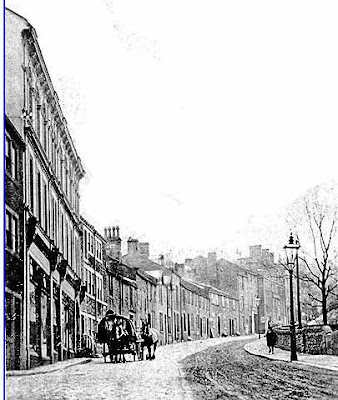 Sewerage
“There are no water closets in the town, and only 69 privies, being little more than one privy to every four and a half houses….I found seven houses in the main street without a privy….I found twenty four houses lower down with only one privy amongst them….I believe that it would be found that there are no more than two dozen houses in the whole town that have a privy to themselves….two of the privies used by two dozen each, are in the public street, not only within view of the houses, but exposed to the gaze of passers by, whilst a third, as though even such a situation were too private, is perched upon an eminence commanding the whole length of the street. The cesspit of this privy lies below it, and opens by a small door into the main street; occasionally this door is burst open by the superincumbent weight of night soil and ashes, and they overflow into the public street, and at all times a disgusting effluvium escapes through this door into the street. Within two yards of this cesspit door there is a tap for the supply of water to the neighbouring houses….there are no sewers in Haworth;…..as a consequence of the want of sewerage there is a contiguous to each privy a receptacle for the night soil, in some cases walled round… into these midden-steads are thrown the household refuse and the offal from the slaughter-houses, where mixed with the night soil and occasionally with the drainage from pigsties, the whole lies exposed for months together, decomposition goes on and the offensive smells and putrid gases are given off in close proximity to dwelling-houses, making them much more injurious.”

Water Supply
“Bad as is this state of things, [the lack of a sewerage system] perhaps the most crying want of Haworth is water, of which there is an absolute dearth in the dry season…..very few of the inhabitants use the pump-water for cooking or drinking, as they do not fancy that the water is pure and when the soakage into the ground from the midden-stead, and the small depth of the pump-wells are considered, there appears every reason to suppose that the general opinion upon this subject is correct….the supply of water upon the Head Well is so scant in the summer time that in order to have water for the Monday’s washing, the poor people are in the habit of going there at 2 or 3 o,clock on Monday morning, in order to wait their turn to fill their cans and buckets from the slowly running stream. It is stated that the water at this well is very bad at this season, and it is sometimes so green and putrid that cattle, which have been driven there to drink, after tasting the water, have turned away and refused to touch it again”

Burial Grounds
“The churchyard is almost full of graves….it would appear that 1344 burials have taken place in the last ten years….the practice at Haworth is to cover the grave with a flat stone, and the churchyard presents one entire surface of flat stones, some of them simply reposing upon the mound of earth which covers the grave….this practice is a very bad one as it prevents that access of atmospheric air to the ground, which is necessary for promoting decomposition; and beside, the stones take the place of those grasses and shrubs which if planted, would tend to absorb the gases evolved during decomposition, and render the process less likely to contaminate the atmosphere….drains should be laid very deep, below the greatest depth to which the graves would be dug and the drainage should be carried away by airtight pipes into a main sewer… care being taken to lead into one which has no direct communication with any house-drain. I consider the speedy carrying away in covered channels of the water charged with this most dangerous and most subtle matter to be one of the most efficacious means of diminishing the evils, which there can be no doubt always take place from the vicinity of burial grounds to inhabited places.”


Babbage Recommendations
Babbage’s recommendations for improvements in Haworth were as follows:
He thought that water should be collecting from the surface of the nearby moorland, and also collecting from two springs, which had a wholesome supply, and this should then be piped to a reservoir created in one of the many abandoned stones quarries in the area. The water should then be supplied via a new main running down the main street.
A complete sewerage system should be installed in the village.
The costs of the sewerage system would be £863.10s and should be covered by a rates charge per house of 3/4d per week, and the cost of a water supply would be £1274.12s.6p and should be recovered by a rate of 1 1/4d per house per week
As far as the overcrowded graveyard was concerned, he recommended that no more burials should take place there, and a new burial ground should be found a short distance from the village which should be thoroughly drained to a depth of eight feet, and that a ‘code of regulations’ be established to prevent graves being dug too close to each other, and also that no more than one body be allowed to be interred in each grave.
He also recommended that a new small slaughterhouse be established for the use of the village, and that all slaughtering in other places should be prohibited.

Nothing much seemed to happen quickly after Mr Babbage’s visit to Haworth, other than his report and recommendations, so in August 1851 Patrick Bronte again wrote to the General Board of Heath saying
“ Yet after, tedious delay, they have as far as we know done almost nothing….We might have thought that this arose from a press of more urgent business, had it not been that we have learned from good authority that their salutatory rules have been adopted and enforced in various other places where there was less necessity for them”.
Eventually Patrick Bronte’s persistence was rewarded when a clean water supply was put into Haworth in 1856. 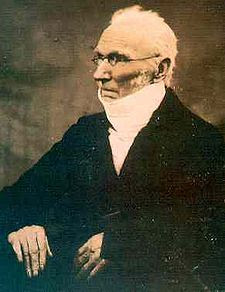 It is interesting to note that most pictures of Rev.Patrick Bronte show him with a scarf/muffler over his lower face and neck, and it is thought that he always wore this to try and protect himself from the noxious smells and diseases in Haworth. There still prevailed at this time something called “The Miasma Theory”, which lead people to believe that certain diseases, particularly cholera, were more prevalent in places where water was undrained and foul-smelling, and that the viruses were carried in the air. This theory was disproved in the late 1850’s, when it was found that these diseases were not airborne, but were carried in the water supply. Improvements in water supplies and sewerage systems reduced these illnesses dramatically.
Rev Bronte must however have been made of stern stuff because he lived to the grand old age of 84 years and outlived his wife and all six of his children, which was quite an achievement for anyone living in Haworth in those days!
Email ThisBlogThis!Share to TwitterShare to FacebookShare to Pinterest

Times must have been tough in Haworth in these times....thanks for another interesting story.

Another interesting story.
Thanks

Thanks for this good story.

It is very helpful!

Absolutely fascinating post. No wonder so many drank ale back then ..it was safer than the water!

Is from Mrs Gaskell's book about Charlotte Bronte after her death. Mrs G drew it herself however ...it's more artistic than accurate