Worker's revolt in the Mills of Todmorden

When you think about the Yorkshire folk who were mill workers in the textile industry in the 19th century, it is usually concerning the wool trade, but there were many mills in Yorkshire that were involved in the cotton trade, an industry which was generally more common in adjoining Lancashire.

This is the story of the three mills which James Bancroft rented, at a time of expansion in the cotton trade in the late 1800’s.....a period in history of great industrial unrest in cotton manufacture, as workers went on strike for better wages and conditions.

Millstead Mill known as “Bancrofts Mill” together with Cinderhill Mill and Lob Mill were all in the town of Todmorden, in the Upper Calder Valley, close to the Yorkshire-Lancashire border, and all trading as ‘James Bancroft & Co’ at different times between 1890 to 1899.


James Bancroft was born around 1855 in a tiny weavers cottage at ‘Higher Hob Cote’ on the outskirts of Oakworth, Keighley, West Yorkshire. His parents Stephen and Hannah Bancroft brought up a family of thirteen children in this small cottage as a hand-loom weaver. I wrote an article about the difficult existence hand-loom weavers had some time ago, which can be read by clicking here. The family moved over to Burnley in Lancashire when James was a boy, probably because his father Stephen, found work in one of the local cotton mills. James went on to marry a Frances Davenport of that town around September 1874. The 1881 census shows him living at 139 Abel Street Burnley with his wife and two young daughters, and lists his occupation at that time as a ‘Cotton Clothlooker’ which was an inspector in a cotton mill, in charge of checking finished woven cloth, and who would also remedy slight defects where required.

By the time of the next 1891 census, things had improved somewhat, because this shows them as living at Pickhall Terrace in Todmorden in 1891, with James’s occupation listed as an ‘employer’ and a ‘cotton manufacturer’, trading as James Bancroft & Co. James and Frances were living alone on the day of the census, with the children listed as visitors at other addresses for some reason.

Looking at James’s cotton manufacturing business at Millsteads Mill during the period between 1890 to 1891.
The earliest known details about the mill are that it was initially built around 1800, and traded under the name of Richard Ingham and Sons. From 1805 it then was occupied by at least four other companies until it became occupied by the Bancrofts 1890 and traded as “James Bancroft and Co” until 1899.

It seems as though James Bancroft only rented space in the mill during his time there because the Stansfield Rate Books of that time list the owner as a Mrs R Ingham, with the mill having a rateable value of £208.

During the Bancroft's time of manufacturing cotton from the mill there was a great deal of industrial unrest with the workers, leading to many strikes and walk outs, as well as much intimidation of the workers who continued to go into the mill during the unrest. The greatest period of unrest seems to have been shortly after James Bancroft took over the running of the mill.

In early 1891 a worker’s strike started which went on for over 24 weeks. The weaver’s strike pay costing the local worker's union £20 to £30 weekly, whilst the weekly income of the local union was only £14, which must have caused a certain amount of concern amongst the workers and the union as the strike went on for many weeks. Members of the union received, according to the amount of their previous weekly contributions, either 3 shillings, 6 shillings or 9 shillings, with 2 shillings per loom extra, less 2d per loom deducted to form a special relief fund.

The Burnley Express on 7th January 1891 listed the early days of the strike as follows:'The strike of weavers at Millstead Mill, Todmorden, occupied by James Bancroft and Co is still unsettled and there are no signs of a settlement. The masters have issued notices asking for experienced workers to apply for the work, and stated that they are paying full price list for the wages. Also guaranteeing 24s a week for weavers who have four looms. The weavers issued a notice in reply asking weavers to keep away from Millsteads Mill during the dispute, and calling upon them not to be mislead by statements made by Bancroft and Co. The weavers also state that if the firm of masters will pay full list prices, they will resume work. A crowded meeting of workers employed by Bancroft and Co of Todmorden, was held on Monday evening, when deputations from the Northern Counties Weavers Association, and from Bolton and Todmorden were present, and urged the weavers to go on strike till the masters agreed to pay the fixed standard prices. The result of that is that about 150 weavers struck work yesterday afternoon’.

The following week the newspaper gave the following report, when it optimistically reported that the strike looked to be over, however this turned out to be incorrect: ‘The strike at Bancroft’s Millstead Mill at Todmorden, which had been going on for ten weeks is virtually at an end. Yesterday a meeting of the weavers was held at Castle Street School, when it was resolved to send a deputation to wait upon the employers, in order to try and come to terms. The deputation which consisted of two none members of the union, presented their report to the officials, whereupon it was announced to the meeting that if the masters adhered to the terms offered, the strike would be at an end tomorrow.’


By 21st February 1891 the local press started to report on further unrest within the worker's ranks, as their situation became ever more desperate:

‘The strike at Bancroft Millstead Mill has now entered its 14th week. There has been some lively proceedings between strikers and the new hands, and it is said that a considerable number of summonses are to be issued regarding this.’


Cases of intimidation then started to appear in the courts. Here is a newspaper report of one such incident:


‘On Monday at Todmorden Police Court, Crabtree Marshall, weaver of Todmorden, was charged with intimidation by the act of following one Roseanna Greenwood to her home. The case arose out of the strike which has been going on at Bancroft’s mill at Todmorden. The complainant came out with other weavers at the mill, and for a time she received strike pay, and then got employment at another mill, whilst still receiving her strike pay. Eventually she went back to her usual employment. These acts seem to have aroused the ire of her fellow strikers, and on the 9th inst. They showed their disproval by forming a procession and accompanying her home, hooting on the way. A great deal of interest was centered in the case, which occupied the magistrates for 9 hours. The bench imposed a fine of 40s and costs, and ordered the defendant to pay 2 guineas towards the prosecutor’s fees. There are several other such cases, which were adjourned till next Thursday.’ 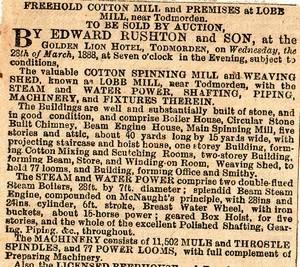 The Todmorden Advertiser of 6th March 1891 reported that various workers at Millsteads Mill:‘Were charged with assault against weavers in the strike, and later that month allegations of intimidation were made against non-union weavers.’
Finally by 2nd May 1891 the local press were able to report the end of this long strike:
‘The weavers of Bancroft & Co’s mill at Todmorden have returned to work after a strike lasting 24 weeks. The firm agreed to pay scale wages.’
There seems to be no more reports in the press of strikes at Millsteads Mill, however on 18th April 1894 several thousand pounds worth of damage was caused by a fire at Bancroft’s Mill Todmorden. The fire was covered by insurance. The newspapers reported:
'Destructive fire at the works of Messrs Bancroft & Co. Millsteads Mill, Castle Street, in a portion of the mill known as “Old Building”, doing damage to the goods and machinery.'


The risk of fire was ever present in cotton mills, due to poor working conditions, oil soaked floors, and the large amounts of flammable materials left lying about. The mill had suffered a similar fire a few years earlier on 30th December 1885, when the local press reported the following story:


‘Great fire at Millsteads Mill, Castle Street, estimated damage over £3,000. The new steam fire engine was employed for the first time. At first, there were doubts whether they were justified before it had been formally accepted and a trial made. The Surveyor, Clerk and one or two other members were appealed to, and ultimately Mr. John Dugdale, Chairman of the Fire Engine Committee, ordered it out.’ 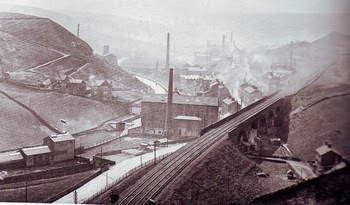 One of the other mills James Bancroft seems to have rented was Lob Mill in Todmorden, between 1893-1897, it having stood empty for several years beforehand when the owner, a John Hodgson, tried to sell it off. The following newspaper advert of 1888 describes the mill and contents in some detail and provides more information about the size of the premises.

'Freehold cotton mill and premises at Lob Mill near Todmorden to be sold by auction on 25th March 1888.


The machinery consists of 11,502 mule and throstle spindles and 77 power looms, with full complement of preparing machinery. 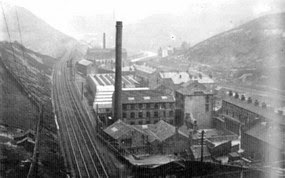 The third mill James rented space for cotton manufacture was Cinderhill Mill in Todmorden. It was owned in the 1890’s by the Ingham family, a family who owned several mills in the area at that time. A local business directory of 1891 listed James Bancroft & Co, as operating 1000 looms from Millsteads and Cinderhill Mills, which was a sizable operation, and must have employed many workers. Records also show that Cinderhill Mill was partly unused during this period and had a rateable value of £215. After James Bancroft’s occupation, it became an engineering works in 1908, and then converted back to cotton preparation, and was still operating as such until a few years ago.

Mystery surrounds the whereabouts of James Bancroft after his time in the Todmorden mills because by the time of the census in 1901, Frances is shown as living at Piccadilly Road, back in her home town of Burnley, Lancashire, without James present at the address, but still listing herself as ‘married’ and an occupation as ‘Cotton Cloth Salesman’. Her four children, 2 sons and 2 daughters are all still living with her, but there is no sign of her husband James, either here or elsewhere, and no record of his death that I can find.

The mystery of James disappearance continues, as by 1911, Frances and three of her four children had moved to Northendene in Cheshire, where Frances is now shown as having 'no occupation' presumably being supported by her family. 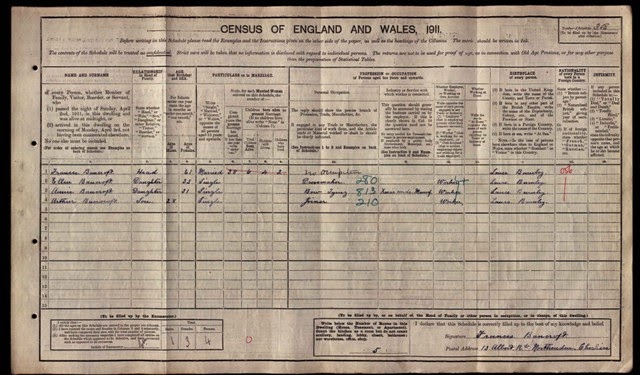 
The interesting fact is that even by 1911, she is still describing herself as ' married for 38 years!' It seems very odd that a man of such standing in the Todmorden mill community as James Bancroft could have just disappeared. If he had in fact died, Frances would surely not have listed herself as 'married' on two consecutive census records.....a bit of a mystery....was his disappearance linked to all the conflict with his workers?....or did he just go off and start a new life elsewhere....wonder what happened to him?