Even today we hear a lot about tuberculosis [TB] in farm animals, in particular with cattle, and yet this is not a new phenomenon.

From the late 19th century, moves to prevent infection from tuberculosis became an integral part of local government public health schemes. While the scale of action was dependent on individual authorities and ratepayers, interest was not limited to the pulmonary form of the disease. Effort was also directed at tackling bovine tuberculosis, which by the 1890s had become “the most important disease of cows”.With meat and milk identified as the main vectors, moves to detect infected livestock and limit the spread of the disease became part of a wider preventive strategy. Measures were introduced to control the sale of tuberculous meat and milk. Eradication schemes were promoted, as concern merged with a growing interest in food safety and agriculture, and became caught up with debates on national efficiency, farming and child health.

Local and national attempts to limit infection from bovine tuberculosis were fuelled by fears about the prevalence of the disease in cattle. A transition in the nature of agriculture, with a shift from arable to livestock and dairy farming, combined with farmers' apparent unwillingness to stamp out bovine tuberculosis, ensured that levels of infection remained high until the 1950s.

Here’s a story from a local newspaper of the local authority strict enforcing the rules in 1892 to prevent the movement of cattle from one area to another, and the trouble  John Bancroft, a farm worker, got into for breaching the rules at the time by only 150 yards!

“John Bancroft, farm labourer, of Pecket Well, Hebden Bridge, was summoned for removing two head of cattle out of the Keighley Division [which was declared an infected area] into the Todmorden Division, in contravention of an order made by Board of Agriculture. The defendant pleaded guilty. Superintendent Fearnside said that on the fourth instant, about five o’clock in the afternoon, P.C.Hodgson saw the defendant drive two head of cattle out of the Keighley Division into Wadsworth, which was in the Todmorden Division. The defendant, in reply to the officer, said he had brought the cattle from Skipton. This was contrary to an order made by the Board of Agriculture on the 14th December last, which provided amongst other things that any person driving cattle from a scheduled district into a none-scheduled district was liable to a fine of £20. He [the superintendent] had received instructions from the Clerk of the Peace to be very vigilant in matters of this kind, as the Agricultural Board were wishful to have the order strictly carried out. He would remind the Bench that this particular locality was a difficult one to watch; the road in question, which leads from Pecket Well to Haworth, was much frequented by cattle dealers in contravention of this order. If the Bench were satisfied that the case now before them was proved he should have to ask, on behalf of the Clerk of the Peace, for a substantial penalty to be inflicted. P.C. Hodgson then gave evidence stating that the defendant had got 100 Yards over the boundary before he spoke to him. Notices similar to the one now produced had been posted in the district. The defendant said he bought the cattle at Skipton, and he could not get them in anywhere. In reply to Mr DJ Crossley, the defendant admitted that he had seen noticed posted. The Bench inflicted a fine of 20/- and costs. The Chairman pointed out to the defendant the seriousness of the offence, especially when diseases in cattle were so prevalent.”

It’s not clear from the newspaper report, if John Bancroft had to pay the fine and costs himself, or whether his employer met the cost, as 20/- plus costs for what was not a small amount in those days of a farm labourer’s wages. It probably however made him more careful in future when droving cattle any distance. 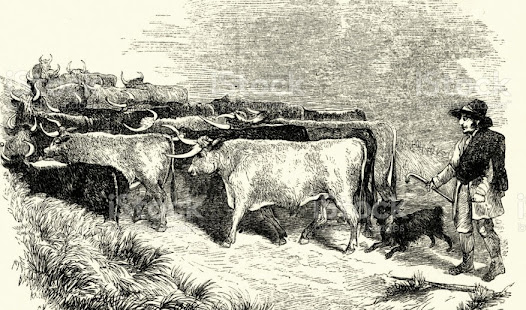