When one Bancroft married another Bancroft 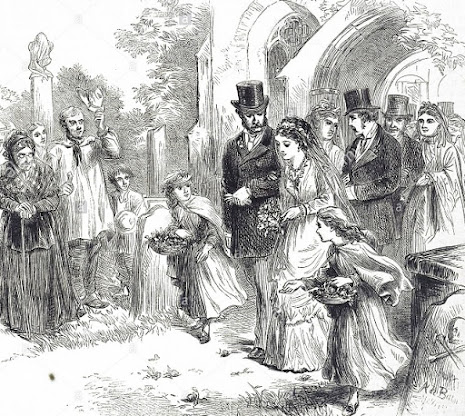 Our surname of ‘Bancroft’ is generally not a common surname throughout the country, but there is one area where it was very common indeed in times gone by… West Yorkshire.

I produced a list of all Bancroft birth, marriages and burials in the Haworth Parish area which can be read here:

Whilst going through some parish records, I came across several marriages where both bride and groom were both called Bancroft.

Some were distantly related while others were not, and I suppose that in olden days, when people never travelled far it was inevitable that they would bump into their relatives, especially when some of these families were large…..[ for example my G/G/G Grandfather Joseph Bancroft had fifteen children all living around the village of Oxenhope]

The following page from Haworth Parish records, shows three Bancroft baptisms all on one day, 24th July 1831, although to be fair two of the children were cousins.

Joseph was born in 1831, the son of Michael and Ann Bancroft and was baptised by the famous Reverend Patrick Bronte at Haworth Church on 24th July 1831 as the following record shows.

His father, Michael, was a weaver by trade, probably working on a hand-loom from home and living in the nearby area of Bocking, which although geographically was in the Bingley Parish area, was closer to the Haworth Parish Church.

Sarah Bancroft was born 0n 19th August 1836, the daughter of Stephen and Hannah Bancroft. Her father was also a weaver and moved around looking for work in the various mills, probably working as a weaver in both the wool and cotton trades. Although brought up in Oakworth, nr Keighley, in Yorkshire, he was living in the Colne area of Lancashire with his family when Sarah was baptised later that year. The family consisted of fourteen children, and Sarah had moved back over to Oakworth at the time of her marriage, living very close to Vale Mills at Oakworth where she was probably working.

The couple married on 31st March 1857 at Keighley Register Office but the marriage was a short one as Joseph died within 3 years on 26th October 1860. I have not been able to determine his cause of death at this young age.

The 1861 census shows Sarah living alone as a widow at Crossroads near Keighley and supporting herself by working as a worsted weaver in one of the local mills, where  there were no shortage of work at that time.. Within a few doors of her house lived her sister, Susannah, which must have been some comfort to her as a newly widowed young woman of only 25 years.

Sarah eventually went on to marry again to an Abraham Moore and had a family of at least six children with him. She died in 1891 and was buried at Christ Church, Oakworth.