The Bancroft records from Haworth Church

Our surname of ‘Bancroft’ is generally not a common surname throughout the country, but there is one area where it was very common indeed in times gone by….Haworth in West Yorkshire.

Haworth Church, or to give it its proper title, ‘St Michael and All Angels’, has parish records going back to 1645 which include many Bancroft individuals from the local area.


I was recently given details of all the Bancroft baptism, marriage and burial records for
'St Michael’s and All Angels' at Haworth, in a spreadsheet format, and its only when you see these lists of individual Bancroft records, that you realise how many of them were living in this small area....many of them related to each other. I appreciate that much of this information is readily available to some degree on  various genealogical websites on the internet, but I think these lists, gives some further information about the individuals. Although some of the marriage records are incomplete, they should provide some useful details to Bancroft family researchers.

Please click on the following links to view the Bancroft lists. 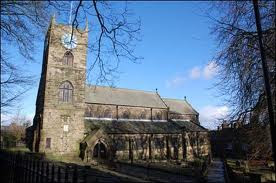 Looking at the history of 'St Michael and All Angels', the oldest part of the present church, is the lower part of the tower, dating back to the 15th century, and  the church was rebuilt in 1879 by the Rev'd Wade, who had the old church demolished leaving just the tower. Its foundation stone was laid on Christmas Day, 1879, and it was consecrated on 22nd February, 1881. 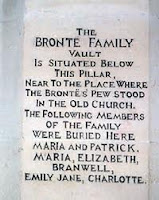 Haworth village and the church are know world-wide as the home of the Bronte family.

Patrick outlived his wife and all six of his children, and  they were all  buried at the church in a family vault, except for one daughter,  Anne, who died whilst on a visit to Scarborough, and is buried there.

Many of our Bancroft ancestors were baptised, married and buried by Rev'd Patrick Bronte during his time there. The two pictures below show the parish records of the burial of my G/G/G/ Grandfather Joseph in 1837, and the baptism of my G/Grandfather Timothy in 1842. Both records were hand written and signed by Patrick Bronte. 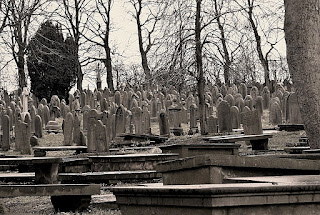 Haworth graveyard has many gravestones, as the picture on the right shows, but there are also many graves, including those of my ancestors, that do not have a gravestone, which makes pinpointing some actual grave sites difficult. It seems hard to believe that this little church has an estimate of over 40,000 people buried in its graveyard and by 1849 the graveyard, became so overcrowded and badly drained, that it started affecting the already poor sanitation conditions in Haworth. Patrick Bronte lead a campaign for improvements be made regarding the village's desperate sanitation problems, and Benjamin Herschel Babbage visited Haworth and produced a report for the General Board of Health, with recommendations to improve the facilities, and they  eventually acted on his recommendations.

Currently a great deal of work is going into fulfilling the ambitions of a five-year plan to repair and restore this splendid Haworth Parish Church building.The first phase of that plan, the repair of the south-facing roofs and restoration of the tower, has almost been completed, after a two-year fund-raising programme that met the cost of £227,555.00 with the aid of grants by such bodies as English Heritage, the National Churches Trust, the Bradford Diocesan Church Buildings Fund and Yorkshire Historic Churches Trust, together with donations from many other individuals, community groups and interested parties. Members of the congregation have also worked hard to provide around £10,000 from events such as master baking classes, fayres and concerts.
Work on raising the next tranche of money to undertake the repair of the north-facing roofs and other urgent tasks in the second phase of the plan has just started, and it is estimated that a further £1.25 million will need to be raised to complete the whole three-phase project.

Brilliant blog Jar, love all the information you have pulled together....thank you for continuing to share.

Great information! Thank you so much for all the work you do -the stories, the pictures, the sourcing. Our history comes alive. Thank you for sharing.