I was recently given a copy of the Centenary Book for St Paul’s Church, Denholme near Bradford covering the years 1846-1946. The book has an interesting chapter about the church bells and lists some details about three Bancroft brothers who were bell ringers at the church. They were Frank [1876-1938], Albert [1879-1930] and Tom Bancroft [1881-1954], who all grew up in the village and had connections with the church. All were baptised and  buried at St Paul’s and were the sons of Thomas and Mary Bancroft, who lived at 11 Old Road, Denholme.

Albert Bancroft [1878-1930], lived in the village all his life, and was married twice….firstly to Ellen Iredale, who he married at St Paul’s in 1899, but who sadly died shortly after. He then remarried a young widow called Clara Haworth in 1904 who already had three young children. Albert went on to adopt the three children and they then had another son of their own.  Albert served in the army in WW1, but was hospitalised  in August 1917 at  Bury Hospital with trench fever and rheumatism part way through the war, having been on active service since January of that year. He lived most of his life on the Main Street at Denholme, and worked at Foster's Mill as a mechanic in the spinning department. He is mentioned in the Church's Centenary book as being one of the team of ringers, who on 12th November 1905 rang a 'date touch' consisting of 1905 changes which lasted 1 hour and 10 minutes....he being the ringer of the 4th bell.  Albert died on the 2nd December 1930 and his gravestone at St Paul’s is shown below. 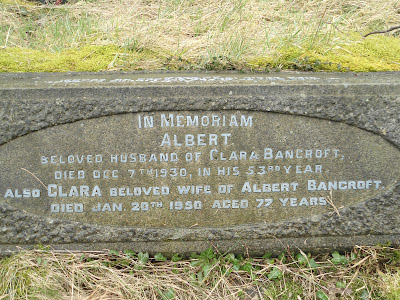 Tom Bancroft [1881-1954] again worked at Foster’s Mill as a mechanic, and married Amy Bairstow in 1903 at St Paul’s. The couple do not seem to have had any children, and lived at 11 Old Road, the house where Tom's parents had lived. As well as bell ringing, Tom was also a member of the choir and the centenary book mentions that he took part in the 60 year celebration service in 1906 at the church, as an ‘alto’ singer.

Frank Bancroft [1876-1938] lived at 23 Mary Street in the village, and also worked at Foster’s Mill as a woolsorter. The job of a woolsorter was highly prized within the textile industry, being very skilled, well paid and requiring a 7 year apprenticeship,but was not without it's hazards.......read my earlier article about 'The Woolsorter Disease' by clicking here. Frank married Janet [known as Janey] Dobson in 1901. Jane died in 1929 at the Keighley Fever Hospital, of Scarlet Fever. Frank died at his home, 23 Mary Street on 23rd March 1938, age 62 years, and he and Jane are buried in a tall obelisk type grave belonging to Jane's family just inside the gateway at St Paul's. 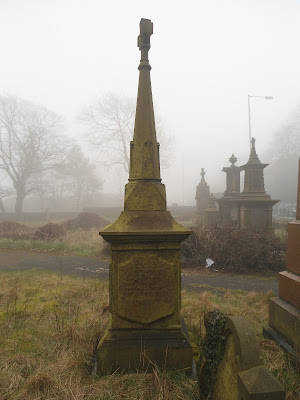 Both Tom and Frank Bancroft are mentioned in the Church Centenary Book , as 'other ringers who have done good service in the Belfry, and whose names do not on the Peal- Board.'

The bells themselves had an interesting history. When the church was originally consecrated in 1846, it only had one bell which was a gift from the original founders, and that was the situation for the next 30 years. However in 1876 a further seven bells were bought with money provided by local dignitaries and arrived at the church in ceremony style They had been manufactured by the well know company of Mears and Stainbank, from Whitechapel in London,who had been in existence for over 400 years, and one of their most famous achievements was to produce Big Ben in the Houses of Parliament. The bells made their journey from London by rail, and on arrival at Bradford Station, the railway company specially selected and prepared two waggons to be drawn by six horses, three black and three bays on to Denholme. The bells were carefully positioned on the waggons so that the names of the donors, along with the inscriptions, could be read along the route. As the convoy neared it’s destination it was met by a large gathering people , including a brass band whereupon a procession was formed; the band at the head followed by the vicar, churchwardens, bell committee and finally the ringers. On reaching the village there was a welcoming reception, with the bells being paraded throughout the village prior to installation in the belfry. During installation the original bell, which weighed over 10 cwts was re-hung to become the seventh bell in a peal of eight, and the bells were inaugurated on 4th November 1876 by the Bradford Old Society of Change Ringers with a 'date touch' of 1876 changes of Kent Treble Bob-Major.
A life long church-goer, called Tommy Kinsley gave the following memories of his time as a bell ringer at St Paul’s, and a problem that was caused when they tried to play hymns with the bells and therefore got into trouble with the Church’s main benefactor, Mr. Garnet Foster, who was a church warden for over sixty years, and was also the largest employer in Denholme, including the three Bancroft brothers. He was the owner of the mill which dominated the village, and therefore not a man to got on the wrong side of. The Victor Bancroft, mentioned in the piece, was the mill accountant, and was not related to the three bell ringing brothers in this article.
“ I started goin’ to church when a wer’ a lad and I wer’ int’ Boy Scouts. When I started it were 2 fourths, 2 thirds, a second, and a full pull, if you understand that. We 'ad a big sheet of paper wi' all t' eight bells on, an' whenivr yor number was on there, you 'ad to follow that in your mind, so all the while you were ringin', you were countin’. Everyone’s mouths were countin’, all the way through.
But it were a dangerous job were  bell ringin’, because they were heavy bells before they had ‘em altered. When you threw your rope for’ard, if it caught under your toe it’ed tipple you up. That’s why when you were ringin', you didn’t pull it straight darn, you threw your rope out. Some of us what weren’t s' tall, we had to stand on boxes. We played Bob-Major, and all such as that, then we started playin' hymns and o' course Garnet Foster didn’t like that, so he 'ad us in his office. Victor Bancroft opened them doors and he said “What do you want?” I said, “We’ve been ordered here to see Mr Foster”, so we went in and Mr Foster said, “ Now these bells were hung for change ringing, not for ringing hymns” You see we’d been playing ‘Now the day is over’ because you can get that because it isn’t above an octave and it isn’t below, and the bells int’ church are just an octave, eight bells. And so he played pop wi' us did Garnet Foster, and we had to stop it".

Also here are some reminisces by another regular churchgoers, Mr. Clem Heap, who gave some personal thoughts about the bells.
“ I remember the occasion when I was young, of being allowed up into the precinct of the belfry on a warm evening practice night. My cousins were ardent bell ringers. Up the narrow staircase into that loft of thundering sound, I can see their faces gleaming with perspiration as they pulled on the ropes, with such rhythmic precision. They just winked and smiled as we stood amazed and bewildered…..They were always rung on special occasions, and toned for the passing of loved ones…They were silenced in time of war, but I remember those bells at the Armistice in 1918, when all the bells in the war-torn countries rang in the peace. They gave us a lift of the heart….to some hope of reunion, to others the sadness of no return.”

As a young choir-boy in the early 1960's, I well remember climbing up into the bell tower one evening before the start of evensong, and seeing the bells being rung by just one person at that time, if my memory is correct.

In 1965, after their periodic inspection , the bells were found to be in a perilous condition, and needed rehanging urgently, because of  the serious decay found in the supporting beams. Due to the high estimate for the work required to make the bells safe again, it was decided that the only viable option was to recast a much lighter peal of bells, using metal from the original peal. The reasoning for this decision was twofold; first the cost would be much less because the church would receive payment for the surplus metal, and second, a lighter weight peal would require less reconstruction work in the tower to take the strain of the bells. The old bells weighed three tons, and two tons were sold to the foundry in Whitechapel, who had cast them originally in 1876 and who were given the job of recasting the remaining one ton of metal into a new lighter peal  of eight bells. They were dedicated at a service on 16th November 1969.

Sadly, St Paul's closed it's door to the public for the last time in 1998, and the bells became silent forever.

To finish this article I would like to quote an extract from the St Paul's Centenary Book, written in 1946 which I think sums up the work of the bell ringers of St Pauls:
There is a tendency to take the bell ringers for granted, and they seldom get the appreciation they deserve, so when we hear the bells merrily ringing out their message and inviting people to worship , let us gratefully remember that high up in the tower are eight men and boys , with coats off and sleeves rolled up, working silently while the bells are ringing. We may give the message of the bells in Tennyson's words -

More details about my time as a choirboy at St Pauls, and its ultimate closure can be found by clicking here

I am grateful to Terry Hanson, for allowing me use some details from his book
“Denholme, the Village, the People and the Minster in the Hills”, to write this article.
Email ThisBlogThis!Share to TwitterShare to FacebookShare to Pinterest

Hello I am interested in purchasing a copy of the St Paul's Centenary Book you have mentioned in your blog.
My birth mother evelyn procter lived at Fairfield Denholme along with Tom and Jane Procter circa 1920s - 1940s.
Tom died in 1940 while living in Denholme and Evelyn died in 1951 in another part of Bradford when I was 2 years old. Tom and Evelyn are both buried in the same grave at ST Paul's Church graveyard. A s I never knew my kother I have been trying to locate any information I can about her via genealogy web sites but have been unable to find a birth date for her and place of birth. I would love to know of her time spent in Denholme such as school atended etc. I managed to get a copy of Tom's death certificate which listed his occupation as a lorry driver for a worsted spinners. I would be very grateful if you could help me with my above request. Thank you.

Hi
I have not received your e-mail.
I can let you have Terry Hanson's postal address if you e-mail me on my private e-mail address which is:

Unfortunately, Terry is not on e-mail.