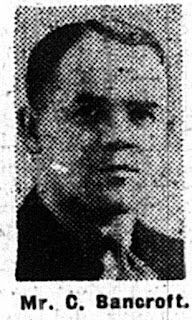 It is very unusual to come across two brothers in the same family who received honours for their work in the WW2 Armaments Industry, but here is the story of two brothers, Tom and Clifford, who did just that.
I wrote an article some time ago about Tom Bancroft, who received the O.B.E for his work as manager of an aircraft factory at Sherburn-in-Elmet, which was responsible for producing the Swordfish aircraft in WW2, a plane which, although quite old in design by then, nevertheless was very important to the war effort, and was partly responsible for sinking the German Ship ‘Bismark’. His story can be read here.
His younger brother Clifford, followed a similar career to Tom and was awarded the British Empire Medal [B.E.M] for his work at a Midlands plane factory during WW2.

Clifford was born in Denholme, near Bradford on 20th June 1899 at 6 Old Road, a small terrace house in the village. He was one of a family of five children to John Bancroft and his wife Alice. John was an Overlooker in Denholme at Foster’s Mill where most of the people in the village worked, and the following 1911 census shows the whole family living at that address.

Like most men of his generation, Clifford signed up for WW1, although he expressed a preference for the RAF rather than the Army,which must have been an unusual event in 1918, and probably shows his interest in aviation at this early stage in his life. His attestation papers show the date he signed up as 14 April 1918 at the age of 18 yrs/295 days, and gives his occupation as ‘fitter', probably working at Foster’s Mill where his father and brother also worked. His RAF joining papers give further details. Like many attestation papers of the time, Clifford’s are slightly fire and water damaged because in 1940 a German Bomber struck the War office in London where many of the records were kept. 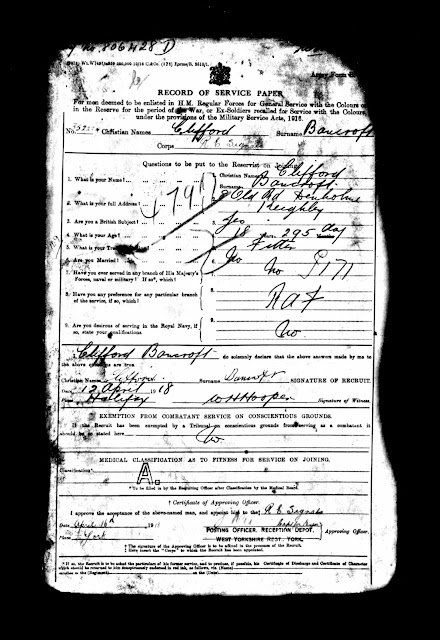 After the war Clifford maintained a keen interest in Civil Aviation, and whilst holding the position of Chief Engineer with Imperial Airways he was sent to Papua New Guinea and set up an Aviation Service for the Gold Industry…. the first plane ever to be used in the country. The plane was used to carry the gold from the mines in the interior of the country to the port on the coast. Here is a picture of Clifford with a plane at the Salamoa Aerodrome outside the Plane Hanger, which was made of bamboo!


Going back in time to the outbreak of WW2 Clifford was working for the Aircraft Industry in Lancashire, probably with help from his brother Tom who worked there, before being transferred to their Midlands factory as the Manager. The local newspaper when reporting his B.E.M. award said “ his guidance and consistent encouragement to the employees was quickly reflected in increased production….and for his assisting to bring record production at the Midlands Aircraft Factory he has been awarded the British Empire Medal”


I have no details about Clifford’s life after WW2, other than the fact that he died at Worthing in East Sussex in 1975.
Email ThisBlogThis!Share to TwitterShare to FacebookShare to Pinterest