It had been a long time since I visited the family grave where my Great-Grandparents are buried, so with a few hours to spare, I decided to go to Mount Zion Chapel at Ovenden, near Halifax and tidy it up. The sight that met me nearly made me turn round and go home! First of all, although the graveyard paths are well maintained and regularly trimmed, the areas around the graves are left to grown, and I could not even find our grave! I lost my bearings as well, because last time I was there, there was a tree  growing next to the grave, but this had now been cut down, and the site that greeted me can be seen in the picture on the left.

Anyway, after a few hours of sweat and toil I managed to get rid of all the growth hiding everything, and left the grave in a condition my Great-Grandparents would have proud of.

The grave contains my ancestors Timothy and Jane Bancroft [nee Greenwood], together with their eldest son Greenwood, and it was originally discovered by our family about 25 years ago after the death of my Grandmother, when we went through some old paperwork she had left. Amongst her collection of papers and photos was a memorial card to commemorate the life of her husband, John’s father, Timothy Bancroft, who died in 1900 and was buried here at Mount Zion Baptist Chapel.
Up until then I had never really thought much about my ancestors because as a family this was something that we never really talked about much.
It was this one item, the memorial card, that started me on my quest for family research and from the details we soon was able to find the long forgotten family grave at Mount Zion, which was found after several searches in a very overgrown corner of this very overgrown graveyard.

Timothy was born 5th March 1841 at Warley, near Halifax and baptised at Haworth Parish Church on 13th November 1842 by the famous local minister Reverend Patrick Bronte. His parents, Timothy and Sarah seem to have not bothered registering the birth, even though this was a legal requirement after 1837.
It is not clear why Timothy was born in Warley, or Luddenden Foot as listed on some census records, and yet baptised in Haworth twelve months later, but it seems likely that his father, was moving around with work, and moved back to the Haworth/ Keighley area shortly after Timothy’s birth.

Timothy, who was known as Timmy, was not the quiet unassuming farmer’s son you would expect, because on 8th May 1856, when he was just 15 years of age, he was in front of the local Magistrates on a charge of drunkenness in the village of Cullingworth near where he lived and was fined five shillings plus costs….or the alternative to this fine would have been to spend six hours in the stocks at Haworth!...the full story can be read here.http://bancroftsfromyorkshire.blogspot.co.uk/2009/05/timmy-bancrofts-narrow-escape-from.html
His first listing in the local census records as head of household was in 1871 at Dole Farm, Back Denholme, and is listed as a Farmer with wife Jane, his widowed mother Sarah, and unmarried brother Michael.
Previously he had been described as a “Delver” [Stone Quarry worker] when listed in the 1861 census, working for his father, together with his four other brothers.
It is not known when the family moved into Dole Farm which consisted of about 21 acres, but it must have been between 1861, when the farm was listed as uninhabited on the census, and 1869 when Timothy’s father died at the farm.

He had married Jane Greenwood at Bradford Parish Church on 25th July 1870.
The Marriage certificate shows Jane, as having to put a mark where the signature would normally be, which points to the fact that she must have been unable to read or write. Timothy was able to sign his name.


It seems clear that Timothy never strayed far in his early life because his future wife, Jane, was the daughter of John and Hannah Greenwood who lived at the adjoining farm at Bradshaw Head, between Far Oxenhope and Denholme.

Shortly after the marriage Jane had their first child, Fred, but he died in infancy and was buried at Horkinstone Baptist Chapel, Far Oxenhope on 14th November 1971, in a grave next to Jane’s parents grave.

By 1881 Timothy had moved with his wife and three children. Greenwood b1875, Sarah Hannah b 1878 and John b 1880 to Intake Farm, Manywells, Cullingworth. It must have been very difficult to sustain a living for him and his family at Intake Farm as it consisted of only thirteen and a half acres which is probably why the family moved again before 1891 to take on the tenancy at Nettle Hall Farm, Thornton, a larger farm of 30 acres.

Timothy continued to live at Nettle Hall until his death on 5th May 1900, the cause of death was listed on his death certificate as heart failure.

It is unclear as to why he was buried at the Mount Zion Baptist Chapel at Ovenden, as this is some distance from the home and it is highly unlikely that Timothy was a follower of the Baptist faith. It is known that the undertaker they used, resided in a village half way between Nettle Hall Farm and the Chapel, so this is the most likely reason why he ended his days there.

His wife Jane, and later son Greenwood were also buried in the same family grave at Ovenden.

As was common practice in those days, their son Greenwood had been given his mother’s maiden name. He led a quiet life running the farm with his brother John, after their parents deaths. He died in 1922 at the young age of 47 years from acute appendicitis because the condition went undetected, as it later came to light that his appendix were on the wrong side of his body to normal, thus causing the condition to go undiagnosed until it was too late.

The only picture of Jane which I have is the following one, showing her in later life with her son John, probably taken around 1900, around the time of Timothy’s death. no pictures of Timothy exist. 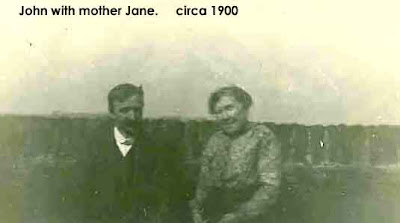 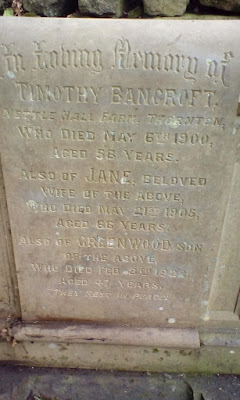 In loving memory of
TIMOTHY BANCROFT
Nettle Hall Farm,Thornton
Who died May 6th 1900
age 58 years
also of JANE, beloved
wife of the above,
who died may 21st 1905
age 66 years
also of GREENWOOD, son
of the above
who died Feb 8th 1922
aged 47 years
“They rest in peace”
Email ThisBlogThis!Share to TwitterShare to FacebookShare to Pinterest