Farming in Yorkshire from the 1920's

Whilst going through some old family photos left by my Grandmother, Hettie Bancroft, who together with my Grandfather John ran a mixed farm, known as " Nettle Hall" near Thornton in Bradford West Yorkshire I was struck by how much farming practices have changed since the 1920’s when most of these wonderful photos were taken.

Looking at haymaking in the 1920’s these pictures show how things have changed. Seen here are scenes of men and women gathering up all the loose hay with wooden rakes, before it was put on the cart to transport back to the barn for storage through the winter to feed livestock. The picture of all the family, with John on the top of the hay cart, plus helpers, and with the ever trusty cart-horse ready to pull it away, shows how things have changed. Today this work would be done by one man driving a tractor and bailing machine and another following on behind to scoop up the bails onto a trailer. 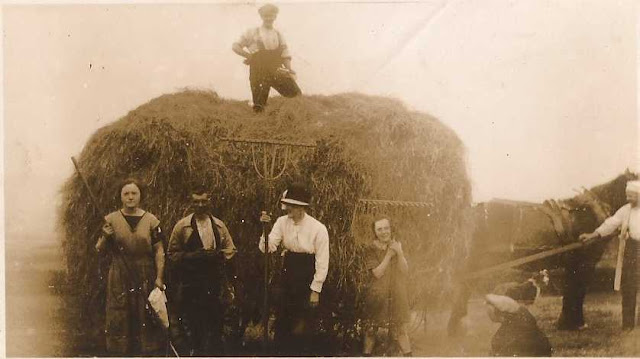 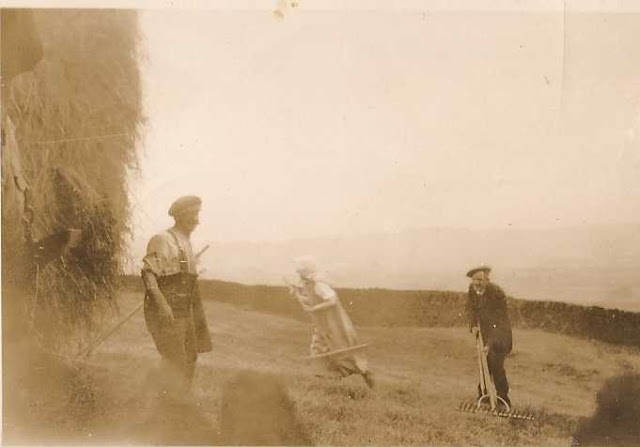 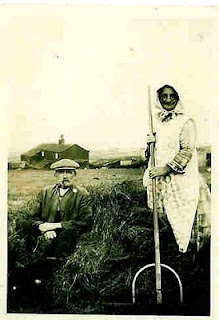 And another picture of them in the field racking up the loose hay, the men wearing their flat caps, even though it must have been fairly strenuous work on a hot summer's day.

Then a picture of my Great-Grandparents, Lister and Jane Watson, who lived on the next farm, having a little rest, no doubt before the hay-cart came back again for another load. A contented scene, Lister with pipe in mouth resting on a hay pile, Jane with a wooden rake in hand and a scarf on her head to protect her from the sun. Just visible are the steel toe-caps of his clogs. 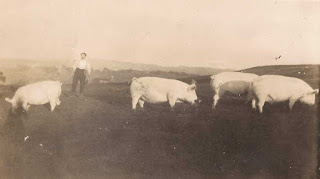 Being a mixed farm, they also had quite a lot of pigs at one time, here is John out in the field with a few of them, in the days when pigs spent most of their life able to wander around outside unlike today when most are reared intensively in sheds. 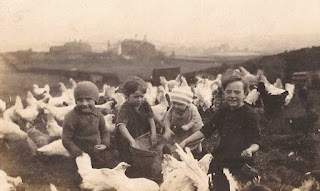 And of course the children also had their own daily chores, one of which was feeding all the hens, and collecting any eggs. Here they are, with my father as a child in the striped hat, outside, gathering all the hens together.Again, like the pigs shown above, these hens were able to wonder around the farmyard, able to scratch around in the earth, unlike today's hens, who at best probably spend all their lives in sheds, or even worse in cages. 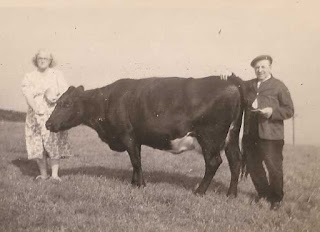 My Grandparents were always proud of the cattle they kept, both for beef and milk production, and here are of couple of pictures of then showing off the some of their dairy stock, always referred to as ‘Beast’ by them. I don’t know what breed these beasts are, but they don’t look like anything you see on a farm today!


From the 1920’s to the late 1950’s most work on the farm was done using heavy horses, and my grandparents always had a couple of heavy horses for this. Shown here is Hettie standing proudly holding the last of their farm horses. I will remember her talking about then, and calling them fondly by name. [One was called ‘Darling’, can’t remember the name of the other]. However the fateful day came when they were no longer needed due to the arrival of a tractor on the farm, and as no one wanted them, the only solution was to take them to be put down at the local Knacker’s Yard. Hettie said she could not bear to see them being led away for slaughter, so stayed in the farmhouse, hoping that they would not make any noise when being loaded into the wagon. Unfortunately one of them whinnied as it was loaded up, and she says she burst into tears and cried for a week afterwards! 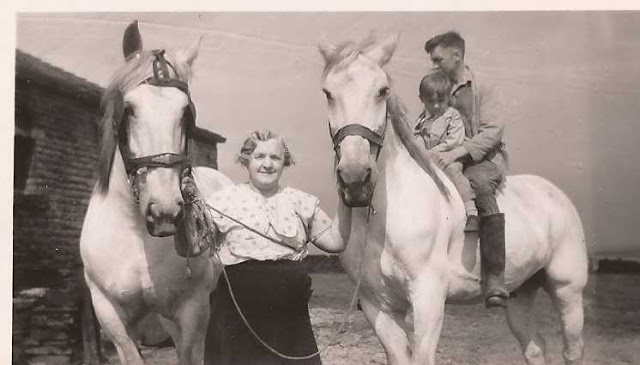 http://jarspoems.blogspot.co.uk/2009/01/old-ways.html
Email ThisBlogThis!Share to TwitterShare to FacebookShare to Pinterest