I have come across many poor individual Bancroft families who had fallen on hard time, sometimes of their own making and sometimes not, but here is a rather interesting story about one of them, who should have ended up in the workhouse, but for some reason seems to have managed to evade this fate

The document shown below is an order made in January 1839 by the Churchwardens and Overseers of the Poor for the Hipperholme & Brighouse district, to their opposite authority in the Keighley district seeking to have a young pregnant widow, described as a 'pauper' called Ann Bancroft and her eighteen month old child removed from their place of residence in Hipperholme and transported about 15 miles to Keighley, because the authorities were alleging that  she did not have a legal right of settlement to stay in Hipperholme, after the death of her husband William Bancroft in Elland, Halifax in 1838. 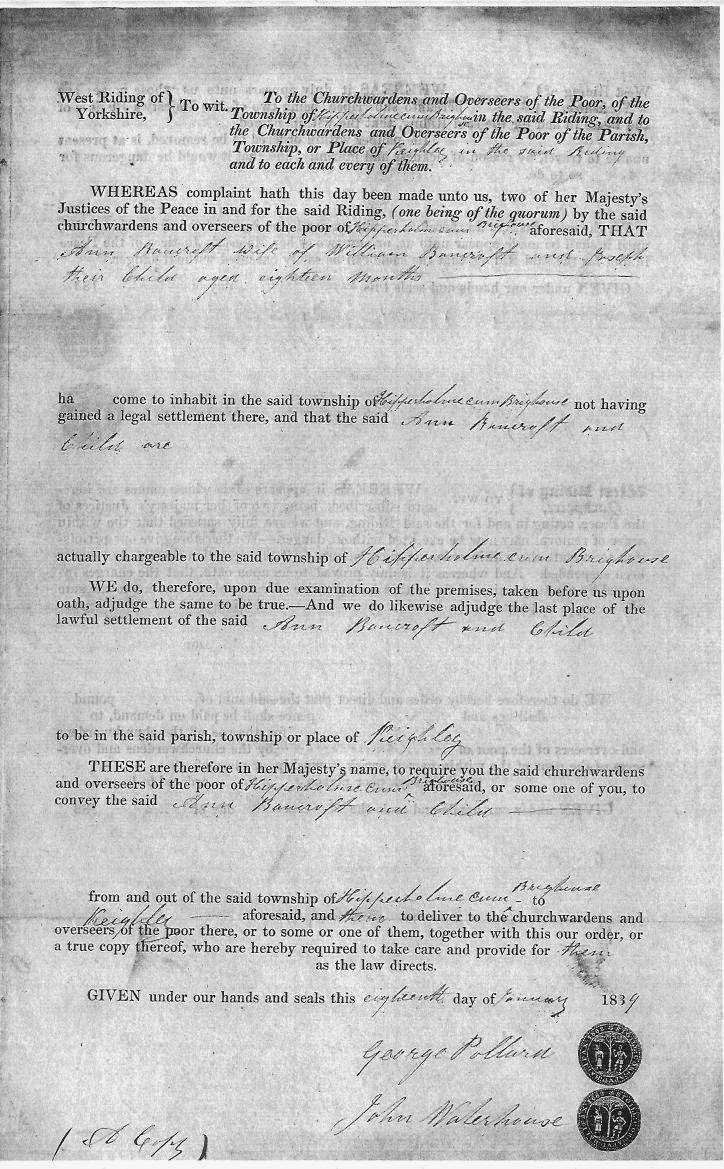 Ann was the daughter of Elijah and Elizabeth Kershaw, and was baptised around March 1812 at St John's Church, Halifax. She married William Bancroft on 13th April 1837 at Elland Parish Church near Halifax, and the Parish’s Register for their marriage listed them ‘both of this parish’, which is a highly important fact in this story.


It would seem that Ann was pregnant at the time of the marriage in 1837, because later that year her son Joseph was born, followed by a daughter Elizabeth, in early 1839, which was after her husband, William’s death, leaving her in a very difficult situation, and needing some financial assistance from the Authorities.

It may seem harsh by today’s standards that an individual who had done nothing wrong, other than having to ask for help from the authorities, could be transported back to their original place of birth because they were a burden on the local authority's purse, but in the 19th century this was quite often the case.
Ann fell foul of the 'Settlement and Removal Act' rules, which allowed the authorities to remove someone from their parish and send them back in the parish from where they came from previously, if they were unable to produce a 'Certificate of Settlement' to prove they had a right to stay in that particular district.
The 'Settlement and Removal Act', follows on from the 'Poor Relief Act' of 1662, the purpose of which was to establish the parish to which a person belonged [i.e. their place of 'settlement'], and hence clarify which parish was responsible for them, should they be in need of poor relief money. It was mandatory for each person to have a parish of settlement and to produce a settlement certificate to prove that they were a legitimate resident of that parish, otherwise they were liable to be moved back to the parish they had lived in previously.
To gain settlement status to a parish, a man had to meet one of the following conditions, and if these conditions were met, his family was also allowed to stay in the event of his death. The conditions were that he had to be either :
· Born in the parish.
· Have married in the parish
· Be hired for a year and a day within the parish
· Rent a property worth £10 per year, or pay the same in rent.
· Receive poor relief in that parish previously.
· Have a seven-year apprenticeship with a settled resident in the parish.

A person had to undergo a settlement examination by the overseers of the parish to obtain legal settlement in a new parish, before they could obtain poor relief, and if they were unsuccessful in obtaining this, the overseers could obtain a removal order to have them transferred back, by force if necessary, to their original parish of settlement. This must have been the situation Ann Bancroft found herself in. 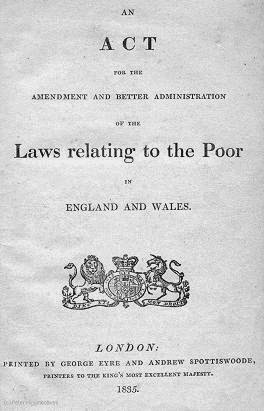 This sad story shows the struggle that some people had surviving during these hard times, and ended up being past from pillar to post, as parish authorities did what ever they could to rid themselves of so called “paupers”, who would be a burden and drain on their local poor relief funds.

The poor law was gradually altered, following the great reform act of 1834. The main difference was that the relief of the poor was changed from a local responsibility into a group one. Groups of parishes were consolidated into Poor Law Unions so removing the local community responsibility. Out relief was discouraged and the workhouses, which had been in existence for the previous two centuries, became the primary source of relief, and where many poor women with their children were placed.  Throughout the remainder of the 19th century the laws were tightened and modified until the administration was transferred to the Ministry of Health in 1918. It was not until 1930 that the poor laws were finally abolished.

Fortunately however, it would seem that  Ann’s removal did not take place, as the document shown below, dated July 1839, explains. Her husband William had died in 1838, leaving her with one small child and by this time probably nursing another new born child, which would appear to be the reason her removal seems to have been postponed from when it had been made in January 1839. 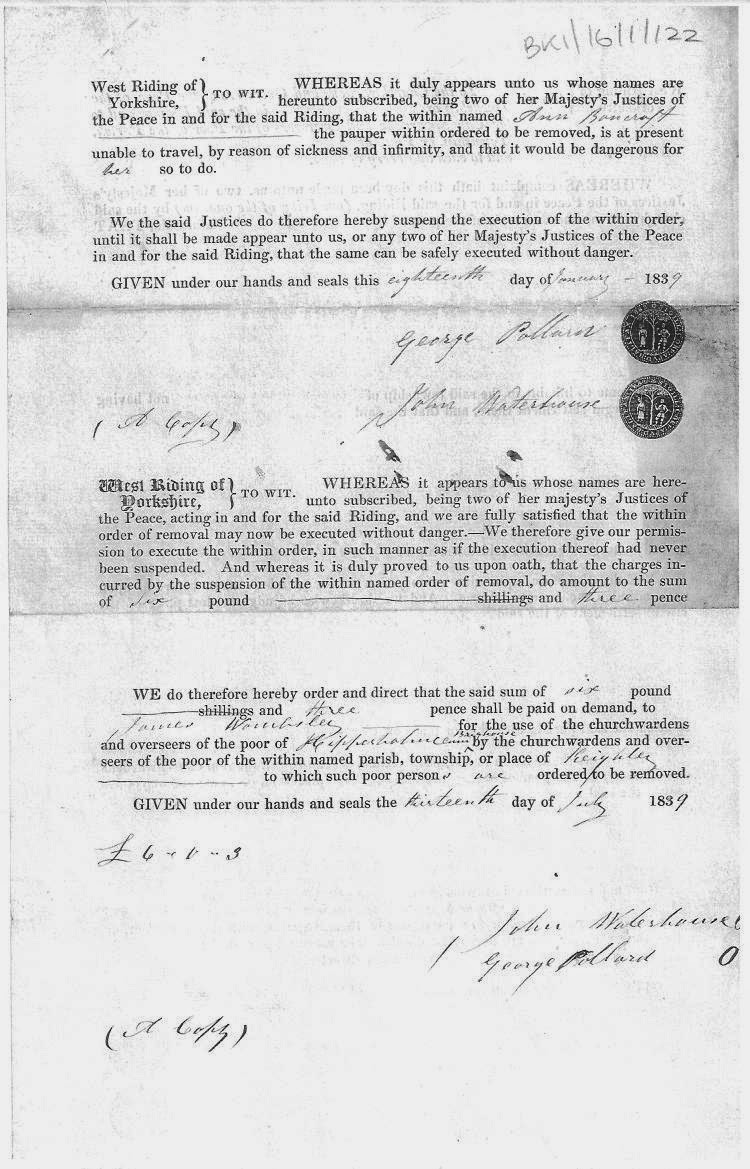 It would seem that the authorities were unsuccessful in their efforts to remove her from their parish because by the time of the 1841 census, Ann Bancroft is living as a widow, and without an occupation, with her widowed mother's family at Hove Edge near Hipperholme. Her 2 small children are with her, and  youngest child, Elizabeth age 2 years, was listed on the next page of the census.

Strangely, her two children were not baptised until they were 3-4 years of age on 26th December 1842 at the church in Lightcliffe, near where the family were living at Hove Edge Hipperholme. The church records show the children's parents as William and Ann, making it look as though William was still alive, even though he died in 1838, and is not shown on either the 1841 or 1851 censuses, where Ann is listed as a widow! She continues to live at Hove Edge, near Hipperholme, and 1861 census shows her still living as a widow with her mother Elizabeth Kershaw, and with the occupation of a 'card setter' and an original place of birth on this occasion listed as as Lindley, a village nearby. It therefore seems that all the attempts to have her removed must have been unsuccessful.

Another interesting question arises from the 1861 census.....the listing of Maria Bancroft born circa 1832 and listed as a granddaughter to Ann's mother, who is the head of household. On the previous 1851 census, Maria is listed as a 49 year old daughter to Ann's mother....although it seems clear that the enumerator who write the details down, could not make his mind up due to all the alterations to the record! It looks as though Maria was probably Ann's illegitimate daughter from a relationship before her short lived marriage.
Ann died in 1869 in the Halifax area at the age of only 58 years.


All this leaves several unanswered questions:
1- Why were the authorities trying to have her relocated to Keighley in the first place?...as on the various records she is listed as being from at least four different surrounding areas of Lindley, Elland, Lightcliffe and Brighouse, with no record of her, or her husband William ever coming from Keighley in the first place!...maybe she was trying to confuse them as to her origins by giving so many different areas!

2- Why does the children's baptism records list her husband as though he was still alive....did someone else stand in as her 'husband' at the church, to give her a 'respectable' image, or was this just a clerical mistake by the minister?

If anyone can offer any further information on this story, please let me know.
Email ThisBlogThis!Share to TwitterShare to FacebookShare to Pinterest