As a postscript to the recent article about Fred Bancroft and the 'Bradford Pals', which can be read by clicking here, I was recently invited to the 98th Anniversary Commemoration Ceremony of the 'Pals' on 1st July at the Cenotaph in Bradford. 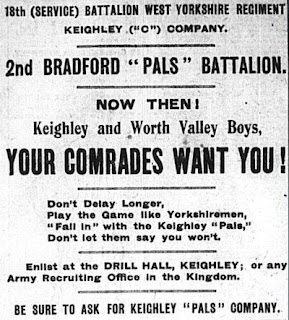 Shown alongside is a recruitment poster, on display in the Keighley area for the Bradford Pals 'C' Company urging men to 'Play the game like Yorkshiremen' and  ' Don't let then say you won't'


1st July 1916 was the date for the commencement of Battle of the Somme, near Serre in France, which was the worst date in the whole of WW1 for casualties, and the young men from Bradford who fell at the Battle of the Somme were remembered at this city centre memorial service.

Soldiers of the Bradford Pals, and other men of the West Yorkshire Regiment killed on the first day of the battle in 1916, were remembered in the poignant annual commemoration.

The Lord Mayor of Bradford, was among dignitaries who turned out to pay respects to those who gave their lives in the battle. He spoke about the parents of soldiers who would have been at home, dreading a knock at the door with a telegram telling them their son had been killed, and said: "I was honoured to take part in the service this morning to recognise the sacrifice made by the Bradford Pals all those years ago, back in 1916, and to honour all of the men and women who have served in the armed forces."

There were also prayers by the Lord Mayor's Chaplain, and reflections by the Dean of Bradford, The Very Reverend Jerry Lepine, as well as contributions from the Bradford World War I Group and The Great War Society.

Also present were men dressed in military uniform of the time. 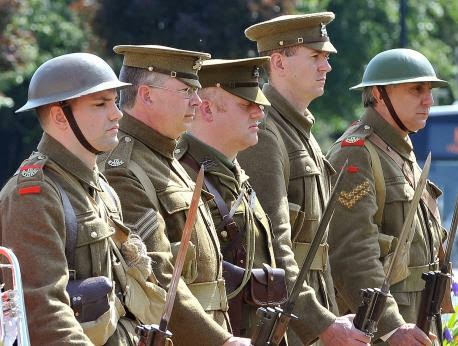 West Yorkshire Regiments took part in action on 1st July 1916, the first day of the Battle of the Somme, when 2,000 young men from Bradford left their trenches and by the end of the first hour 1,770 of them had either been killed or injured.

The Battle of the Somme continued until November 18th 1916, on both sides of the River Somme in France.
In total, more than 1,000,000 men were wounded or killed, making this one of history's bloodiest battles.