I recently met someone who commented on my Yorkshire accent, and as I  have never thought that I have a strong accent said to them “ If you think my accent is strong, you should have heard my Grandparents talking!”

This got me thinking about the old Yorkshire dialect, and how it has largely disappeared from modern day life.


It is often referred to as broad Yorkshire or Tyke, not to be confused with modern day slang.


Here are some memories of my Grandparents, John and Hettie Bancroft, who were farmers in Thornton near Bradford, and who  all their life spoke using quite a strong dialect, with words and phrases that you never hear nowadays. As a young child in the 1950’s I remember them using some of the following words and phrases to describe things in everyday life:

“Tha’s cack-handed!” when they saw me trying to use a hammer with my left hand, instead of trying to be right-handed.

“ Is te’ starved?” when they were trying to find out if I was cold….I thought they were asking if I was hungry!

“Fetch coyl in from’t coyl hoyl”….bring some coal in from the coalhouse.

Some of the other words and phrases I remember them saying were:

Allus - always
Appen  -  maybe
Aye – maybe
Aye up - hello
Backend’ish – autumn time
Bahn - going
Bah't - without
Be reight – it’ll be alright
Brass – money
Braying – beating
Clout – slap
Coit – coat
Fair ‘t middlin – somewhere in the middle
Fettle – mend
Fowk – folk/people
Ginnel – alleyway
Flittin’ – moving house
Lakin' - playing
Tha'mun - you must
No'but - nothing but
Ow do – how are you
Seethe – do you see
Summat – something
Watter – water
Wick - lively
Yonder – over there
When Hettie announced to her parents in her broad Yorkshire dialect “ am bahn wed John from’t Nettle Oil” [I am going to marry John from the Nettle Hole], all her parents, who did not approve of the marriage, had to say on the matter was “ Tha’s med thi’ bed, nah thi’ can lig on it!” [you have made your bed, now you can lay on it!]. However Hettie, having reached the age of 21 years, did not need their approval, so the wedding went ahead.

And a few of their phrases I remember were:

Put wood in’t hoyl – shut the door
Side t’ pots – clear the table
Appy as a pig in muck – very happy
Nother use nor orniment – useless
Were ya born in a barn? – close the door
Stop lakin' a'bart - stop messing about 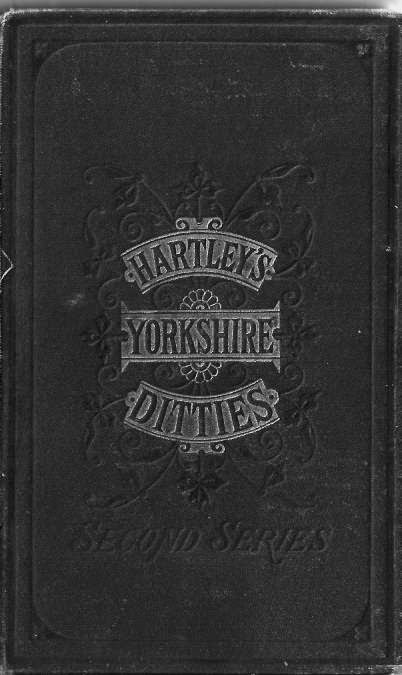 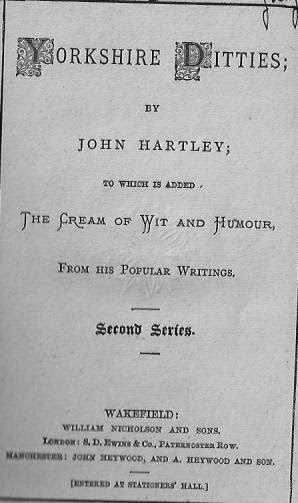 My grandmother was very fond of a Yorkshire poet called John Hartley [1839-1915], who was from Halifax, and was famous for writing verse in Yorkshire dialect. She left me a book of his most famous poems. Here is one of my favorites…you might have to read it a few times before fully understanding it, as I did….[my computer’s spellchecker just gave up trying to understand it!]

When aw wor a lad, lads wor lads, tha knows then,
But nahdays they owt to be ‘shamed o’ thersen,
For they smook, an’ they drink, an’ get other bad ways,
Things wor different once i’ thi gronfayther’s days.

Aw remember th’ furst day aw went a coortin’ a bit,
An’ walked aght thi gronny, awst niver forget,
For we blushed wol us faces wor all in a blaze,
It wor nooa sin to blush i’ thi’ gronfayther’s days

And to finish off on a lighter note, here is the verse most Yorkshire folk are familiar with.
The Yorkshireman's Motto [with translation!]

Do you have memories of family members using the Yorkshire dialect?.... if so please share them in the comments section below.
Email ThisBlogThis!Share to TwitterShare to FacebookShare to Pinterest