Here is an interesting article to coincide with Remembrance Day later this month, describing an act of great bravery by Fred Bancroft of Silsden during WW1.

Fred Bancroft,was born in 1896 at Ickornshaw, a small Hamlet near the village of Cowling, and was part of a large family of 15 children of John Henry and Agnes Bancroft. I wrote an article previously about how this family managed to live in very poor conditions in a very dilapidated house, which can be read by clicking here. Because of these poor living conditions, the family moved to Silsden, near Keighley when Fred was a small boy.

Fred was a Dyer's Labourer at the Silden Dyeworks, and at the outbreak of war enlisted in January 1916 in the West Riding Regiment, no doubt encouraged to join up by the Government's recruitment campaign lead, by Lord Kitchener, and he went out to France in March of that year. He won the Military Medal, and the background to this was reported in  the Keighley News in September 1917, telling the following story:
'Private Fred Bancroft, one of four soldiers on Mr. and Mrs. JH Bancroft, 11 Walker’s Place, Silsden, has been awarded the Military Medal for gallantry and devotion to duty whilst in action. The deed for which Private Bancroft gained the coveted honour is described by his Commanding Office [ C.E.M. Logan] as follows:-  On the 25th of August 1917, a small party of the 24th Labour Co. was proceeding on the railway at  [blanked out at the time for security reasons] when the enemy’s shelling became very heavy. One shell exploded near the party and mortally wounded one of his comrades. The rest of the party ran for cover except Private Bancroft, who remained very cool and collected. In spite of the continued shelling, which was very severe, he proceeded along the rail track to obtain a stretcher, and returned with another man to help carry his comrade to the dressing station. Unfortunately the man died, five minutes after being admitted, or Private Bancroft would undoubtedly have saved his life, as shells continued to fall round the place where he was lying helpless’
'Private Bancroft has also received written congratulations from other officers in respect to his gallantry. On September 8th, the company to which he is attached went on parade when his Commanding Officer pinned the ribbon on his breast. He will receive the medal later. Private Bancroft, who is 21 years of age, is attached to the Labour Co., West Riding Regiment. He enlisted in January 1916, and went out to France towards the end of March the same year.'


The Keighley News commented on him again  in the following year, with a photograph, saying he had been  wounded at the Battle of the Somme. As is well known, the Battle of the Somme was one of the most infamous episodes in the whole of WW1, where more than 1 million men were injured or lost ;there lives. The newspaper report stated:
'During the battle of the Somme he was engaged on work near the front line for a considerable time and was later wounded. By October 1918 he was still convalescing in Ripon Convalescent Hospital.'

After his convalescence, Fred went back home to Silsden, and married Mary Ann Dean at Silsden Parish Church on 25th November 1919.

Fred was one of five brothers who took part in WW1. The tragic story of the whole family can be read by clicking here. 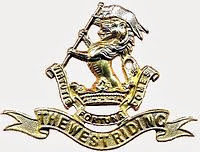 The Military Medal was first established on 25th March 1916 and was awarded to personnel of the British Army, and other forces, for bravery in battle on land. The inscription on the reverse of the medal says "FOR BRAVERY IN THE FIELD". It was only discontinued relatively recently in 1993. Anyone awarded this, was allowed to use the letters 'MM' after their name.

Also shown above is a hat badge from the West Riding Regiment in which Fred Bancroft served, and which can be seen on the photograph of him at the top of the page.