For many years I struggled to find the location of the house where my G/G/G/Grandparents Joseph and Nellie Bancroft lived in the late 18th and early 19th century called ‘Hole House’, which was listed in parish records as being somewhere in  the Keighley Parish area.

Joseph had been baptised 31/5/1755 at Haworth Church and is listed as being from Far Oxenhope on the parish record. He married twice, first to Judith Smith, in 1784 at Bradford Church, and at which time he was living at Leeming, Far Oxenhope, where their four sons, William b1784, Abraham b 1785, Joseph b 1787 and Jabez b 1789 were then all born. He was a weaver by trade, probably working at home with a handloom, as was a common occupation in the area at this time, and possible did a little farming to help sustain his family.

Shortly after the his fourth son, Jabez, was born in 1789, his wife Judith died at Far Oxenhope of what was described of “ the gripes” which was a bowel complaint, when only 35 years old. 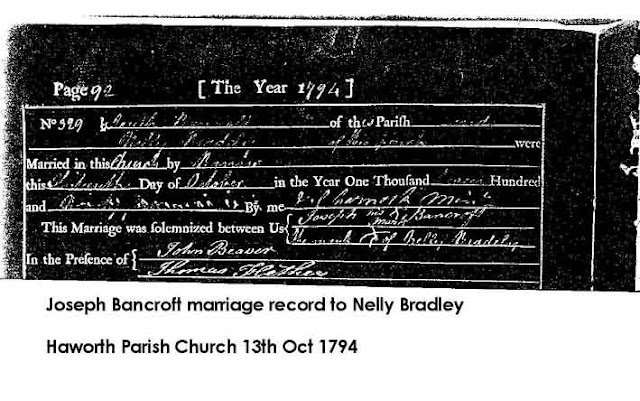 He then married again on 13/101794 to Ellen Bradley, known as Nelly [daughter of John Bradley], at Haworth church. Both are listed “of this parish” on the parish record and both left there marked cross on the parish register, as can be seen on the above picture.

Joseph and Nelly then moved away from Oxenhope and set up home at  Hole House, Oakworth,  in the Keighley Parish, probably in connection with his skill as a weaver, as there were several new woollen and cotton mills springing up in the vicinity which would have provided plenty of opportunities for employment, as handloom weavers had started to move from their cottage industry at home to the new mechanised mills The nearest mill being Vale Mill, which was in the valley just a few hundred yards below Hole House, had been newly opened in 1785, and due to its size would have been heavily recruiting workers such as Joseph, who had a skill such as weaving.

Nelly died in 1828 aged only 58 years.....no doubt the fact that she had eleven children in sixteen years,had something to do with this.

Joseph died 10/4/1838 at the home of his son Mathew at Harden Heights, which is about 5 miles away from Hole House. His death certificate, denotes the fact that he was a very old man for the times, because it lists him as a weaver of 83 and three quarter years old, and the cause of death is listed as “old age”!!

Rev'd Patrick Bronte buried both Joseph and Nelly at Haworth Church, but there are no gravestones to commemorate this.

Now to the story about the reason why I could never find Hole House in my  early research........All Joseph’s fifteen children, from both marriages, were baptised at Haworth Parish Church with the exception of one daughter Betty, who for some reason which I have not been able to clarify, was baptised in 1799 at Keighley Parish Church. Over the years I have found all the Haworth baptism records for their children, and they all list the area where Joseph and Nellie were living as either ‘Hole House’ or ‘Hoil House’, and I accepted this variation because the way the word ‘hole’ was pronounced in olden times, using the Yorkshire dialect, was either  ‘hoil’ or ‘oil’. It was only when I found the entry for  their only child who was not baptised at Haworth... daughter Betty, who the Keighley Parish Church records described as being born at ‘Hoyle House’ that everything fitted into place!

Hoyle House is a small row of cottages, in the village of Oakworth near Keighley still there today...I had never realised that Hole House was in fact today known as  Hoyle House!....and is less than a mile from where I live!

So here is my theory about all this…. It seems likely that Joseph and Nelly was not able to read and write very well...if at all, and this is confirmed by the fact that both just made their mark on their marriage record, shown above, rather than signing their names. They would probably not have been able to write their address down, or read what had been written, and so when asked by the vicar where they lived, would have said ‘Hoyle House’.The vicar, or whoever had the task of making the entry in the parish record,  probably made the assumption when taking their local accent into account….ah yes, they means Hole House.

Just why or when 'Hole House' became renamed as ' Hoyle House' is unclear...maybe the map makers were so fed up of everyone calling it 'Hoyle House' they decided to just go with that! The name  however had certainly changed by the time the above map was produced around 1900.

Great research as always...carry on the good work!