Many of our Bancroft ancestors, who were living in the towns of  West Yorkshire in the 19th century, earned a living as woolsorters in the textile trade. The skill of the woolsorter was to identified the correct quality of fleece for a specific cloth. This was essential to ensure top quality fabrics and required a high level of skill. The woolsorter worked at a bench incorporating a wire grill on which the fleece was unrolled. Badly soiled parts were discarded, and then the fleece was sorted by sight and touch into wool of the various qualities found in the different parts of each fleeces.

It was a highly skilled job requiring a seven year apprenticeship and was a much sort after job, because of the relatively high wage, when compared to other work within the textile industry, and because of this many men were tempted by job offers abroad, as the following poster from 1855 shows. 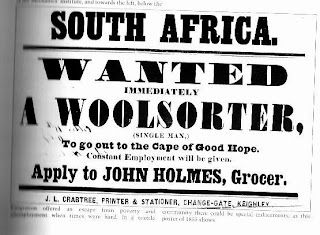 The West Riding of Yorkshire’s phenomenal growth during the 19th century was founded on the Wool Industry….925 factories employed woolsorters ...a total of about 25,000 individuals ....45,000 in Bradford alone....but this  industry had a dark side….alongside bad working conditions and poverty, a deadly disease awaited some woolsorters. Their job was far from a safe occupation for many…..read on for the full story.

Many West Yorkshire Mill owners, particularly in Bradford, started producing textile material from the early 19th century, based on new wools from overseas such as alpaca and mohair.  These bales of wool were often contaminated with blood or skin and sometimes contained the anthrax bacillus.  Workers quickly made the link between these wools with  “bronchitis, pneumonia, and so-called blood-poisoning of a peculiar deadly nature which created open sores on the skin and a painful sudden decline in the victim.  Workers who sorted the bales when they arrived in the mill, were most vulnerable to what became known as the “woolsorters’ disease”, or “la maladie de Bradford”, though other cases of people who had do direct contact with the raw wool were recorded, for example a woman, who washed her husband’s contaminated clothes, or a boy who feel asleep on a bale of wool.  Death could result within a day or so, accompanied by terrible pain.


In the early part of the nineteenth century the celebrated “father of British occupational medicine”, Charles Turner Thackrah, an acknowledged expert on industrial diseases, noted in 1831 that 'woolsorters are occasionally annoyed with dust from the lime, which in some kinds of wool is employed for separating the fleece from the skin, with no sensible effect is produced on health. There was thus no perceived risk which attended the job of woolsorting'.... at least as far as Thackrah was concerned!...His view of the situation is understandable, bearing in mind that this was the first signs of the troubles ahead for the industry. Thackrah himself was to died two years later in 1833, from tuberculosis, another disease of the lungs.

Over the following twenty years, however, merchants and manufacturers in Bradford began to make far more extensive use of ever-more-readily available imported fleeces, whose long fibres made for a high-quality end product.

The first reported case of the woolsorter’s disease had been officially reported in Bradford in 1834, but it was however much later, when a letter appeared in the Bradford Observer newspaper in 1878 which provoked local correspondence into action, resulting in a campaign for better understanding, when it reported that three woolsorters within a month ‘had died from blood poisoning contracted in the same shed of the same factory’

One of the main suspect raw materials in the mid-nineteenth century was mohair from Turkey. The increase in the scale on which such materials were used in Bradford’s wool trade coincided almost exactly with the supposition amongst operatives that these foreign fleeces were  responsible for causing a peculiarly fatal condition amongst woolsorters. One of the earliest recorded cases came in 1855, when Dr Samuel Lodge Jnr, a local medical practitioner performed an autopsy on a woolsorter who had died following respiratory complaints. Lodge surmised that death was due to the build-up of dust, hair and lime in the lungs, and recommended the use of respirators by the men, and chlorination of the air in order to dissipate and neutralise any disease-causing miasmas. Respirators proved an unpopular items for the workers to use, as many workers were still not convinced that the disease was linked to the wool they were working with, so they just carried on regardless, with sometimes tragic consequences.

Eventually Two Bradford doctors played key roles in researching and removing the disease: Dr J.H. Bell, who established in 1879 that “woolsorters’ disease” was indeed anthrax, and Dr Fritz Eurich.  In his capacity as bacteriologist to the Bradford Anthrax Investigation Board, Dr Eurich spent many years of dangerous work, growing and experimenting on the bacillus.  Dr Bell described the problem as 'a formidable disease, and one which could be fatal to woolsorters, but which could be completely removed by simple means'. In his opinion the poisonous wools were alpaca, mohair, camel hair, perian and east indian materials which are classed as  'dry, dirty, low class wools'. and he initially found a method of killing the anthrax bacteria by firstly exposing the wool to fresh air for 24 hours after unpacking the bales, and then washing or steaming the wool at high temperature,which seemed to render it  safe to start handling. He later modified his views and decided that disinfecting  the fleeces, removing the danger without spoiling the fleece or harming the workers.

Many employers were initially reluctant to bring in changes to working practices, until a report in the British Medical Journal in 1880 reported that in the previous year, woolsorters at one mill in Bradford had gone on strike because their employer had refused to wash the wool before sorting, and another firm had given the excuse of being too busy to wash it. When it's workers had refused to handle it they were replaced and within a few days three out of the twenty replacement sorters were dead. It was also reported that at another mill three out of nine sorters died within a month.

An insight into the working conditions for woolsorters was given at an inquest on 19th June 1884 at Bradford into the death from woolsorter's disease of an employee of Mitchell Brothers Mill in Bowling, Bradford. When questioned, Mr A Mitchell, the owners, stated that in his sorting room,
'fourty sorters worked with a working space of twelve feet per man. The carrying out of the regulation of sweeping the room daily was left to the men, as the firm thought it was best to do so, but some of the men did not comply with this regulation. There was also no need for sorters to take their meals in the room, as other accommodation was provided....and hot and cold water was provided for washing purpose. The firm employed two hundred and seventy sorters on average, and had lost seven men from all causes in the last four years, four of them from woolsorters disease.'

The recommendations from the inquest were as follows:
1- The floor of the sorting room should be sprinkled and swept daily, after the work is finished and not while any sorters are in the room.
2- The walls should be whitewashed half yearly and disinfected once a year.
3- Dust from the wool should be extracted by fans in all sorting rooms, and must not be discharged into open air but into properly constructed boxes.
4- Each sorting board should have independently constructed with an extractor shaft in order that the dust arising from the material be drawn downwards, away from the sorter.
5- The dust collected, must be burned twice a week.
6- Floor sweepings, dead skin, scabs and clippings etc must be removed from the sorting room daily and disinfected before being dealt with.
7- A separate room should be provided for woolsorter's coats, and no meals should be taken into the sorting room.

Clearly this situation of so many workers dying of this disease could not be allowed to continue, and the consequences that  the disease could have for mill owners and their employees led to a set of regulations known as the Bradford Rules had been drawn up, which largely followed the recommendations of the inquest earlier that year, and from this time, local employers adhered voluntarily to the measures that centred upon practical safety measures. The rules were viewed to be of such importance that they were later adopted nationally. Today the threat of industrial anthrax is minimal in this country.

To finish the article, here is a short verse, written in a publication called 'The Yorkshirmen' in March 1878...probably by a woolsorter.