The disappearance of John Hiram Bancroft


Here is a rather intriguing story about a Bancroft individual , born and brought up in Leeds, Yorkshire, who suddenly disappeared, leaving his wife at home…. then turned up in South Africa…. then changed his name to cover his tracks and start a new life....then remarried, probably bigamously....and then going on to father a family of ten children!

Our story starts with John Hiram Bancroft who was the son of Joseph, a night watchman in a foundry, and Sarah [nee Briggs], and was one of their 9 children. He was born in Bramley near Leeds on 11th December 1856

John married Rhoda Blakey , the daughter of William Blakey, a tailor from Lower Wortley, Leeds on 5th October 1878 at the Parish Church in Leeds and on the marriage certificate was described as a ‘Hammer Man’ which was a hard manual job carried out in an iron foundry

The census of 1881 shows him and Rhoda living at Prince Street, Lower Wortley, Leeds and lists him as a 'Forgeman'. The couple were still in the same area in the following census of 1891, but were now living at Lower Wortley Road with Rhoda’s parents and still without any sign of children. By the time of the 1901 census however he had vanished. On the census of that year Rhoda had a choice of entering either single/married/widowed or divorced on the census form. She chose to enter ‘married’, and then crossed it out, as if she did not know what her status was…or maybe because she did not know where her husband had disappeared to!

His disappearance may, or may not, have something to do with an incident reported in the Leeds Times newspaper on 22nd July 1893, at a time when John Hiram was employed as the porter at Bramley Workhouse, near Leeds, with his wife Rhoda helping him to supervise. An inmate of the workhouse, called Thomas Walker, died through loss of blood from an ulcerated leg, after climbing back over the workhouse wall to get in, after having made an unreported and unsupervised visit to a local public house to fetch beer back. John Hiram was  the porter left in charge at the time, because the workhouse manager and other staff had gone out for the afternoon to a nearby park. At the inquest into this death he was questioned about the incident, after having found the inmate bleeding badly in a mistal within the workshop grounds. He said he took the inmate to the workhouse hospital and started to undress him, but within 10 minutes the inmate was dead. When questioned as to why he had not tried to stop the bleeding he stated " It's nothing to do with me...I know nothing of these things" and when the coroner told him he ought to have done something for the sake of humanity, his reply was " It's nothing in my line". The coroner in his summing up said " there was a total lack of prudence on the part of the porter, [John Hiram Bancroft], who's duties were certainly not to drag the man from the mistal to the hospital, and so accelerate death...he should have obtained medical treatment on the spot!...he seems to have regarded the matter very indifferently indeed!" The jury at the inquest reinforced this statement by expressing their opinion that the management of the workhouse " was not what it should be"
[ Life for any poor individual who had to live in a workhouse was extremely grim, and was meant to be so because the authorities generally tried to make sure that only the most needy were accommodated in a workhouse for as short a time as possible, and anyone who could exist in the outside world was encouraged to do so. I wrote an article about life in the Keighley workhouse which can be read by clicking here.]

Rhoda, his wife, did not have any children to her marriage to John Hiram, and never remarried. Sadly she seems to have continued to use the Bancroft surname, and continued to live with her parents at Lower Wortley, Leeds. The 1911 census still showed her as 'married for 32 years', and confirms that there were no children to the marriage. She died age 84 years in 1938.

There is some conjecture about how and when John Hiram arrived in South Africa. I did wonder if he got there as soldiers in the Boer War, and then stayed on after the war finished, but no records have been found to substantiate this and in any case it fairly certain that his family would have made a big thing of this if it had been true. The story told down the family generations is that he came from Ireland to help with the building of the first railway in South Africa, but this may well have been just another tale invented by him to throw the authorities off the scent of the past he had left behind in England. It is also possible that he just stowed-away illegally on a ship. We do know however that his marriage to Rosabella Kelly is officially recorded as 25th May1897. His name on the record is given as William John Bancroft at that time, but the actual record clearly shows that it was first written as John Bancroft, with the 'William' being added later. Was this the first stage of him changing his name slightly to throw anyone off the scent, if he was marrying bigamously?  His wife’s name was given as Rosabella Kelly…without the Catherine name.

The birth records of their first child also make interesting reading as it predated the marriage. This entry about the birth of their son, John Joseph Bancroft, where the parents are given as (once again) John Bancroft (no mention of William) and Rosabella Kelly. The birth-date of the child, John Joseph, is given as 11th November1896. The baptism took place a little more than 6 months later, on 24th May1897. Interesting  the remark in the baptismal register (in Latin), is that the child was born illegitimate but was made legitimate by the subsequent marriage of John (William) and Rosabella the following day!

The couple went on to have ten children in total….one of being named ‘Hiram’ which is another clue confirming the fact that John Hiram and William John are one and the same person.

John seems to have spent certainly the latter part of his working life with the Railway Company, as a ‘Ganger’ and when he retired in January 1924, the following internal letters are on file regarding this. 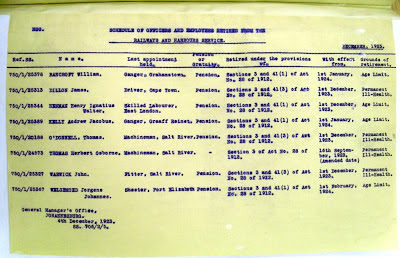 He died on 5th August 1926 at his home 1 Paradise Row, Grahamstown, Albany, Cape, leaving his wife and eight surviving children. His will, signed in Grahamstown on 24th August 1918, was filed on 24th August 1926 in the name of William John Bancroft which states that he left all his entire estate to his wife, Catherine Rosabella, and his estate was lists as follows:
Immovable Property valued at £230
Furniture valued at £100
Cash amounting to £1-19-00
Claims owing to the estate £124-17-10

Shown below is a copy of the South African death certificate, in the name of William John, and describing him as a Railway Pensioner. It lists his parents as Joseph and Sarah [born Briggs] which finally confirms the origins and identity of William John as John Hiram Bancroft 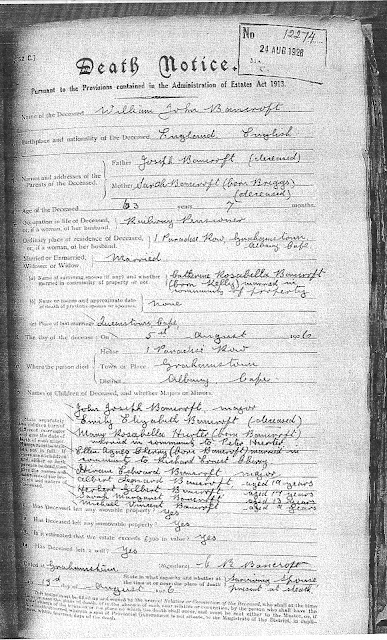 No photograph seems to exist for William John Bancroft or his wife, but with regards to Catherine Rosabella, her death notice states that she died on 9 Dec 1947 at the age of 71 years 6 months which gives her a birth date of June 1876. This gives her an age of 20years 11 months when she got married and not 23years as stated on the original marriage record. She was actually 19years 2 months old when their first child was born…..was she therefore underage at the time of her marriage?....which is probably another story!

If anyone knows anything about John Hiram Bancroft, [also known as William John Bancroft in South Africa], which might help to solve this mystery of why he suddenly disappeared from England, please leave a comment in the section on the bottom left of this page and I will reply.
Email ThisBlogThis!Share to TwitterShare to FacebookShare to Pinterest

There must be church records for WJ and Rosabella's family. Is there proof for 10 children? Is the one not found a male child? Thank you for your help. (William) John Hiram Bancroft is my 1cou3xr.

Hi Sharon,
I might be able to fill in a few blanks with your query. E-mail me for more information on: jbancroft1@btinternet.com