Diseases of the 19th Century 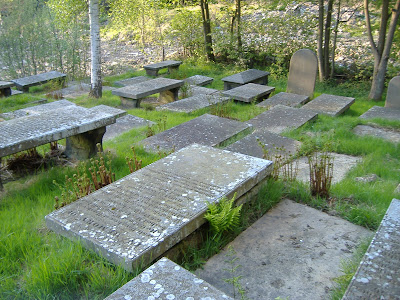 I was at a fundraising event recently for the Lowertown Old Burial Ground Trust in Oxenhope, and was reminded about one of their early newsletters which was produced some years ago and gave details about the tragic life of John & Mary Bancroft from Oxenhope, who lost four of their seven children at a very young age, as the following monumental inscription shows.

The family’s tabletop gravestone is in the Lowertown Old Burial Ground at Oxenhope. 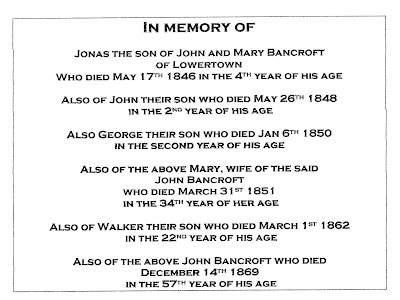 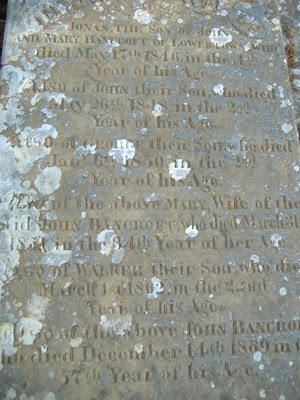 John Bancroft of Oxenhope married Mary Riley from Oldfield on 23rd July 1838 at the Parish Church in Bradford, and they then started their married life together in one of the cottages adjoining Charles Mill, where John was employed as a spinning overlooker.

They had seven children but none of them were baptised at Haworth Church, as would have been the usual practice in those days. Instead John & Mary took their surviving four children to the Wesleyan Chapel just across the way from Charles Mill at Lowertown and four were baptised together on 11th November 1847. The four children were Joseph b. 13th Oct 1838, Walker b. 26th May 1840, Susannah b. 13th May 1844 and John b. 7th Aug 1846. They’re later children George was baptised on 3rd Dec 1848 and their last child Jonas on 14th July 1850.
A previous child, also called Jonas, had died of the croup in his 4th year without being baptised. They were then to loose two further sons in infancy, John died 26th May 1848 in his 2nd year of “worm fever” which lasted for 2 months, and George died 6th Jan1850 also in his 2nd year from what was described as “teething, inflammation of the lungs and convulsions” which lasted for 3 weeks.

Mary, the mother of the above, died of “congestion of the lungs”, [also known as consumption or T.B.]. In her twelve years of marriage, in which she had seven children, she had to endure the heartbreak of seeing three of them die and possibly nursing a sick child, George, while she herself was suffering from illness and also while being pregnant with her last child, Jonas.

Eleven years later more tragedy struck the family when Walker, their second son, died at Charles Mill, where he worked as an engine tender. An enquiry was held on 3rd March 1862 by the Deputy coroner for Yorkshire, and the cause of death was given as “accidentally crushed, when working in a steam engine”. Walker had also previously been involved in earlier accident, when he lost his left hand, and this early photograph survives of him with his large cap strategically placed to hide his missing hand. 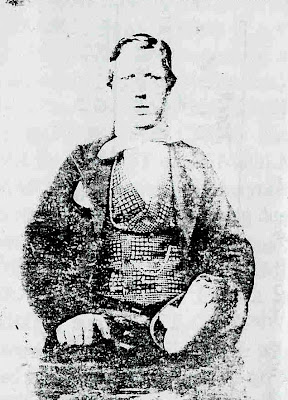 John, the father, who must have suffered greatly with the lost of his four sons and wife at an early age, died himself seven years later of a ‘chronic ulcer of the stomach’. His two surviving sons, Joseph & Jonas went on to inherit Charles Mill from an Uncle in 1870, and the family continued to run the mill for another hundred years.
The picture below shows Joseph in later life. 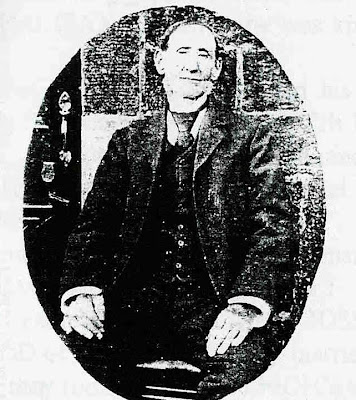 Here are some details from a 19th century medical book of the illnesses this family suffered from, and the proposed remedies….Thankfully, medical science has improved since those times!

Croup.
“This disease generally prevails in cold and wet seasons. It generally attacks children at night, after having been exposed to damp cold easterly winds through the day. Damp houses, wet feet, thin shoes, wet cloths or anything that obstructs perspiration, may occasion the croup. It is attended with a frequent pulse, quick and laborious breathing. Which is performed with a particular kind of croaking noise, which may be heard at a considerable distance. The voice is sharp and shrill, and the face is generally much flushed”.
The treatments includes:
“He should be made to breath over the steam of water and vinegar. The child may take frequently a tablespoon of the following julep… Take a pennyroyal water, three ounces syrup of althea, and of poppies each one ounce mix them together. Asafoetida is found to have a good effect in this case”.

Worm Fever
“ Those who eat great quantities of unripe fruit, or who live much on raw herbs and roots are generally subject to worms. Cures include Harrowgate water, which is excellent for expelling worms, the great bastard black hellebore, tansy, garlic, wormwood and rue are also effective. Anther remedy is to put white soap in their pottage”.

Teething, Inflammation and Convulsions
“ If the fever be high, bleeding will be necessary, but this in very young children ought always to be sparingly performed. When an inflammation appears, the physician will labour in vain if a cure has not begun with applying a leech under each ear”.

Consumption
“Young persons between the age of fifteen and thirty of a slender make, long neck, high shoulders and flat chest are most liable to this disease. Consumptions prevail more in England than in any other part of the world, owing perhaps to the great use of animal food and malt liquors and the great quantity of pit coal, which is there burnt, and to the variableness of the weather. We would recommend the Peruvian Bark, that being the only drug which has any chance to counteract the general tendency which the humours then have to putrefaction”

[With acknowledgements to the book: “The Lowertown Old Burial Ground and Life in Oxenhope 1807-1908”, where some of the information about this family came from.
If you would like to purchase a copy of the book, please contact the trustees on: OOBGT@lowerisle.co.uk]
Email ThisBlogThis!Share to TwitterShare to FacebookShare to Pinterest

Another good read!
Thanks