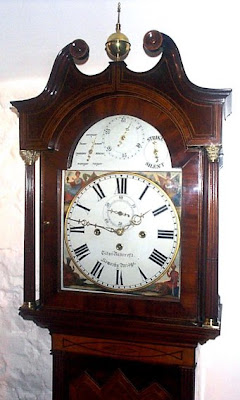 I have come across the name of Titus Bancroft, from Sowerby Bridge near Halifax, several times over the years as a noted watch and clock maker, and have tried to find more out about him, with little success.

What I have managed to find out was that he was a clock maker of some renown, specialising in church clocks.

He was born 13th February 1778 in the Halifax area, the son of Titus and Sarah [know as Sally] Kitson and baptised on 15th March 1778 at the Northgate End Presbyterian Chapel in Halifax. He died in Halifax on 17th May 1839 and is buried at St John’s Church Halifax.

Titus seems to have been a maker of watches and clocks in the period between 1809-1838. The local trade directory of 1822 lists him as a “Church Clock Maker” which in those days must have been an occupation of some importance, and it is know that he was producing larger clocks from as early as 1813, because a long clock came up for sale by auction in recent times, which had his name, together with that of his brother John inscription on the front plate…presumably they were business partners at the time. The clock shown below was auctioned some time ago and at the time was described as follows:
“A rare and important musical long case clock in a case of feathered mellow mahogany cross-banded in satinwood with boxwood panels and stringing and brass Cornithians to the hood. The substantial five pillar movement is of outstanding quality and plays on a carillon of eight bells, striking each hour on a single bell with a repeat mechanism. It also has an adjustable fly, beat adjuster and a most unusual feature of the days of the week, date and strike silent to the arch. It stands eight feet tall.”

He later went on to be a Church Clockmaker, and is credited with producing the clocks for the many local Churches, including the following:

St Thomas a’Becket Church at Heptonstall in1809, which was described as having an eighteen-foot pendulum and six-foot dial, and had the following inscription on the dial “ Titus Bancroft, Clockmaker, Sowerby Bridge 1809” The church now stands derelict, after being severely damaged by a storm in the 1850’s and the clock was then moved to a new Church built next to the old one. An article, written in 1947 about the new church described the clock at that time as “ Being in good going order”
The photo below shows all that is now left of the original clock tower. 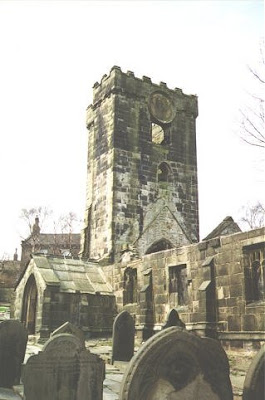 He also made the clock for All Hallows Church at Almondbury, near Huddersfield at a cost at the time of £250 in 1823. [The old photo below, is not the best quality, but thanks to Genuki-UK for supplying this.] 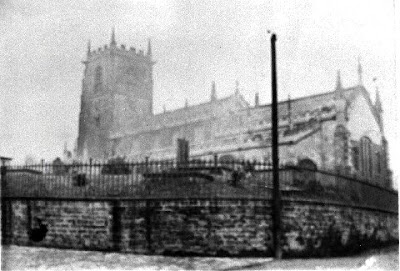 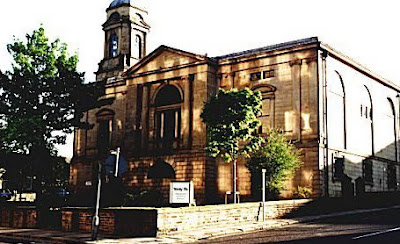 The last church clock that I can find any information on, which Titus built was the one at Skipton Parish Church in 1835, and which remained there until 1899. A record of the church trustees says the following about the decision to have a new clock
“The present clock replaces the one of 1769, which was of great age and appears to have been causing expense. In 1826, at a meeting of the inhabitants it was resolved that as the clock was so old and out of repair, it was expedient that a new ones should be purchased at once, the cost not to exceed £100, and that Titus Bancroft from Sowerby Bridge be employed to make the new clock on the following terms and conditions: The clock to strike quarters upon the first, third and fifth bells, and the hour upon the fourth and sixth bell, with all necessary appendages agreeable to the specification…to be fully completed within nine months, for the sum of one hundred and sixty pounds to be paid when the work is done, and no charge to be made for any extras”
The details of the clock were that it had two dials, one on the south and the other on the west side. The dial plate on the south side was circular and the one on the west side was octagonal. 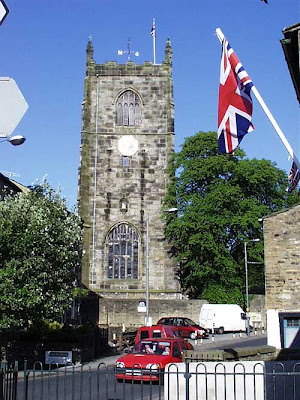 It is surprising that there is so little information about Titus Bancroft, bearing in mind that he had such an unusual and important occupation. Does anyone know anything else about him?
There are also records of a John Bancroft working in Scarborough, who was in the same business between 1780 and 1807 and also a William Bancroft also of Scarborough who was possibly the son of John, and had premises at Newborough Street in 1823. I am not sure if they are related to Titus…does anyone know anything about these three gentlemen either?
Email ThisBlogThis!Share to TwitterShare to FacebookShare to Pinterest

Thanks for another interesting article.

I have a John Bancroft Scarborough lantern (?) clock. It has had mixed fortunes but is now running well despite not having the original key!

As far as I know, John Bancroft from Scarborough, was the brother of Titus Bancroft from Halifax. There are old clocks on the market, which link the two brothers on the clockface.

I have the exact long clock by John and Titus that has been in my family several years and came from a family member in England. It is in great condition. If interested in the purchase or additional information please contact me at 812-230-2237 or callman33@gmail.com