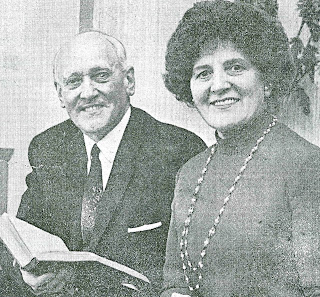 Here’s an interesting short story about Sydney Bancroft, who in his normal walk of life would have been considered a very conventional person, and yet he lived in a very unconventional house in Oxenhope near Keighley.

Sydney was born in 1906 in Oxenhope and led a very full and worthwhile life, firstly as a mill owner of the firm of John Bancroft & Co at Charles Mill Oxenhope, after taking over the running of the family business from his father in 1945. He retired after selling the business in 1957, and then spent much of his time working for several charities and for the community as a local councillor, and eventually as Mayor of Keighley in 1971 to 1972.
He was a lifelong member of Oxenhope Methodist Church and was a steward of the Haworth & Oakworth Methodist Circuit, and also had the unique distinction of being elected an Alderman by the local Council, when he was no longer a servicing Councillor.

Sydney & his wife Maud [Riley] had previously lived in a large house built by his father since their marriage in 1939, but then decided to have a new house called “Woodridge”, built in 1959….and what a house! Their main stipulation they gave to the architects when designing the house, was that there must be no need to go through one room to get to another, and so they were able to come up with this ultra modern design for the time, by designing a split level bungalow, suitable for a sloping site of one-and-a- quarter acres.

The local press at the time wrote an article about the new house saying
“ It’s like a book cover!”
“It makes you want to look inside!”
“The layout is given an added appeal through it being asymmetrical”
“ Some would call it variety, and others would say off- beat!”

The most striking feature of the house was the fact that it was designed with what was described at the time as a “Butterfly Roof” which, when built in 1959, must have been viewed as a little unusual, to say the least!

Here are a few things the newspaper had to say at the time about this state of the art property, with it’s up to the minute design features:

“It’s a home with a polished mahogany canopy above the front, which has a 26 ft stretch of south-facing windows overlooking the picturesque valley, with wild majesty of the moors beyond”

“When seated behind the open fire, with it’s underfloor draught, it is possible to enjoy the full warmth and at the same time appreciate the magnificent views”

“The kitchen ceiling is azure blue, and working surfaces are in red laminate…there is a dish washer, and also a steam extractor….the polished mahogany door is steam resistant”

“The front garden leads down to rose beds, and with the flowers give a froth of gaiety along the top of its low wall”


Sadly the house is no longer there. It was sold to a developer in recent years, who then demolished it and built five houses on the land that it had occupied. Below is a picture of the bungalow, taken from the newspaper at the time…sorry for the poor quality, but it’s the best I could find.