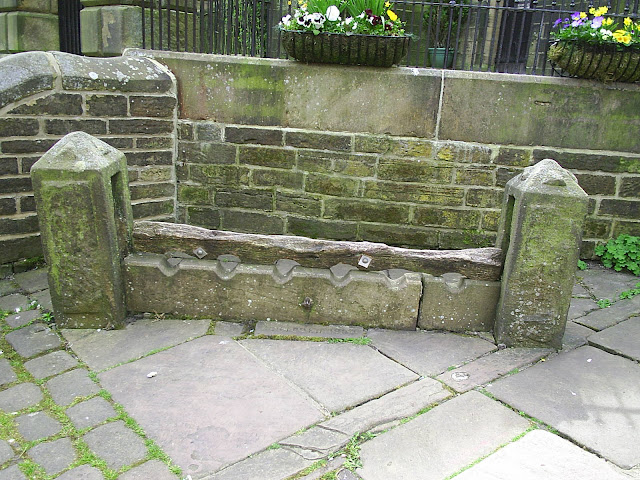 I was reading an old book recently, and was amazed to find some ‘shocking’ details about my Great-Grandfather Timothy Bancroft 1841-1900, who was known as Timmy. It seems that Timmy was not the quiet unassuming farmer’s son I thought he was, because on 8th May 1856, when he was just 15 years of age, he was in front of the local Magistrates on a charge of drunkenness in the village of Cullingworth where he lived. Also with him was a Davy Lambert on the same charge. Each was fined five shillings plus costs….or the alternative to this fine would have been to spend six hours in the stocks at Haworth. Following on from this revelation, I thought I would do a little research about the general attitude to drunkenness at the time, and about punishment of the stocks. Around this time the local Temperance Magazine produced the following ‘fire and brimstone’ warning to pub landlords: "If there is a business in which the candidates of hell are labouring, it is yours, and full well you know it. Were it not a conscience killing business, you would not take the last sixpence from the trembling hand of the drunkard and give him in relief a poison that, ere the next rising sun, may send him to his tomb. Were it not a demoralising traffic, you could not stand by unmoved, and see the last spark of mortality and virtue driven from the mind of a man by the poison you administer. Were it not an inferior business you would not be so assiduous in servicing the devil with victims for his abode of endless misery, for he exalts over every drunkard you prepare for the drunkard’s doom. Then cease this business of ruin, ere the cry of humanity ceases and ere the wrath of angry heaven be poured out upon your head, for God has announced “a woe to him who putteth the bottle to his neighbour’s lips”. The Stocks had been popular since medieval times, as a mild restraining device for minor offenders, and consisted of a wooden or iron frame to hold the head, hands or ankles. As can be seen from the photograph, the Haworth ones were of the ankle type. They were first introduced in 1376, when King Edward III had a law passed decreeing that every town and village had a set of Stocks. They were usually positioned in the most public place available in a town to give maximum humiliation to the offender, such as a village green or busy main road. 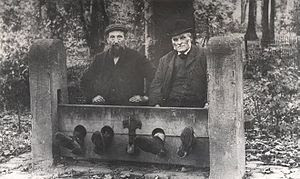 The Haworth ones are situated outside the front of the Parish Church on the old main street, as can be seen in the photograph. They have a plaque on them, which shows that they were restored in 1909, and they were possibly moved to this position at that time. The use of Stocks as a means of punishment started to gradually disappear from the mid 1850’s and the last recorded use of the Stocks for punishment in the UK was at Adpar in West Wales in 1872. As far as I know, Timmy did not spend his six hours in the Stocks at Haworth, so I assume his parents, Timothy and Sarah, coughed-up the five shillings fine and costs, to save the family embarrassment, and save young Timmy the humiliation.