The First Car in Oxenhope 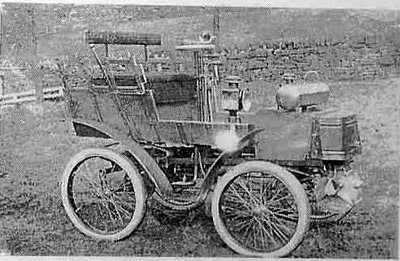 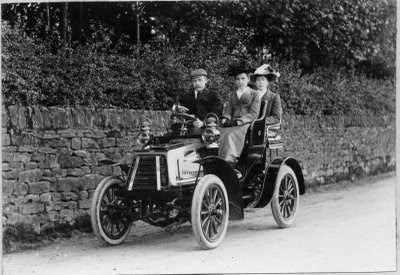 As I said in a previous article, I recently read a book called “ Lowertown Old Burial Ground & Life in Oxenhope 1807-1908”, which contains a mountain of information about the life and times of some of the people of the village.

One such person was John Walker Bancroft who was born around 1868 at West View House, Oxenhope the son of Joseph Riley Bancroft, who was one of the local mill owners and worsted manufacturers in Oxenhope, and who in 1870 had jointly inherited Charles Mill from an uncle.

John had a lifelong interest in engineering, and built Oxenhope’s first car. Construction started in 1889 and was completed in July 1900, and the car had the appearance of a small waggonette with big wheels.
A wheelwright at Oxenhope made the body and a firm of Keighley engineers, Messrs Judson & Hudson made the car to Mr Bancroft’s design. The vehicle was looked upon with awe when it travelled up the road, making a tremendous noise. The total weight of the car was about 7cwt and had a 31/2 hp water-cooled single cylinder engine, which was an experimental engine made by Allard & Co of Coventry. The shifting gear for the belts was controlled by handles on the steering pillar, giving two forward speeds, but no reverse. He ran the car for about 2000 miles before disposing of it in 1903.The two photographs show this original first car, and then John driving through Oxenhope with his two sisters in the next car he owned, made by the Victrix Motor Co in Paris.This second car was kept by him until 1919.

For 60 years John was connected with the firm “John Bancroft & Co”, worsted spinners at Charles Mill Oxenhope, and was a senior partner there for 54 years. He had over 50 years continuous membership of the Bradford Wool Exchange.

The 1901 census shows him living at Westview as a Worsted Manufacturers with brother Frederick and two sisters.

In later life he lived at Hillcrest, another large house in Oxenhope, which he had built when he married. He was married twice and first wife was Edith Lund.
They had two children Sydney & Ida. Sydney was a town councillor and later became The Lord Mayor of Keighley in 1971.

Any interesting fact about John, was that he had a nickname around the village of " Old Twine Toes"! It is not known how this came about, but nicknames were commonly used in the past when families did not move far from their roots, and as they tended to use family christian names often, several people in the village could share the same name. To differentiate between people with the same name, they would be given names with additional information such as John o' Jim [John son of Jim], John o'th far end [John who lived at the far end]. Other names stemmed from their appearance or habit, some no doubt mischievous or sarcastic, sometimes lingering on from schooldays.


John died at Hillcrest on 3rd August 1945, and was interred in the family vault at Oxenhope Cemetery. The newspaper at the time reported in his obituary “ He had a lifelong association with the Methodist Church and was secretary and treasurer of the Sunday School for nearly 40 years. He was an excellent conversationalist and could recall many amusing incidents in connection with his travels to Bradford on market days and of life in the village”