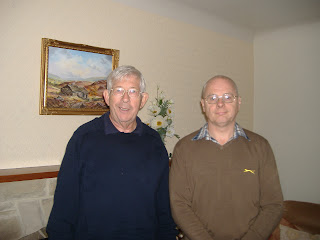 The photo shows Steve Pick & myself, when he can to visit me recently at home while on holiday in Yorkshire.
Steve was born in Barrow-in-Furness and after extensive travelling around the world, settled in Texas US in the mid 1980's.
We are both decended from Joseph Bancroft who died at Oxenhope in 1785. Steve is decended from Joseph's son Timothy, and I am decended from another son, also called Joseph.
Steve's G/Grandfather, Jabez Bancroft 1833-1897, was a very interesting character who amongst his many hobbies was also a Taxidermist! After his death in 1897, his widow, Elizabeth, sold his entire collection of over 1600 items of birds, butterflies and eggs to Keighley Corporation for the sum of £130, and it was then displayed in the local museum here in Keighley.
Email ThisBlogThis!Share to TwitterShare to FacebookShare to Pinterest