The Weaver’s Complaint….a poem from 1834 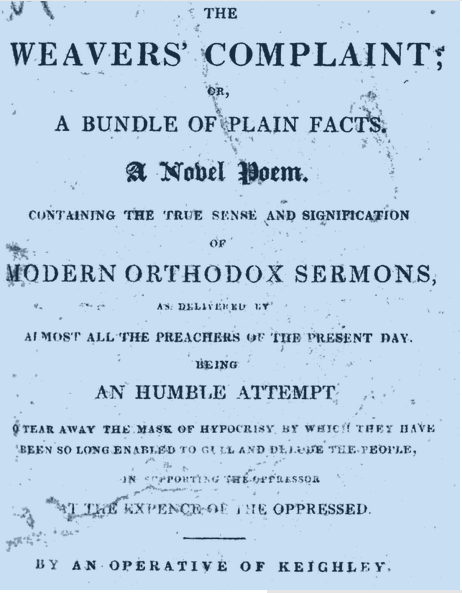 I recently came across a rather long poem written anonymously by someone from Keighley in 1834, which gives a vivid insight into the life of a weaver, and his family around this time, as the industry moved from the cottage to the mill.
There are many examples of 18th and 19th Century BANCROFT families earning a living from hand loom weaving in their homes, before the invention of machinery, which made production on a large scale possible in the mills, and spelt the demise of this cottage industry.
An insight into the living conditions of a hand loom weaver in the nearby village of Heptonstall, is graphically described in the following extract from the book 'The History of the typhus of Heptonstall Slack' by S Gibson:
" The reminiscences of a Heptonstall Handloom Weaver, born in 1809, shows just how low was his standard of life in this period. His cottage had no under-drawing, was cold and damp, and snow blew in during the winter. His bedding consisted of two cotton blankets, a rough cotton quilt and pillows filled with chopped straw. Furniture consisted of a three-legged table, two old chairs, two three-legged stools and a chest of drawers. Food was monotonous and poor and utensils were scanty. His porridge pan doubled as a frying pan. Owing to a shortage of knives and forks, some of the family ate with their fingers. There were a few broken cups and saucers, and old teaspoon and a jug for fetching milk. The diet consisted of porridge, old milk, treacle, potatoes and oatcake. For dinner he had fried suet with salt and water for gravy. Occasionally he had tea or coffee, but normally drank a brew of mint, hyssop or tansey from the garden. He worked an 11 and a half hour day for 6/6d per week."
Only in the 1840's, in the woollen industries, did the power looms in the factories competed fully and directly with hand looms. Until that time the two existed side by side, with the hand loom weaver reduced to being an auxiliary of the factory, but not yet driven out of existence by competition. Their role was to take up the slack in boom times, and to bear the first brunt of recession. They also acted as a check on the wages of power loom weavers, most of whom were women.
The owners of these newly set up mills were known for their exploitation of their workers, and especially the children who worked for them, and this is vividly shown in the poem.

Here are the first few verses of the poem:

'Draw near, honest people, of every degree
And listen a little, I pray unto thee
While I shall attempt to unfold in my tale
A few of the tricks which in England prevail

Then first, for the weavers, a set of poor souls
With cloths on their backs much like riddles for holes
With faces quite pale, and eyes sunk in the head
As if the whole race were half famished for bread

Indeed, when these wretches you happen to meet
You think they were shadows you see in the street
For thin water-porridge is all they can get
And even with that they are often hard set…..

The weaver stands staring, the master shouts out
“ Come take this five shillings, or else go without
For charity’s sake, I employ you you know
Or else to the workhouse you’d soon have to go”

At last the poor weaver is forc’d to submit
This workhouse has frightened him out of his wit
So take it and think so, tho’ it only small
Five shillings are better than nothing at all'

The full poem, all 50 pages, can be downloaded here, but please be aware that much of it is a bit rambling and not just relevant to the life of a weaver.